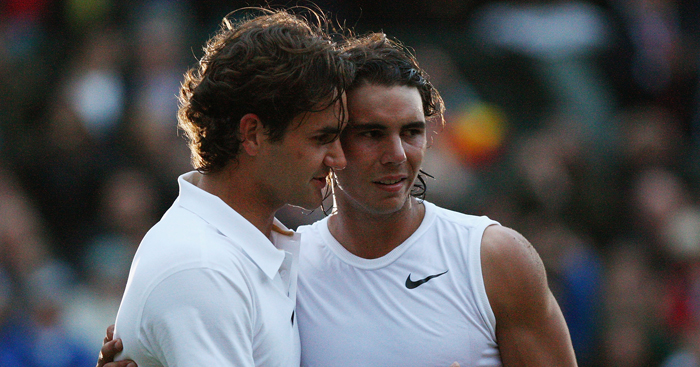 Rafael Nadal has hinted that Roger Federer avoids clay court season to avoid him, but is there anything behind the theory? Michael Graham crunches the numbers.

“These are two of the greatest players of all time playing in the same decade. You have to just sit back and enjoy it.” – Pete Sampras.

If there was ever a concise summary of the Rafael Nadal/Roger Federer rivalry, then Pete Sampras probably delivered it.

Just like with the Lionel Messi/Cristiano Ronaldo debate in football, the danger is that you over analyse it to such an extent that you forget to actually enjoy it.

Men’s tennis has not been short of great rivalries, of course. You have Bjorn Borg and John McEnroe, Sampras and Andre Agassi, Jimmy Connors and Ivan Lendl to name but a few over the decades. Some may, and even do, argue that any debate about the greatest player in the modern age is utterly and insultingly incomplete without Novak Djokovic’s name being in there too.

However, there is something undeniably colossal about the Federer and Nadal tussle. It has endured the years and it remains today. We will probably still be debating it in 20 years’ time.

This week, Nadal made a bold insinuation, when he all-but claimed that Federer’s decision to skip clay court season this year was a concession that he cannot compete with the Spaniard on the surface.

He essentially accused the Swiss legend of running scared and writing off this chunk of the season because he knew he wasn’t going to get the better of his long-time rival, so he’d save his energies for other battles.

He may be right, but whether he is or not is almost immaterial now, because the question is now out there to be examined – and examine it we shall. 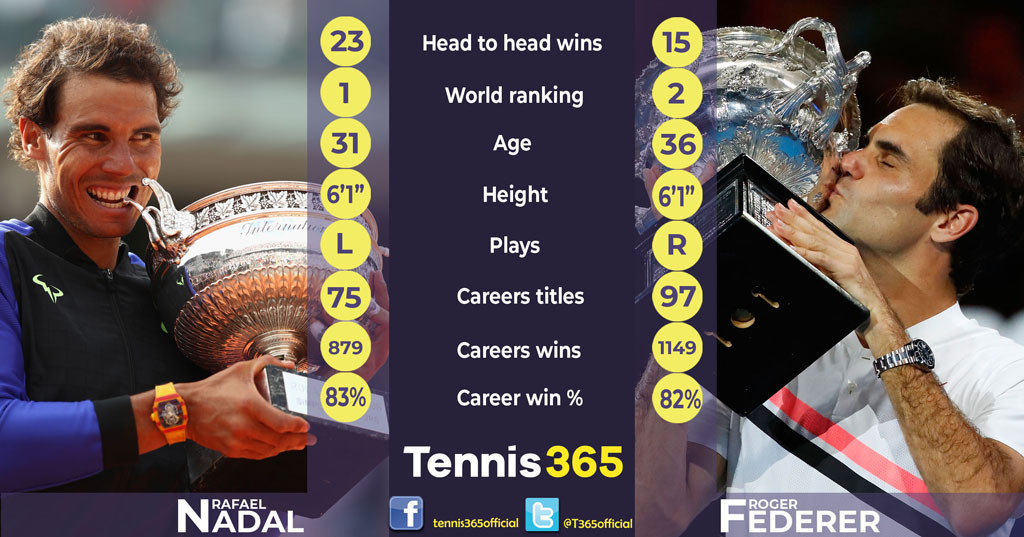 The first thing you have to say is that we are looking at two sets of absolutely spectacular numbers here.

On the surface, Nadal certainly has the best of the overall meetings, but they are remarkably similar in terms of achievement. Indeed, averaged out over the amount of full seasons they have played as a professional, they tend to win the same amount of matches and tournaments as each other year by year.

However, Nadal’s superior head-to-head record is noteworthy simply for the fact that, given the age difference, during their earlier meetings he was a boy playing a man – and he won five of their first seven matches.

The other thing to stress here is that, given they have dominated the rankings for so long, they have usually been kept apart in tournament draws by seeding. Of their 38 career clashes, 24 have been finals and a further nine have been semi-finals. Generally, when these two have met on court, the stakes have been high.

On the tennis circuit, the hard court is probably the great leveller. It requires the most rounded, least-specialist skill-sets, and so it’s no huge surprise to learn Federer and Nadal are very evenly matched on the surface. 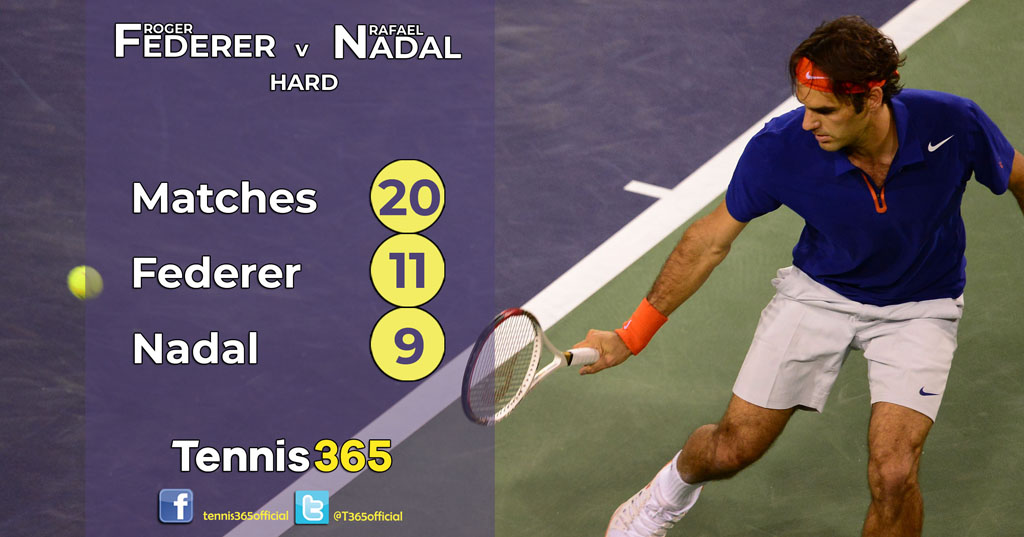 Their first two meetings were both on the hard courts of Miami and the shares were spoiled, although Federer could certainly make a case for his being the greater of the two wins given his was in a final.

That first meeting was in the round of 32, one of only two occasions (outside end-of-season ATP Finals) when the pair have met before the quarter-final stage – the other being a round-of-16 clash at Indian Wells in 2017.

It has been generally even, though. Federer is currently on a five-match winning streak against Nadal – all on hard surfaces. Before that, Nadal won five straight – four on hard.

If anything, their record against each other on grass proves how rare top-level grass-court events are on the ATP tour. 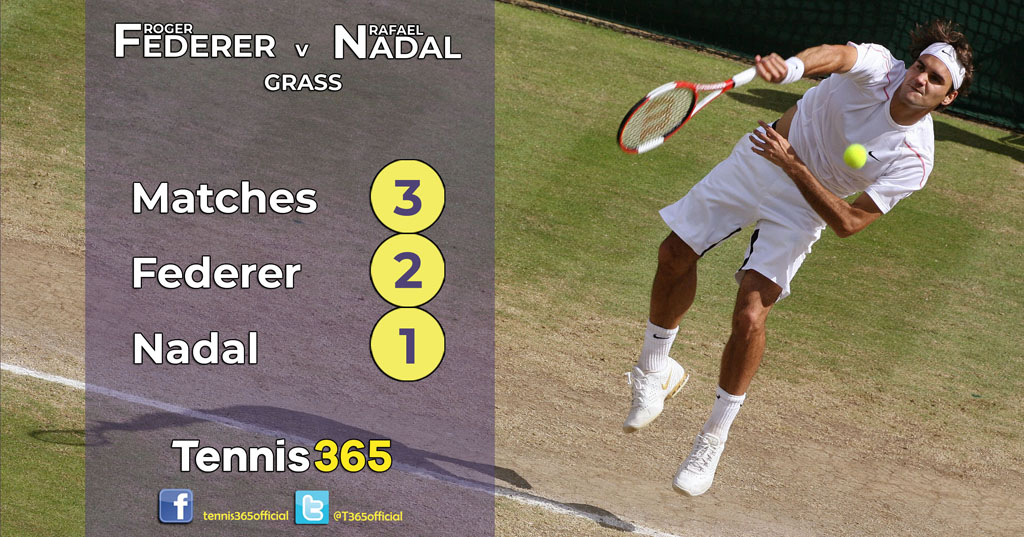 They have met just thee times on the surface, all at Wimbledon – and all finals.

Federer won the first two, in 2006 and 2007. He only needed four sets to win the first, but Nadal pushed him to a fifth set the year after.

It was 2010 when Nadal came of age on grass, though, beating Nadal 9-7 in the fifth set to win Wimbledon and complete his career Grand Slam.

Of course, grass is so rare that you could argue it tells us very little about the rivalry.

Now, the surface that prompted those controversial comments from Nadal.

“He said a couple of days ago that he would love to play against me again on clay, best of five sets, so I thought he would play Roland Garros,” said Nadal of Federer before he started his defence of the Monte Carlo Masters.

“Then a few days later he says he will not play. A little bit of a contradiction.”

Looking at the clay head-to-head, it certainly adds fuel to the fire.

Nadal has utterly dominated Federer on clay, and clay is the primary reason why Nadal has the best of the head-to-head between the two. You simply can’t deny it.

If Federer is fed up at losing to Nadal on clay, it would be understandable given that 13 of their 15 match-ups on the surface have been finals. Of those 13, Federer has only got the best of the Spaniard once, in Hamburg in 2007.

It was Federer’s first win over Nadal on clay, and broke his rival’s 13-tournament clay winning streak. He heralded it as game-changer at the time, saying: “It’s absolutely a breakthrough. It will be interesting to see how we both react in the French Open.”

Pete Sampras: “I don’t know. If you look at the numbers, you have to look at Roger.

“You can talk about it for 20 minutes, on the different comparisons: Certainly, Roger has been the best player for the last 10 years. Rafa is up there with him. [Novak] Djokovic is pushing. So it’s hard to say.

“Roger has been so dominant. He has won on all surfaces. He’s a phenomenal player. He lost some of those matches [against Nadal] on clay, which is Rafa’s best surface; there is that argument – whereas Rafa has won all the majors, been No 1. You could argue that he’s well up there.”

Karolina Pliskova: “I think for me Roger’s not playing better than he was playing a couple of years ago, but right now he has found a great form.

“I feel like he’s enjoying what he’s doing. It’s always fun to watch him.

“By having Nadal there, I think it helps him (Federer) remain ultra-competitive.

“This is helping both to get better still, although they don’t even have to play because they have won so many things. But they’re still trying to be the best. For them, I think to get back to No 1, it’s amazing and special.”

Caroline Wozniacki: “Roger is such an incredible athlete and obviously a great champion. And I think he deserves it. I think both him and Rafa deserve to share the No 1 spot. So yeah, it’s pretty great.”

John McEnroe: “A few years ago, before he got injured several times, his (Nadal’s) stats were probably better than Roger’s, such as the Davis Cup and Olympics record, and the head-to-head meetings as well.

“Then when Nadal dropped, Roger is back to knock the door. If we look at the amount of Grand Slam semi-finals reached, Roger is obviously the most consistent player. I don’t think winning nine or ten times in Paris could make any big difference.

“It would be different if he wins Wimbledon two times, or US Open another time, or if he won the Australian Open final this year. These wins would change people’s perspective towards Nadal.”

Conclusions
McEnroe’s comments are interesting in that they raise the element of perception to the argument. Fair or not, Nadal’s perception of being a clay court specialist has probably damaged his standing in the argument.

Is Federer deliberately avoiding Nadal on clay now, though? Possibly, but at the age of 36 and with a Roland Garros title and career Grand Slam to his name, he probably feels he has proven all he wants to on the surface.

The year he won it, 2009, Nadal was knocked out in the fourth round in a huge shock by Robin Soderling, so all you could really say to counter such an argument is that Federer has never beaten Nadal to win the French Open.

However, perhaps Sampras’ views ring truest of all. We should just be enjoying these two players while we can, although Nadal would probably argue, and is probably arguing, that that is a lot easier when they both show up!