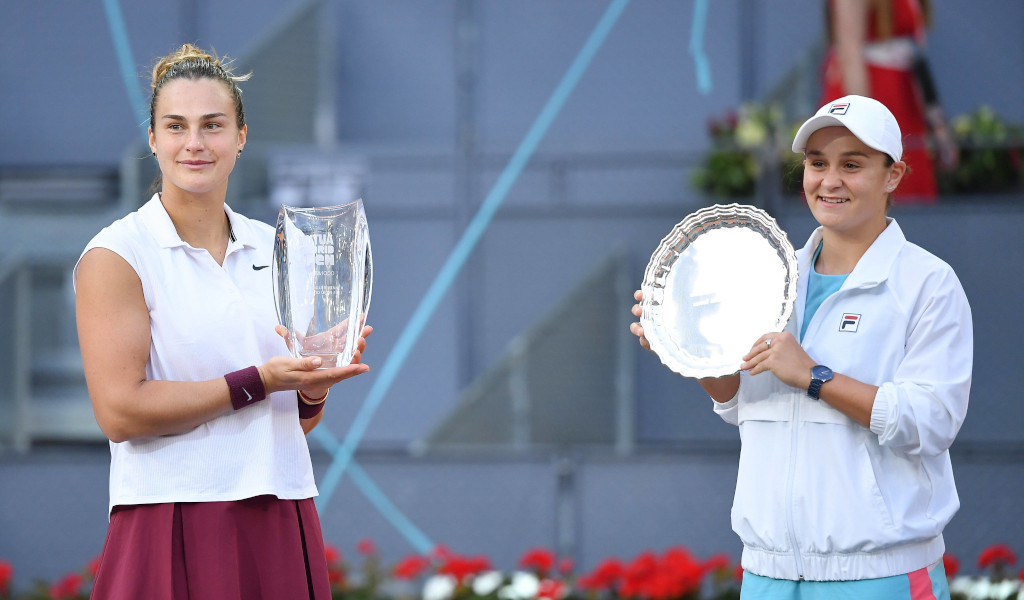 For so long, women’s tennis has been accused of lacking genuine rivalries to create interest and boost the platform of the WTA Tour.

Though there are arguments that would back this point of view over recent years, the emergence of two new forces on the WTA should surely put an end to this.

When 23-year-old Aryna Sabalenka and 25-year-old Ashleigh Barty met in the Madrid Open final over the weekend, it was the eighth time that the two have faced off on court.

Their first meeting came in the first round of the Australian Open three years ago, and this year alone they have faced off in three-set matches in the Miami Open last eight, the Stuttgart final and then Saturday’s final at the Caja Magica.

Having found her feet on clay courts, Sabalenka’s 6-0, 3-6, 6-4 victory in a high-quality final against the Australian world No 1 was hugely significant.

Her runs in Madrid and Stuttgart show she is a force on all surfaces and have pushed her up to a new career-high of fourth in the WTA Rankings, as well as level her head-to-head against Barty at 4-4 after losing those first two meetings in 2021 – something she admitted motivated her ahead of the final.

“I always want to win the match, but when you are losing two matches in a row against one opponent and then you have to face her in another final, you’re kind of a little bit, this time I have to win it.”

Aryna Sabalenka wins her 10th career title and 1st clay title @MutuaMadridOpen and will rise to No.4 in the rankings on Monday. pic.twitter.com/5JMyDm6YTU

Whilst Barty, who has already won three titles in 2021, has played against the likes of Naomi Osaka, Bianca Andreescu and Iga Swiatek, it is her meetings against Sabalenka that have occurred most frequently.

The Belarusian is yet to make the last eight of a Grand Slam singles event, whilst Barty is already a major champion, though she has become a dominant figure on Tour and she has become the performer on the WTA Tour this season alongside the Australian.

It is a rivalry that not only pits a contrast of styles, with Barty’s variety up against Sabalenka’s raw power, but one that can be competitive on all surfaces and one that will likely continue for years to come.

Proud of our week 🧡 pic.twitter.com/gPUxziArvv

It is not just on the WTA Tour that rivalries between younger players are developing.

Though the ATP Tour is still dominated by the seemingly immovable figures of Novak Djokovic and Rafael Nadal, there have been more frequent meetings between the ‘Next Gen’ of players who will likely win the majority of Grand Slams once those two retire.

Five of the seven meetings between Stefanos Tsitsipas and Andrey Rublev have come since the resumption of Tour action post-Covid last August, whilst the likes of Alexander Zverev and Daniil Medvedev have also been involved in several meetings against each other and others of their generation.

The younger generation of WTA players such as Barty and Osaka have had more opportunities to progress than their ATP contemporaries, but there has been a slight sea change across the sport as a whole.

There are a greater number of matches between players in their early and mid-twenties, with these matches taking place on bigger stages and on bigger occasions.

Though it may be a few years yet before this younger generation is dominant across both Tours, rivalries within it are developing, and this is something to relish in the decade to come.