COMMENT: Tearful Rafael Nadal brought to his knees… before he finds his feet 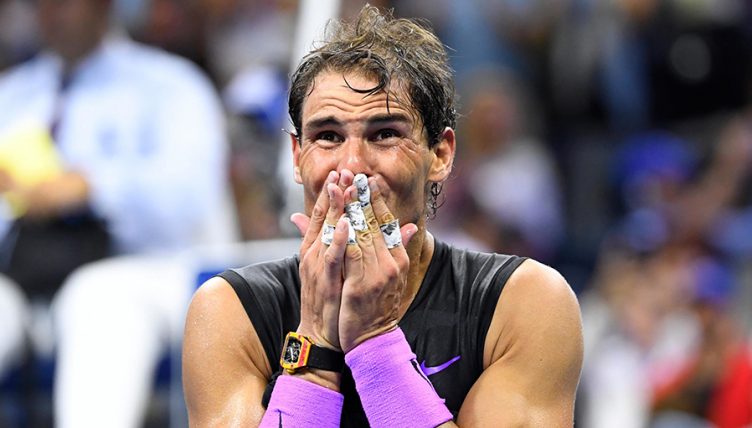 After witnessing what was undoubtedly an instant classic of a final between Rafael Nadal and Daniil Medvedev at the US Open, Kevin Palmer hails both players for a remarkable spectacle.

As the clock ticked past four hours and 17 minutes on Arthur Ashe Stadium Court, Rafael Nadal’s towering presence belatedly got the better of the heroic Daniil Medvedev.

After 28 breathless shots from two unrelenting warriors who served up a tennis match of relentless brilliance in front of a raucous New York crowd, Medvedev scooped a shot into the path of an onrushing Nadal who finally fired the fatal dagger into the heart of his Russian rival.

His celebrations were muted as he took a giant stride towards Grand Slam title No.19 with a backhand pass that gave him a break of serve, yet that absent emotion was understandable after all that had gone before in an epic tennis match that deserves to be instantly installed among the greatest contests in this golden era for the sport.

As he won the first two sets and went a break up in the third, Nadal’s march to within one major title of his great rival Roger Federer appeared set to be routine and yet what was to follow was as thrilling as it was incredible, as gripping as it was unfathomable.

How did Medvedev come back from the point of no return and get himself into a position where he seemed to be in the ascendancy in the fifth set?

None of this made sense until we saw Nadal standing there once more with the US Open trophy in his hands, and that vision became reality in a decisive game in the firth set.

From 40-0 up on his own serve at 2-2 in the decider, Medvedev spurned chances to keep the momentum on his side and once he gave Nadal a glimpse of salvation, he did not blink.

Just four frantic games later, the Spaniard was slumped on the court toasting his fourth US Open crown, after a match he may well remember as one of his most epic.

There have been the iconic battles with Federer that have defined the sport for a decade and more, his bruising contests with Novak Djokovic that have been a series of brutal sporting brawls this was different.

Here was a rival who had never been in this position before, making a mark in his first Grand Slam final that suggests he belongs on the grandest of stages.

The cheer for Medvedev as he won the third set was inspired as much in sympathy for the Russian, who looked set to be outclassed up to that point, but the mood had changed by the time he won the fourth and had Nadal rocking on the ropes in alarming fashion.

All that before a classic fifth set that included two Nadal breaks of serve and a reply from Medvedev as he broke the Spaniard as he served for the match for the first time.

Two code violations for Nadal in the fifth set added to the drama, but in the end it was the serial winner who emerged victorious once again.

After saving the first match point against him with a stinging backhand down the line, Medvedev finally ran out of answers as Nadal served out for the match at his second attempt and we were all left to try and fathom out what we had just witnessed.

Tennis continues to scale its boundaries like few other sports and, while Medvedev will be etched into the record books as a loser in this unforgettable contest, history may well confirm that this was, in fact, the night he joined the game’s elite.

As for Nadal, his legend was secure long before this memorable victory that was secured amid a nervy final service game loaded with uncertainly and tension until Medvedev finally hit the last shot of the match over the baseline.

A match none of us wanted to end had to reach a conclusion and while the winner was ultimately predictable, the route Nadal took to get there was anything but.