COMMENT: Why Novak Djokovic can’t win over the London crowd – and why he won’t care one bit 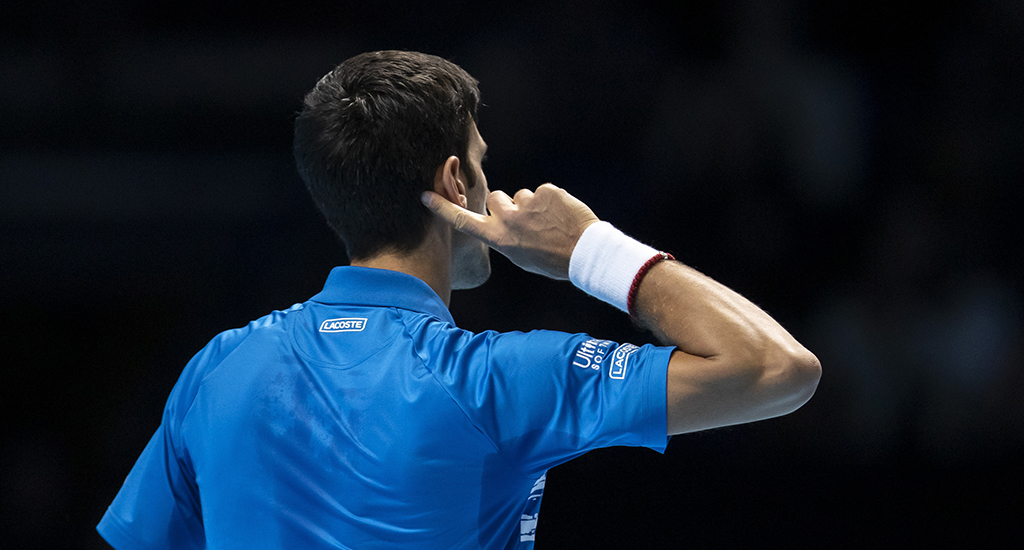 The ATP Finals last month proved, if any proof was necessary, that the London crowd and Novak Djokovic simply don’t get along. Michael Graham examines that rocky relationship further.

Novak Djokovic has a glorious history in London. There is absolutely no denying it. His record speaks for itself.

The Serbian star has won Wimbledon five times and four ATP Finals titles at the O2. In terms of male tennis players in the Open Era, only Pete Sampras and Roger Federer can lay claim to a better record in London. It’s just a fact.

It is strange, then, that Djokovic has such an inharmonious relationship with the London crowds.

Following his defeat to Roger Federer at the ATP Finals last month, Djokovic was diplomatic to the press and played down the behaviour of the crowd that day.

“Look, it was an important match, and I think every time I face Roger or Rafa [Nadal] anywhere in the world, there’s a lot of excitement,” he said.

“So it was a full stadium, which was nice to see. It was loud. It was electric. You know, it was a good atmosphere.”

That was not the full story, though. Djokovic became visibly more dejected with the crowd’s support for Federer as the match went on, and after defeat he stomped off court with barely a nod of acknowledgement to those in attendance.

There is, of course, a political edge to this. As head of the Players Council, Djokovic played a key role in ousting Chris Kermode as ATP Chairman, and many believe a key motivation for that was the Australian’s support for keeping the end-of-year finals in London.

Kermode was given his notice, much to the displeasure of other top players on the Tour, and the ATP Finals were just about immediately awarded to Turin from 2021.

Whether or not that was what Djokovic wanted, only he knows, but it’s clear he can’t be seen to have wanted it, which probably explains the post-match comments that were wholly out-of-sync with his on-court demeanor.

But let’s get this absolutely clear: Djokovic had every right to criticise the crowd that night, and I say that as someone who was part of it.

He was unfairly and downright disrespectfully treated, with double-faults cheered and nothing more than a polite almost begrudgingly obligatory round of applause offered for some brilliant winners.

I even recall feeling the burning of disapproving eyes on me when I applauded his tennis from others around me.

The treatment of Djokovic that night was a disgrace, and I have no problem calling out as such.

‘I almost felt sorry for him as well because he’s done so much for our game,’ Amazon Prime analyst Daniela Hantuchova said after the match.

“What else does he need to do to get respect from this crowd?”

The problem that Djokovic has is that he is everything that the British public traditionally doesn’t really like in their sportspeople.

That’s no slight on him, far from it in fact. The British mentality is generally pretty quirky and distinct.

Flamboyant, deeply flawed characters who lose, but do it courageously, are embraced and loved, players such as Goran Ivanisevic and Juan Martin del Potro, for example. While Del Potro is loved by the US Open crowd for winning it, in London he is loved for not winning, yet keeping on trying and remaining generally likeable despite enduring some absolutely rotten luck over the years that would have driven other players to complaint.

Djokovic, then, as a ruthless, coldly efficient brilliant winning machine is on a hiding to nothing pretty much immediately with British sporting audiences.

He even moves in a way that appears to exude authority – his chest puffed out, his walking pace slow and deliberate, his head always high and proud – in terms of sheer presence, Djokovic has undeniable swagger on court.

It is, though, the thinnest of thin lines between authoritative swagger and tedious arrogance, and if you are going to be harshly judged on that anywhere in the world, it’s Great Britain.

Whether Djokovic can ever ‘win over’ the British crowd remains to be seen, but ultimately, why would he even want to?

RELATED: ‘I felt sad for Novak Djokovic. What does he have to do to get a crowd on his side?’

The very things that make him such a great champion and brilliant competitor are the reasons why the British public struggle to love him. He’s too good, too robotically efficient, too strong in adversity.

Djokovic is, in short, the antithesis of what the British embrace as a great sporting hero. It’s a simple personality clash, if you like.

That said, given Djokovic’s record in London, it’s pretty clear who that clash serves better and who is coming out on top, and it’s not those fans who stubbornly refuse to appreciate the too-often-maligned Serbian.