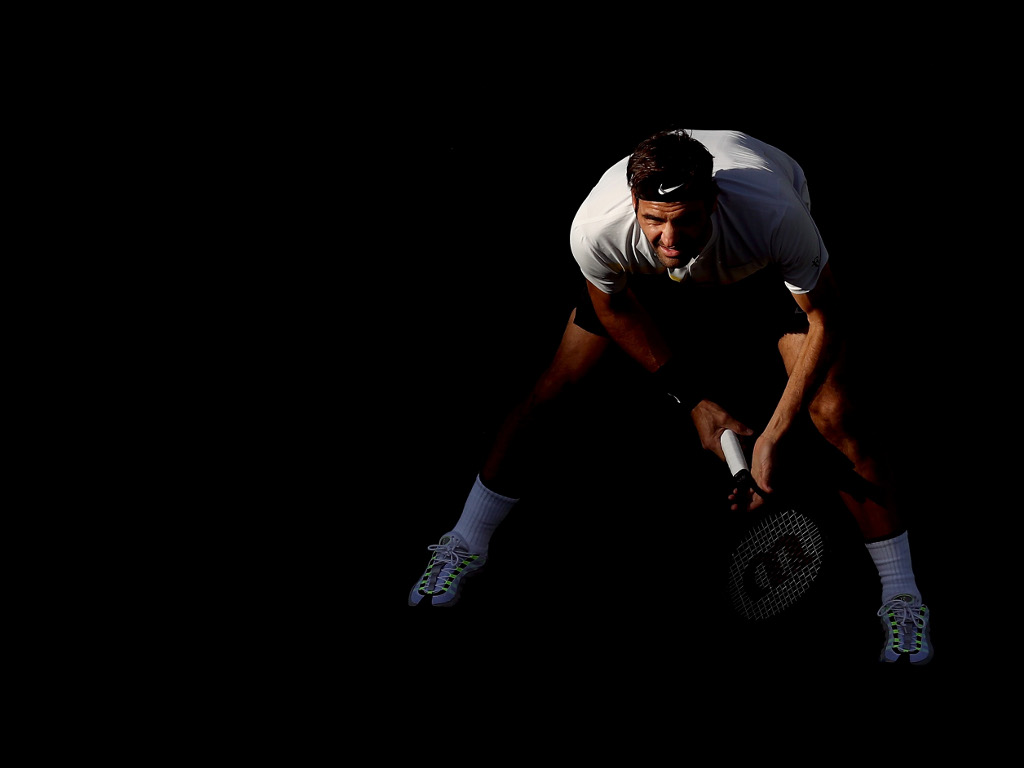 Our friends at Tennisdrills.tv take a look at the skills that Roger Federer employs which makes him so successful.

These are men who have transcended their sports to become cultural icons. They are symbols of greatness. Symbols of what humans performing at the highest levels can achieve. They remind us of what is possible.

If you’re a tennis fan, Roger Federer will also be included on this list. After winning the Wimbledon for a record eighth time, Federer has cemented himself as one of, if not the greatest tennis player to ever walk the earth. With over 100 total victories during his career, it’s hard to argue with anyone who puts him at the top of the tennis pantheon.

Even Rafael Nadal, one of Federer’s greatest opponents, once said about him, “If anyone says I am better than Roger, then he doesn’t know anything about tennis.”

Like other great athletes, Federer is more than an athlete. But without a doubt, he is an incredible tennis player. He has turned tennis into some beautiful – an art form or dance of sorts.

Preethi Ramamoorthy wrote this regarding Federer: “In Plato’s scheme, the concepts of truth and beauty are closely related. And Federer’s tennis has always been described as beautiful. John McEnroe, the sport’s previous presiding genius, once called him “the most perfect player” — almost suggesting that this is how the game should be played.”

What is it that sets Federer apart from others on the court? Why has he been so successful? What skills does he employ that make him so good?

Here are 5 reasons why Federer has been so successful.

1. The Eastern Grip
Unlike most amateur tennis players, who use a semi-Western Grip, Federer holds his racket with a modified version of the Eastern Grip.

Using the modified Eastern Grip allows Federer to quickly transition between forehand and backhand during volleys. It also allows him to more easily flatten out his shots, reducing the amount of topspin on his shots.

Shots with less topspin don’t bounce as high, in turn making them more difficult for opponents to track down.

Federer almost always employs a mostly open stance, which gives him a full, unhindered view of the entire court.

However, using such a stance requires an enormous amount of core strength since he must rotate his entire torso through his stroke. At the conclusion of his stroke, his right shoulder is facing his opponent, meaning he is rotating 90+ degrees on every stroke.

3. Economy of movement
Federer’s most recent victory came at age 36, which is amazing given that most athletes peak in their mid to late 20’s. His success, in some measure, is probably due to his ability to cover the court with minimal movement.

In 2015, Federer covered the least distance per point among the big four (Andy Murray, Nadal, Novak Djokovic, Federer), at only 9.7 metres per point.

This economy of movement allows Federer to preserve energy during his matches. This minimal energy expenditure is increasingly important if a match goes long.

John Colapinto says: “The impression, as others have pointed out, is of weightlessness, gliding; McEnroe is fond of saying that it is Federer’s exceptionally light footwork that has prevented him from injuring his knees on the hard court, like his rival Nadal and so many other men on the tour. McEnroe also likes to compare Fed’s footwork to Baryshnikov ’s, and to ballet in general.” 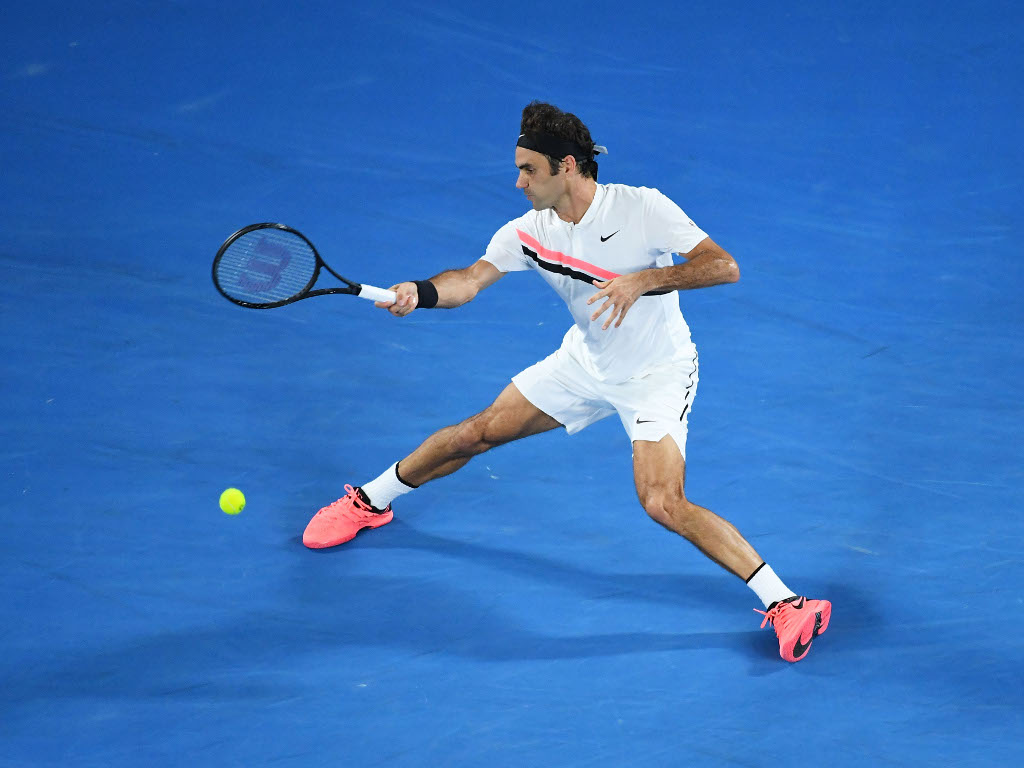 Federer’s ability to mix up his forehand constantly keeps his opponents off balance. He avoids set patterns, which prevents opponents from knowing where and how he’s going to hit the ball.

Just how much does Federer rely on his forehand? As The Telegraph notes: “Roger Federer’s forehand unleashes hell like no other. It sounds like a cannon going off: the fluid, racquet-head speed is off the charts. In the five years from 2000-2014 at the London Tour finals, 73% of Federer’s winners from the baseline were forehands (23% backhand). At every opportunity, Federer will run around a backhand in the advantage court to upgrade to a forehand.”

What’s essential to note is the technique behind Federer’s forehand. Before unleashing his forehand, he first positions his body properly, ensuring his core, shoulders, and racket are properly positioned.

Then, using a compact and fluid takeback, followed by a full core rotation, he powers his entire body through the ball, driving it at his opponent with incredible amount of force.

Notice the fluid, whiplike motion of his racket as it hits the ball. As one tennis coach notes: “As Federer prepares to meet the ball, his forehand is usually noted for having an extreme acceleration in the last 18 inches before contact is made.

This is due in large part to the position of his wrist, which is bent almost entirely back from the racquet, ensuring another whip-like component that will add punch to the shot. That position of the wrist will also give Federer the option to hit his inside-out forehand if he so chooses.”

Federer employs a variety of tactics with his forehand, using it to move his opponents all over the court, tiring them out and keeping them off balance.

Many times, he uses a crosscourt forehand to push his opponents to one side, then drives it down the line with another forehand. Alternatively, he can send it crosscourt again using a backhand or inside out forehand. The effect is that his opponents find themselves exhausted and confused as to where the ball will go.

5. A strong backhand
Federer also has a unique backhand that generates far more spin than that of his rivals. For comparison:

Federer’s backhand, which he markedly improved after being injured in 2016, was one of the key reasons he was able to recently beat Nadal, who had previously been able to take advantage of Federer’s backhand.

Federer said: “I think I’ve gotten really confident, a lot of practice at the end of the season. Then, at the beginning of the year when I started to play again, I was able to step into the court and drive the backhand more frequently than I ever have before. I used to use different tactics by slicing more [and] then going big on the second shot, but I’ve turned it around to some extent.”

Conclusion
While watching Federer, it can be easy to forget how much time and sweat he has put into becoming the greatest.

Speaking of the greatest, Malcolm Gladwell said: “Once a musician has enough ability to get into a top music school, the thing that distinguishes one performer from another is how hard he or she works. That’s it. And what’s more, the people at the very top don’t work just harder or even much harder than everyone else. They work much, much harder.”

The same can be said of athletes like Federer. All we see is the man effortlessly gliding around the court, striking the ball with precision and grace. What we don’t see are the 10,000 hours of practice – the blood, sweat, and tears.

Perhaps all of us owe Federer a word of thanks. It’s a privilege to watch him play.

Visit Tennisdrills.tv for the world’s largest collection of tennis drills for coaches.