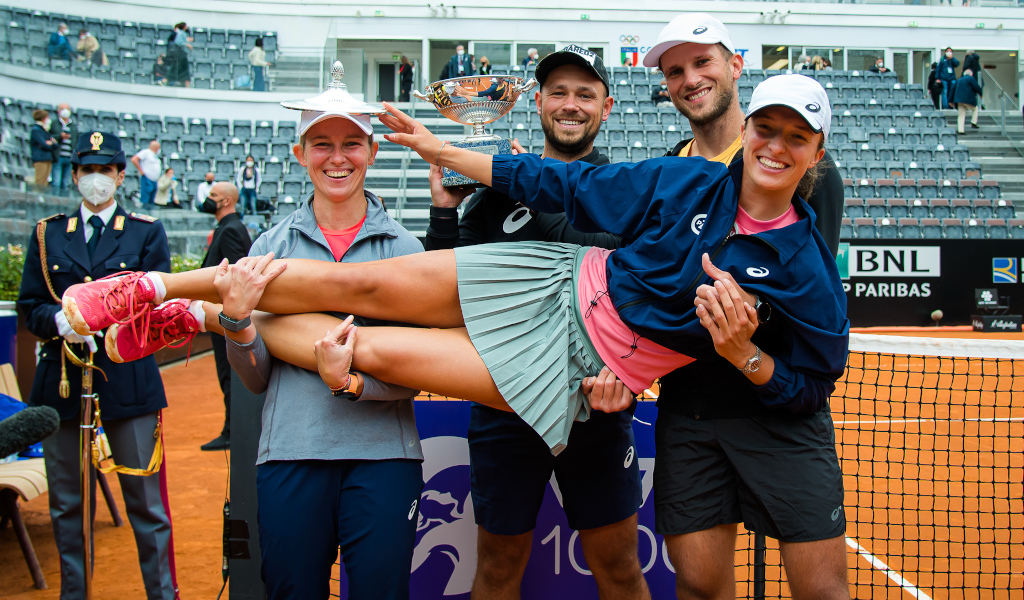 Very few players have quite progressed at the same level as Iga Swiatek over the past few months.

Ranked outside the top 50, the Pole didn’t drop a set on her way to the French Open title last October, and backed that up with a run to the last 16 at the Australian Open and the title in Adelaide.

After that, Swiatek had been rather unlucky with her draws, with the revised ranking system meaning that she often came up against top players earlier on than you would expect.

World No 1 Ashleigh Barty and two-time Grand Slam Garbine Muguruza are among the players that Swiatek has fallen to, but her triumph at the Italian Open was a hugely significant one.

Her third career WTA title means that she is now a top-10 player, which should give her kinder draws as she looks to progress even further up the rankings.

However, it was the type of tennis she demonstrated in Rome that could make her the favourite when Roland Garros begins in less than two weeks.

It wasn’t easy for her early on. Against Barbora Krejickova in the third round she was down a set and saved two match points as she rallied to beat the in-form Czech 7-5 in the deciding set.

That kind of result highlights the mental toughness she has developed thanks to working with a psychologist and gaining more experience, though what is also impressive is her form following that.

In the space of a few hours, she beat both two-time Rome champion Elina Svitolina and Coco Gauff without dropping a set to secure a meeting against ninth seed Karolina Pliskova in the final.

Pliskova had been playing her best tennis since Brisbane in 2020 and carries a huge pedigree. Not only is she a former world No 1, she was the champion in Rome in 2019 and runner-up last year.

Yet, on Sunday Pliskova was handed the most lopsided loss imaginable by Swiatek. The Pole dropped just 13 points in 46 minutes to prevail 6-0, 6-0 and win her first WTA 1000 title.

The mental toughness and form she displayed in Rome stands Swiatek in good stead ahead of her title defense at Roland Garros.

It is hard to assess where she stood in the pecking order for the French Open ahead of Rome, but she is perhaps now at the very top of it.

Not only has she demonstrated incredible form, two of her biggest rivals are injury doubts for the event.

Simona Halep, champion in 2018, has been the favourite for the French Open the past four years though retired up a set against Angelique Kerber in Rome. The Romanian suffered a left calf tear, and it is incredibly unlikely she will be fit enough for Paris.

13 points is the fewest points lost in a completed WTA final at the Premier 5, Premier Mandatory, WTA 1000 level.

Meanwhile, there are also injury doubts circling over 2019 champion and world No 1 Barty. The Australian was also a set up when she retired in the last eight against Gauff with an elbow injury.

Barty’s retirement was likely more of a precaution and she is expected to be fit and healthy for Paris, though there are certainly a few doubts hanging over her now.

There are of course other strong contenders. 2016 champion Muguruza is in good form this year, whilst it seems unwise to rule out Svitolina despite past struggles at majors. It is also unwise to discount Serena Williams, though she has struggled so far on clay this year.

However, as the defending champion in good form and with no injury concerns, Swiatek looks a good bet ahead of the second Grand Slam of the year.

Defending a Grand Slam title is tough and it may not be too surprising if she does struggle with pressure, but it would not be a surprise to see her lift the Coupe Suzanne Lenglen again.