In conversation with youngster Khololwam Montsi: The ‘free kid’ who likes to entertain 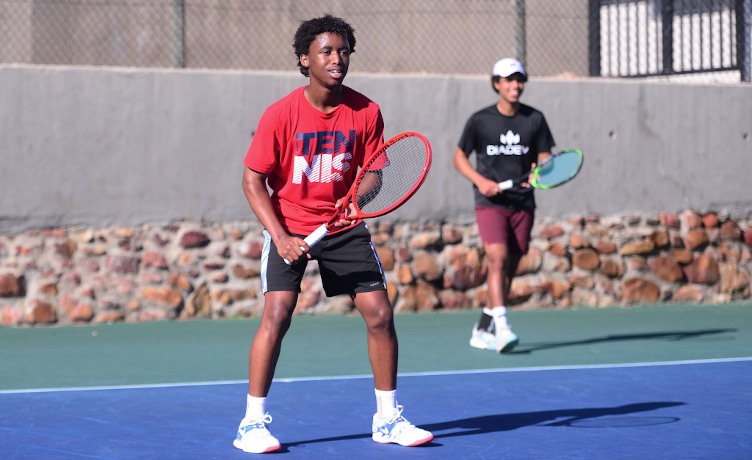 From the moment Khololwam Montsi starts talking about his life and tennis journey, albeit a short one so far, his incredibly strong sense of family and mental strength immediately strikes you.

Kholo – as he is fondly known as – is only 17 years old, but he is already making waves, not only in his native South Africa, but around the tennis world.

The teenager is currently based at the Connect Sports Academy’s High Performance Centre in Cape Town while he is also part of the Anthony Harris Tennis Academy.

@kholo_montsi is in the final stages of his build up to the #FrenchOpen @rolandgarros. ? ? We’ve been busy working with the world number 13 on his #athletic and #mental #development ahead of his final junior #GrandSlam before hitting the @itf_tennis men’s tour. ?? ? ? #tennis #conditioning #highperformance #CapeTown #SouthAfrica

When he starts talking about the decision to base himself in Cape Town, the usage of the word “we” is noticeable from the get go.

“We were born in the Eastern Cape. We moved down to Pretoria in about 2012 as we had a scholarship to go study at a school called Curro Hazeldean,” he begins.

Asked to clarify “we”, he explains that the other half of the “we” refers to his brother Siphosothando before adding: “I like to say we because we are a team, there is no “I” in my family so I like to refer to we.

“After a few months we started training with a German coach called Larsen Stehr. A very, very good guy and a very good coach,” he adds. “He helped us a lot. Not just in tennis, but in life in general, teaching things from science to finances. That’s what I liked about him as he taught us a lot of about life and how many things work in life, what’s good, what’s bad, media, TV, shoes, brands, anything you can think of.

“Unfortunately, after a year or so we had to move from him after we were offered financial support from MiX Telematics to go train at the John-Laffnie [de Jager] Tennis Academy in Pretoria.

“I was very happy there, we worked well together, but I always wanted to stay in Cape Town. I think the first time I came to the Anthony Harris Tennis Academy, I see Sea Point and Clifton, and I was like ‘I wanna live here’. We decided to make the move only in 2017.”

Asked if he would consider moving to one of the more well-known tennis academies like the Rafael Nadal Academy in Mallorca, Spain, or the Mouratoglou Tennis Academy in Nice, France, he made it clear that his home is in Cape Town.

“I am happy where I am. Obviously those are very good academies as you have everything you could possibly wish for, but I am super happy here,” he said.

“I think the one place that I really need at this stage of my career is the Burgundy High Performance Centre. Even the Anthony Harris Tennis Academy, we work well with Anthony, we understand each other, we gel well.

And soon we are back talking about the other half of the “we”.

While most young athletes often proclaim they took up a sport because they were inspired by a professional athlete they saw on television or read about, for Kholo his love for the game started much closer to home.

In fact, it started at home when he was just seven and all he wanted to do was emulate Sipho, who is two years older than him.

“My brother played, he played pretty much every sport from soccer to rugby and cricket at school,” he says. “As the younger brother, I looked up to my older brother and I wanted to copy him, did the same sports and everything. I think the only thing I did different was squash and karate.

“Once my brother played tennis all of a sudden I was like ‘oh well I want to play tennis’. He started travelling with the South African side. He travelled a lot and I told myself ‘well I want to travel’ so I pretty much dropped karate. I wanted to be like him and picked up the sport at seven.

“He started playing at Border because they needed a black player and his friend’s mother recommended him because he played different sports.

“I hear many people say I watch [Rafael] Nadal and watched [Roger] Federer, but I am often the only person that started playing the sport not because of an actual tennis player.

“That’s how he started and I followed in his footsteps and just wanted to do better.”

AJC 2020! Maaan, this was the best way to end my last AJC ever! Glad I can say I was the champ🏆💪🏾Thanks to everyone that was there to share this moment❤️🙏🏾🏆 #AJC2020CHAMP#Wami#magicalmontsi

Ten years later and Kholo has definitely followed in his brother’s footsteps and he is already well on his way to keeping the Montsi family flag flying on the international scene.

Nadal may not have been the player who inspired him to take up the sport, but the Spaniard’s mental strength and fighting spirit are reasons why he has become his idol.

“My idol is Nadal, but my favourite player is Nick Kyrgios,” Montsi says. “I like to look at a lot of the top guys and try and combine all of their strengths. Look at [Novak] Djokovic’s backhands for example, Federer’s forehands.

“I wouldn’t imitate the exact same style, but just take note of the way they do it and then I try to take Nadal’s fighting spirit, [Gael] Monfils’ flair or Kyrgios’ flair and I try to combine everything together.”

And when combine the strengths of Nadal, Kyrgios, Djokovic, Federer and Monfils you get a “free kid”.

“I am a free kid as I like to go with the moment, the flow. I love playing in front of people,” he continues. “I can bring my own energy, but I love that feeling of the crowd. I watch a lot of Monfils, Kyrgios, the entertaining players so I think that’s where it started to come from.

“I love to pump myself up, play with the crowd and just give it my all. I also love to entertain people on the side.

“I’m very fast on the court. My height is actually not a problem, I am 5 ft 6 in and obviously I would love to be a bit taller for the serving, but I am very comfortable. I have made it this far and I believe I can go further. I think that’s where the mental strength comes in because I know I am not the strongest physically and I know I am not the tallest so I use what I have to my best abilities.

“I am an all-rounder, I love drop shots, through the legs shots (tweeners).”

In the second part of our interview, Montsi discusses his 2020 Australian Open adventure, “getting fixed up”, his French Open dreams and his relationship with Ivorian Eliakim Coulibaly.