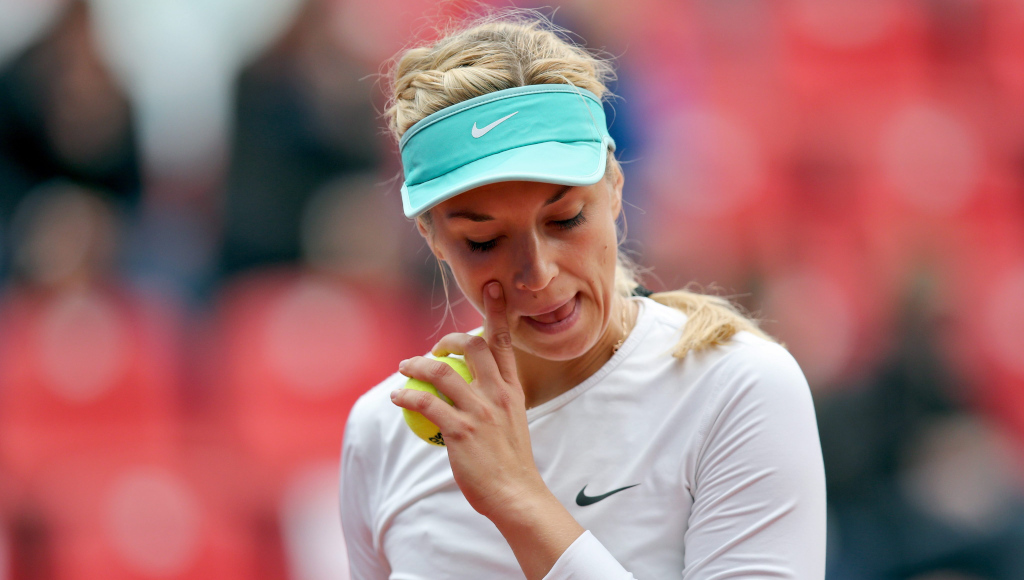 “It’s nice to believe that it will turn around one day but it takes so much energy,” a tearful Sabine Lisicki said in October 2018 on the back of yet another comeback.

Even though she had lost in the second round of the WTA 125K series Mumbai Open, for Lisicki the joy of being out on the court and having turned yet another corner was more important.

She continued: “This year has been so tough. Losing these close matches is hard to take. When you work your butt off every single day and lose so close, it’s heartbreaking because you put in so much work and you want to win so badly.”

A few weeks later and she reached her first final in four years as she finished runner-up at the Taipai Challenger.

Sadly for Lisicki, her latest comeback lasted just over two years as she suffered another career-threatening injury at the Upper Austria Ladies Linz.

Competing in the doubles alongside British playing partner Jodie Burrage, the German fell awkwardly and injured her knee. After doing an MRI scan, her worst fears were confirmed as she tore her anterior cruciate ligament.

Only forward from this moment on!

I had a MRI scan the same evening & unfortunately I had a torn ACL. I already had surgery & got all fixed up by the best doctors. It’s going to be a very tough & long road back but I’m luckily surrounded by the best medical team!
1/2 pic.twitter.com/daZLhYc5ML

“It’s going to be a very tough & long road back but I’m luckily surrounded by the best medical team!” she wrote on social media after undergoing surgery.

This “tough and long road” has been an all too familiar one for Lisicki.

Even before she reached her zenith at Wimbledon in 2013 when she finished runner-up in the Ladies’ final to Marion Bartoli, she had already had several tastes of heartbreak.

Her nightmare started at the 2009 US Open when she injured her left ankle, but she was soon back in action only for disaster to strike again at the 2010 Indian Wells Masters with another ankle injury.

This time she spent five months on the sidelines and a few years later and she admitted that she had to learn how to walk again and was advised to retire, but her self-belief helped her to overcome the dark days.

“I always believed. Always. No matter what happened. I can still remember when the doctor told me that I have to be on crutches the next six weeks. That period made me such a much stronger person and player,” she said.

“I know anything is possible after learning how to walk again. I love the sport so much and I miss it when I cannot be out there on the court. It just gives me the belief to overcome anything.”

“In 2010, I was on crutches for 6 weeks due to an ankle injury. It was difficult to leave my apartment and I had to learn to walk again. We take a lot for granted. It was a very tough road back to the court. Many people said I would not return to the circuit but I never thought about giving up. In 2011, I was ranked outside the Top 200 and four months later, I was ranked inside the Top 30. I won the Aegon Classic in Birmingham and reached the semifinals of Wimbledon. Two years later, I played in the Wimbledon final. ⁣ ⁣ The last few years have been difficult. In 2018, I was starting to play well again and reached the finals of the Taipei OEC Open. The next year, I started feeling weak and did not know why. It took more than six months for doctors to figure out that I had mononucleosis. I had no energy to go to the grocery store. When I got cleared, I had to start from scratch. After fifteen minutes of exercising, I was exhausted. Over time, I slowly regained physical strength and was about to return to the tour when the pandemic hit.⁣ ⁣ My parents never gave up on me and I’m incredibly thankful for their support and sacrifices. I’m very grateful that I got the opportunity to become a professional tennis player. Tennis is my life. When I was injured or sick I didn’t watch much live tennis because it was painful. Instead, I analyzed past matches because I love the tactical aspects of the game. My father has a PhD in sport science and I grew up analyzing the sport. I understand the game in a different way. I hope to be involved in tennis after my time on tour but for now, my goal is to improve as a tennis player and as a person. When the pandemic hit, I thought about how I could give back to the community. I started a YouTube channel to motivate people to stay active. I hope they can enjoy my workout videos during this difficult time.⁣ ⁣ Nothing in life is given to you, it’s earned. Whether you are on the court as a professional athlete or in a business office, you have to work hard for your accomplishments. My love for the game has allowed me to stay positive. Playing in front of a full stadium is the most incredible feeling in the world.” #BTR⁣ @sabinelisicki

Overcome she did as her she had a reasonably injury free campaign in 2011 and her tale seemed to have a happy ending as she managed to play in 15 tournaments, winning the Birmingham Classic in June and the Texas Tennis Open in October.

On top of that she reached the Wimbledon semi-final as a wildcard, losing to eventual champion Maria Sharapova, and finished the year at No 15, which earned her the WTA Comeback Player of the Year award.

Although she didn’t win any titles in 2012, it was even better than 2011 in terms of tournaments played as she managed 19 events despite spending a month on the sidelines after a fall. She also reached the quarter-final at Wimbledon.

And then there was 2013, a year that didn’t yield any titles, but it was a glorious one nonetheless as she reached her maiden Grand Slam final, finishing runner-up to Marion Bartoli at SW19 having stunned defending champion Serena Williams in the fourth round.

Her form started to dip in 2014, but she still managed one singles title – the Hong Kong Open – and one doubles title alongside Martina Hingis at the Miami Masters.

But by the end of 2015 her injury woes started to return and she would end the year early due to a knee problem while the following year she struggled to string a good run of form together, winning only 15 of her 36 WTA Tour matches.

That fact that she managed to play 21 tournaments in 2016 was a victory in itself as her tally for the next three seasons were 10, 9, 4.

A shoulder injury kept her out during the early parts of 2017 and she won only five matches. In November that year she underwent knee surgery.

But the flame to return to competitive tennis continued to burn strongly and by the end of January 2018 she was back on the WTA Tour, ranked a lowly 246 she reached the quarter-final of the Taiwan Open. She would win only two more Tour-level matches that year as a shoulder injury continued to trouble her.

The constant setbacks had started to take its toll mentally, physically and financially and she admitted at the 2018 Mumbai Open that it was a constant struggle.

“You’d think that since I haven’t played a lot of this year, I should have the energy to participate in more tournaments. But rehab takes more energy out of you than tournaments do,” she said.

“It’s hard to find a few Challengers in the same area which would help in reducing the travel time and give your body time to relax. Travelling around takes a toll financially. You don’t have sponsors and you need to get into the top 100 just to break even.”

Yet at the start of 2019 she was back playing competitive tennis, mostly trying to earn places in WTA Tour main draw events through qualifying, but the results were not coming. 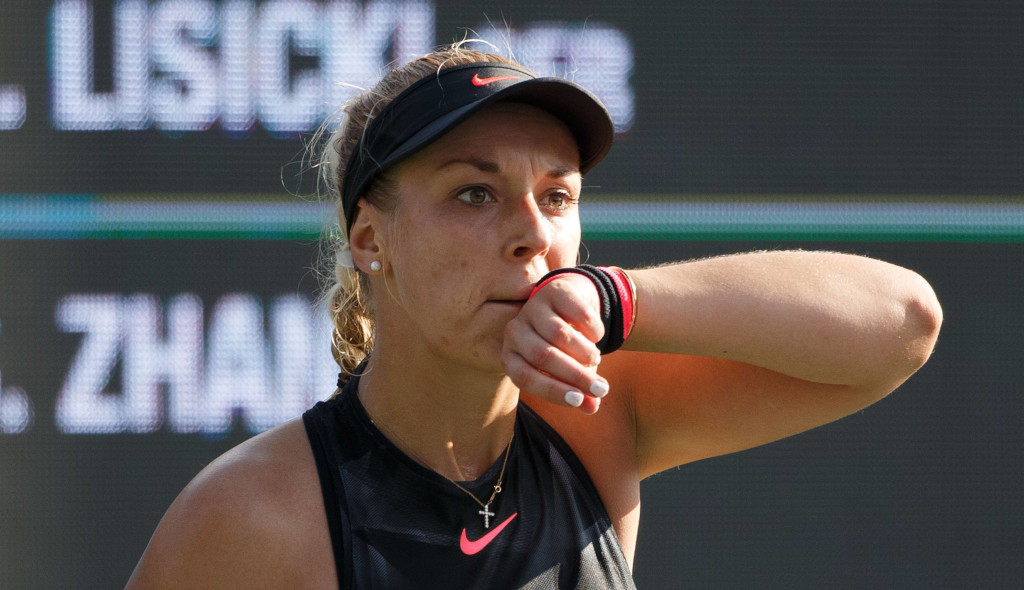 Between January and June, she suffered nine consecutive defeats – mostly in qualifying – and despite playing several matches, her fitness also didn’t pick up.

By September she finally went to see a doctor and was diagnosed with mononucleosis, a disease with symptoms of fatigue, fever, rash and swollen glands.

“At the beginning [when I started to feel symptoms], I thought maybe I’m not fit enough yet, because if you feel weak in a match that’s the first thing you’re thinking,” she told WTA Insider at the time. “I’m not the person who says oh, I’m sick, let’s take the time off. I think ok, what can I do better.”

But her fighting spirit was also summed up during the interview.

“I still feel the fire and desire to play and compete. That’s the way I approach it. As long as I feel that, that gives you the patience that you need.

“But I definitely can’t wait to be back on the court again.”

And come back she did as she made her first appearance of 2020 at the WTA 125K series Prague Open in August.

Having dropped to No 681 in the WTA Rankings, Lisicki used her protected ranking to enter and it was a successful return as she won three matches before going down in the fourth round.

There were plenty of positive signs as she made her 2020 WTA Tour debut in Linz and won her first qualifying match before losing in round two.

But then disaster struck as she suffered another cruel break in the doubles as she fell and injured her knee, ruling her out for another extended period.

It would be easy to just all pack it in after the latest setback, but Lisicki has done it all before and don’t be surprised to see her back on the WTA Tour in 2021.