Life is a cabaret: Top 10 Nick Kyrgios matches in his career so far 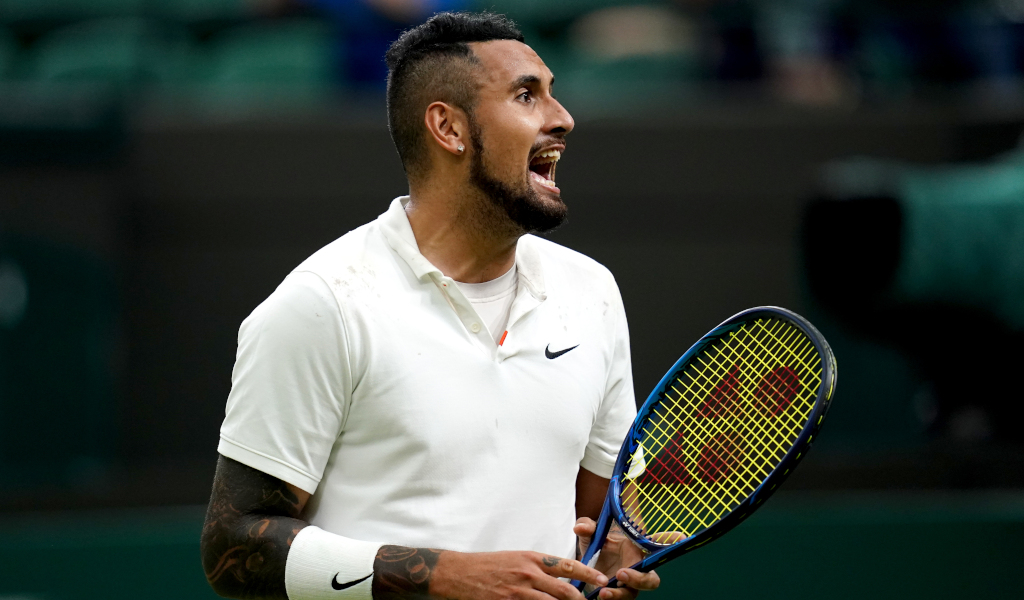 Nick Kyrgios wants to “put on a show” for the fans when he returns at the ATP tour event in Melbourne. After all, he’s pretty good at serving up more than just tennis balls…..

Kyrgios played some lovely – and mainly rant-free- stuff at this year’s Wimbledon before being forced to retire with an abdominal injury in the third round against Felix Auger-Aliassime. His first match saw a repeat clash with Ugo Humbert who also took him to five sets at Melbourne.

Kyrgios cranked it up as natural light faded, but not before questioning the pace of the grass in his inimitable style.

Just before 11pm, the two were hauled off the court at two sets all and 3-3 after a grand evening’s entertainment.

“I feel like when they (fans) come to my matches now, they know how I am,” Kyrgios said.

“I’m quite light-hearted. Yeah, they know it’s a bit of a show. They just want entertainment.”

They lapped it up. He came back the next day to finish it all off. Encore.

The 2014 meeting between the cocky wildcard teenager and world number one gave was a fabulous fourth-round match.

Although Kyrgios was already expressing a dislike for the game, he played a brutally efficient hand consisting of 70 winners, 37 aces and a serve to die for.

“I think I was in a bit of a zone out there,” he said immediately after victory.

“I didn’t really notice the crowd out there. I played some extraordinary tennis.”

3) This stage is big enough for the both of us:

Kyrgios promised his 2016 SW19 match with Dustin “Dreddy” Brown would be “a circus” and it certainly proved to be. The dreadlocked Brown had defeated Rafa Nadal the previous year as a qualifier with a game well suited to grass.

The audience was treated to a speed dial five sets of just over two hours with Kyrgios up to his usual tricks of quick hands and fruity language set against the German’s flamboyant drop-shots and Boris Becker-style volleys.

The kindred creative spirits produced a corker that went the Aussie’s way.

It’s hugs all round at the net as Nick Kyrgios beats close friend Dustin Brown in a five-set epic#Wimbledon https://t.co/cP0D9p56Lu

This third-round five-setter took place before an adoring home crowd that pumped Kyrgios into a two-set lead. Hey, they wanted some good news before entering into a five-day lockdown.

Unfortunately, Thiem started to fight back just as he had to claim the US Open against Alexander Zverev. Kyrgios entered the unfocused zone with two shots between his legs dumped into the net when serving for a critical lead. He even managed a row about grunting.

Despite defeat, NK remained Mr Spock logical after the match: “I took 13 months away from the game and to produce that level and go toe to toe with one of the best players in the world, I’m pretty proud. I left it all out there.”

This Wimbledon sequel packed a punch that went far beyond the court. Kyrgios was irritated at Nadal’s pace of play and served underarm twice. He also called the umpire “a disgrace.” All in a day’s work.

The Australian eventually succumbed in four and admitted: “I’m a great tennis player, but I don’t do the other stuff. I’m not the most professional guy. I won’t train day in, day out. I won’t show up every day.”

He also scoffed at the suggestion he should apologise for a baseline forehand directed at the Spaniard: “I won the point. I mean, the dude has got how many slams, how much money in the bank? I think he can take a ball to the chest, bro.”

The normal blowout was (almost) justified when the Australian railed against a time violation for not giving his bloodied towel to a ball boy for hygiene reasons.

Are you not entertained?! 🍿

“Are you stupid? Can you not see?” Kyrgios screamed at the umpire. “Do your job.”

When Khachanov smashed a backhand wide, Kyrgios dropped to the court in a state of sheer relief. “I don’t even know what to say right now. It was insane.”

Kyrgios has a 100 per cent record against the world number one. Sounds impressive, albeit they have only played each other twice.

Both victories came in the space of a golden fortnight in March 2017. Kyrgios piled on 25 aces in his first ever meeting with the Serb at the Mexican Open. Twelve days later, the Australian smacked 25 winners past Djokovic, the then world number two at Indian Wells.

The difference four years ago is that Kyrgios was much more respectful of his opponent, citing “he is a great champion.” Nowadays, he sees the 20-time champion as a “tool” and “a strange cat”.

He’s lost the last six matches against the Swiss master, but in their first clash in the 2015 Madrid Open, the 20-year-old saved two match points to take the victory in three titanic tiebreaks 6-7, 7-6, 7-6 against his childhood hero.

#OTD in 2015: @NickKyrgios defeats Federer in their first ever meeting 😮

Even Roger was impressed: ““He likes the big stage and he’s got nothing to lose, no fear and he’s got a great game,” Federer said.

“He can rely on his serve so much that it keeps him in the match regardless of how he plays from the baseline.”

9) Falls just short against Fed in another tiebreak tussle:

Two years on from their three sets of tiebreaks in Madrid, Kyrgios and Federer were at it again in a high-quality match in Miami.

The ATP site described it thus: “In a fascinating showcase of attacking tennis, Federer and Kyrgios produced the 2017 ATP Match of the Year.”

The Swiss ultimately claimed his place in the final with a 7-6(9), 6-7(9), 7-6(5) triumph after three hours and 11 minutes. The Canberra native did manager a cheeky between the legs winner.

Sometimes, the histrionics are an unnecessary extra.

10) The greatest showman in Washington:

Kyrgios was the ultimate showman in his semi-final defeat of Stefanos Tsitsipas at the Citi Open in 2019.

He boomed 19 aces, saved a match point and eventually prevailed 6-4, 3-6, 7-6 (7). There was also a bit of comedy gold as the Aussie brought a tennis shoe on bended knee, Cinderella-style to his opponent via Tsitsipas’s father.

To wrap it all up, Kyrgios consulted with a random fan in the crowd on where to serve at match point. He must have received good advice…

Who needs a coach with tennis-savvy fans like this? 😂