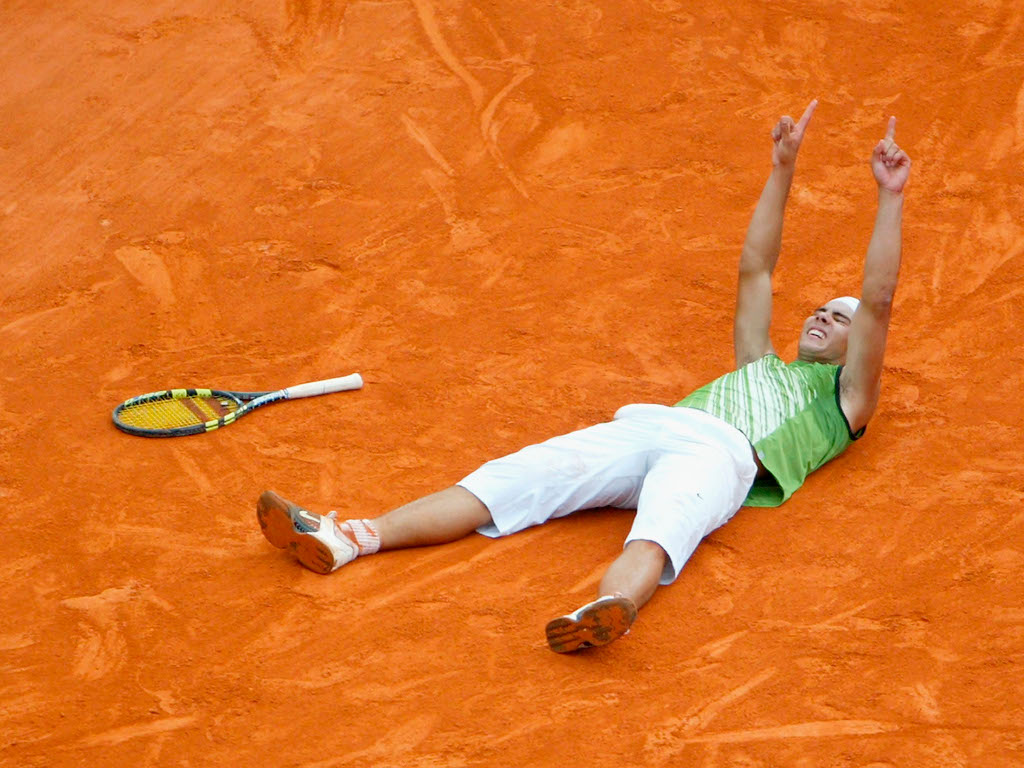 The clay-court season gets underway this week and what better way to celebrate than by looking back at Rafael Nadal’s incredible 81-match winning run on the surface.

His extraordinary spell started on April 11, 2005 at the Monte Carlo Masters and came to an end on May 14, 2007 when he lost in the Hamburg Masters final against his Roger Federer.

Having made his breakthrough in 2004 when he won his maiden title in Poland in August, Nadal firmly laid down the marker of what’s to come during the 2005 season.

Unsurprisingly, his success was built on his formidable clay record.

Having been beaten by Igor Andreev in the quarter-final of the Valencia Open, the Spaniard started his incredible run when he opened his Monte Carlo Masters campaign with victory over Gael Monfils.

The New York Times said it was the day “Nadal came of age on clay”.

A week later he was collecting another trophy and the papers were again singing his praises as he beat compatriot Juan Carlos Ferrero in the Barcelona Open final.

Next up was the final warm-up event for Roland Garros, the Rome Masters, and he made it three clay-court titles in less than a month as again he beat Coria in the final, but this time he needed five sets to see off the Argentine.

And so he arrived at his maiden French Open on the back of 17-match winning streak on the red dirt.

Nadal breezed through the opening week like an old pro and he came up against Federer in the semi-finals, but the top seed and world No 1 was dispatched 6-3, 4-6, 6-4, 6-3 as the young gun set up a final encounter with Mariano Puerta.

The unseeded Puerta gave the teenager something to think about as he won the first set, but it was all Nadal after that as the Spaniard won his maiden Grand Slam in Paris at the first time of asking.

Of course he finished his clay campaign with titles in Bastad and Stuttgart while he also won two Davis Cup matches for Spain on the surface.

This time he went through the clay season undefeated as he successfully defended his Monte Carlo Masters, Barcelona Open, Rome Masters and French Open titles while he again won two Davis Cup ties.

By 2006 the Nadal-Federer rivalry was in full swing and the Spaniard was definitely getting under the Swiss player’s skin as he beat him in the Monte Carlo, Rome and Roland-Garros finals. His win at the French Open was his 60th consecutive on clay and it also stopped Federer from holding all four Grand Slam titles at the same time.

History repeated itself in 2007 as Nadal would also again win the Monte Carlo Masters and yes, Federer was once again the man he defeated in the final, while he also had more success in Barcelona and Rome.

This time, though, he added the Hamburg Masters to his schedule again and, unsurprisingly, he made it to the final where he would meet his old foe Federer.

“His streak was phenomenal – 81 matches in a row on clay is fantastic,” Federer said of his opponent. “I have a lot of respect for him.”

Nadal was gracious in defeat saying: “If I have to lose against anyone, then he is the man. I am not sad to lose to the best in the world.”

He added: “Now I have to start another [streak].”