T365 Recall: The brilliant yet fleeting rivalry of Venus Williams and Martina Hingis 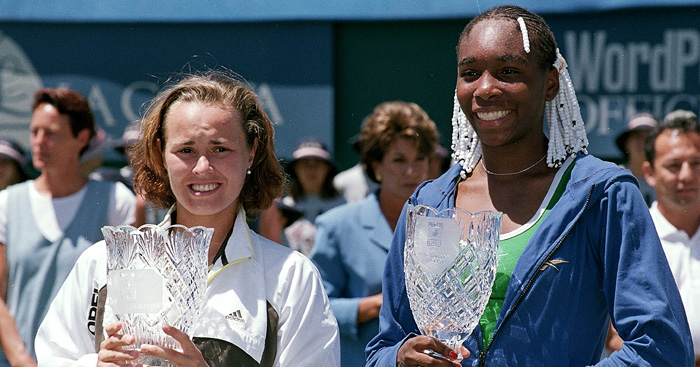 Peter Hampshire recalls one of the great tennis rivalries of the ages, but one that also could have been so much more.

21 years ago two future heavyweights of women’s tennis met for the first time in the third round of the Miami Open.

Martina Hingis, incredibly ranked at number two at just 16 took on 110th ranked Venus Williams, three months her senior, in Key Biscayne, Florida. The Crandon Park audience presumably didn’t know they were watching history in the making as the pair went on to contend 21 times in one of the greatest rivalries in sporting history.

Hingis won the inaugural battle 6-4, 6-2 with Williams power clear to see even at an early age. Often described as a petulant raw talent, the pair met later that year on the biggest of stages.

“She’s an all-round player, and she seems to enjoy it, so I don’t see a burn-out factor there. The atmosphere around her is very conducive to playing for a long period of time. So I think she’s very special.” – Chris Evert – 1997.

Two spectacular careers later and Hingis just edges out Williams in head to head comparison (11-10) but that only scratches the surface of an all too short but intriguing nine-year battle.

With Hingis winning all three of their first meets including a sensational landmark 1hr 2min victory in the 1997 US Open final, the pair became embroiled in a compelling battle for supremacy with Williams first victory a three-set endurance test at the Sydney International. 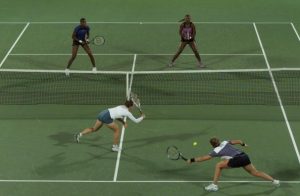 The pair couldn’t be separated in doubles matches, with the Williams sisters testing their combined mettle against three Hingis partnerships over a three-year spell that ended 2-2.

A rivalry that petered out in the early noughties, especially following Hingis’ first retirement, was reignited in 2006. After a mammoth 2hr 34 min victory for Williams at the now defunct J&S Cup in Poland, the final showdown at the Italian Open was a 0-6, 6-3, 6-3 semi-final victory for the Swiss on her way to the title.

Receiving accolades from the age of 12 as she scooped the junior French Open, Hingis’ hat-trick of Grand Slam titles in ’97 gave no room for talk of potential.

Both turning professional in October 1994 in a rush to meander their way round impending rule changes, but Williams didn’t burst out of the blocks in the same vein as Hingis, who took the limelight showing incredible composure for her age with an unrivalled anticipation and accuracy.

Known for her off-the-court fortitude and brashness, Hingis retired at 22 citing foot troubles following 209 weeks as world number one.

In contrast, Venus has spent just 11 weeks at the summit. Losing six of eight contests against an ever-improving Williams was perhaps another contributing factor in retirement, losing to someone she used to have a hold over in a constantly developing sport.

One of the greatest disappointments to come from the rivalry was the lack of any Grand Slam finals following that landmark day in ’97, with the main contributing factor being Hingis’ decision to quit. It’s noteworthy, perhaps, that Williams only beats Hingis on aggregate on grass in the history books.

“It’s amazing Maybe nobody would have picked right from the start that Venus would be there in the finals.” – Hingis on Williams at Wembley, 2017.

There are further similarities between the two. While Williams will forever be forged in our memories alongside her sibling Serena, it was Hingis’ Mother that pushed her to the top. The pair were also not unbeatable and were vulnerable to the same troubles, as Jana Novotna proved by grabbing revenge at Wimbledon ’98.

While Hingis has five Grand Slam singles titles to her name in a disrupted career full of intrigue and delight, Williams’ consistency and persistence to strive for greatness arguably gives her the edge.

Both, however, remain commended as two of the finest players ever to grace the court.