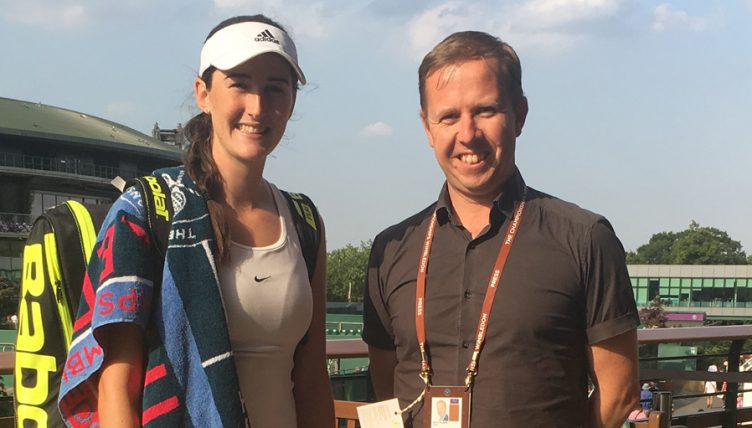 It takes real courage for a young teenager to walk away from her family, friends and home comforts in a bid to make it big as a top tennis player.

That was the path Maria Sharapova took as she left Russia and made the leap into the WTA Tour ranks to great effect and now 18-year-old Irish talent Georgia Drummy is following in those famous footsteps by moving to Florida in a bid to seek top level practice partners and take her game to the next level.

When Tennis365 caught up with Drummy last month, she could have been forgiven for believing she had already hit the big-time, as she shared Wimbledon’s All England Club dressing rooms with some of the biggest names in the game as she enjoyed a fine run to the quarter-finals of the Girls’ Doubles event with her American partner Alexa Noel.

Yet this mature and confidently spoken left hander accepts she has to overcome plenty of hurdles before she earns the right to return to the All England Club as a fully fledged professional.

“It’s surreal being here at Wimbledon,” began Drummy. “We see this place on TV when we are growing up, so to play here is pretty amazing. This was also the first time I played grass court tournaments so it was a different experience and I enjoyed it.

“This tournament is great for the junior players. We share the Wimbledon dressing rooms with the pros and being around them is an amazing experience. It’s so inspiring to be around them and when you see these top players having practice sessions and doing what they do, it makes me want to work on my game.

“My hero growing upon was Rafa Nadal and one of the highlights of my time at Wimbledon was getting a photo with him. I was so happy with that. It’s all I wanted! We were out on the practice courts with the top players and it was fantastic to see them giving us a chance to take photos with them.”

Drummy was a beaten finalist in a high profile junior event in California back in April and feels she can bridge the gap between her own developing game and the best players emerging through the ranks of the women’s game after making the move to America.

Tennis Tales: The curious case of Thomas Muster and his @Wimbledon disdain.https://t.co/ytLVrUBGZY pic.twitter.com/hdWnLzabvX

“It’s a big commitment to leave home and try to improve my game in the States, but it has definitely helped me a lot,” she continues.

“One of the issues in Ireland is getting top level players to compete against and I’m certainly getting that in America. Andy Murray has that issue in Scotland when he was growing up and decided to move away to play against better players and it definitely helps.

“The standard in the States is fantastic. I was playing the same players in Ireland all the time and it wasn’t really helping me to improve my game, but that has all changed since I made the move and the competition I get now is great for me.

“My parents were happy for me to make this move to America. They knew it was the right decision for my game and even if they might have been sad to say goodbye to me, they supported me all the way.

“Training in the heat and humidity has been great. The weather in Florida is hot and we are not used to that in Ireland. I hated it when I first went out there, but I am getting used to it now and those are the kind of conditions we play in on the main tour, so it is great preparation for that.

“Now the next step is massive. Moving out of the juniors and making a successful career in the professional ranks is a tough challenge, but mMy hope and dream is to get back to Wimbledon and play on Centre Court at some stage. If it takes me five years to get there then so be it, but that has to be the aim for any player.

“I certainly feel like I’m close to the top girls in the junior game. My next big event will be the US Open, before I get back to training in Florida and see where I am in a few months or a year from now. Hopefully I make the improvements I need to my game to take it to the next level.”

Drummy is planning to go to college in America later this year and may turn professional at some point while her studies are ongoing, with the task she faces to become the first big star of Irish tennis among the most challenging in all sports.