Top 10 tracks of their tears: When tennis stars broke down, featuring Andy Murray’s waterworks and more

The Australian Open has been the scene of Roger Federer’s most famous tears of failure and success over the last decade. What can we expect in a couple of weeks? Here are 10 moments when emotions got the better of tennis stars.

10. Mattek-Sands comes to terms with twist of misfortune
Bethanie Mattek-Sands and her doubles partner Lucie Safarova had arrived at Wimbledon in 2017, bidding for a non-calendar-year Grand Slam, having won the previous three major tournaments in a row.

Mattek-Sands was also playing singles and in a literal twist of fate, the American collapsed to the grass when her right knee dislocated against Sorana Cristea of Romania in the second round. 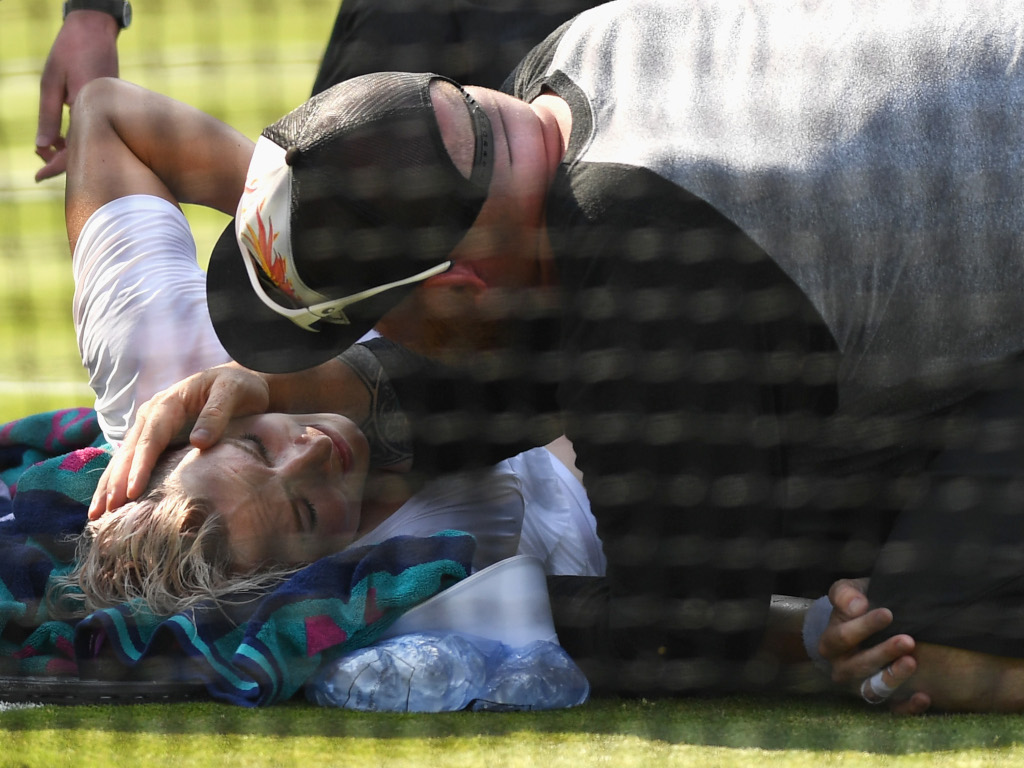 Cirstea said: “I tried to comfort her, but I panicked. I felt useless. All she kept saying was ‘Sorana, help me, help me.”

Sarafova ran to the court and was moved to tears to see her stricken partner on the floor in distress.

Thankfully, Mattek-Sands returned to action eight months after surgery. She also returned to Wimbledon in 2018 to make peace with Court 17 after the horror of the previous summer.

9. Martin blasted by Roger after blister makes him blub
Tennis plays with your mind as much as any sport. And if the body packs in, there is nowhere to go against the world’s best. That’s what Marin Cilic felt after coming across Roger Federer on his “home court” at Wimbledon in the men’s final of 2017.

The Croatian was a set and two games down when, at the changeover, Cilic pushed a towel in his face and began to realise the enormity of his situation.

“I had a really bad blister, which I felt in my match against (semi-finalist) Querrey.?Fluid came down under my foot. I felt pain and I was?unable to do fast reaction. It was tough emotionally,” he said.

8. Roger’s tears of relief after Slam count reaches 20
Nine years after his tears in 2009 at the hands of Rafa, Federer was inconsolable again, but this time it was in victory. The Swiss had claimed his 20th major, his third in a whirlwind 12 months, after a barren run of five years without a Slam.

After fighting off Marin Cilic in five sets, the 36 (and a half) year-old admitted to a huge sense of relief, alluding to the fact that he was expected to prevail in the same way he had over Marco Baghdatis back in 2006.

The Fed Express admitted: “I couldn’t see [Rod Laver taking a picture] because I was crying too much. I couldn’t see through the tears. I didn’t lift my head. I was too embarrassed!”

7. Osaka upset as Serena turns air blue
Naomi Osaka’s humbling of Serena Williams in September’s US Open final was severely and savagely overshadowed by the behaviour of her opponent.

Williams had been in a running battle with umpire Carlos Ramos all match and had ultimately received a game penalty after she was accused of receiving in-game coaching, had smashed a racket and launched a thunderous tirade against the official.

The Japanese stood on the podium, awaiting the trophy, amid a chorus of boos, but gallantly said: “I know everyone was cheering for her and I’m sorry it had to end like this.” Only then did Serena feel guilty enough to proffer: “I don’t want to be rude.” Bit late for that…

6. Novak gets emotional after rousing Roland Garros ovation
2015 appeared to be the year that Novak Djokovic would finally break his Roland Garros duck. Like Federer in 2009, it all seemed to be stacking up for him as he defeated the King of Clay Rafael Nadal in the semis, to meet erratic Stan Wawrinka in the final.

After winning the first set, the Serb was on his way, but the Swiss with the interesting shorts then started to pummel his opponent with power and took the match in four. A devastated Djokovic was humbled by a 90-second standing ovation by the Roland Garros crowd. Unsurprisingly, he couldn’t keep it all in…

5. Jana triumphs after tears
The late Jana Novotna, who died tragically at the age of 49 just 13 months ago, was forever remembered for the triumph and despair that Wimbledon is famous for. The Czech was on the verge of a commanding victory over Steffi Graf in the final of 1993 when at 4-1 with two breaks in the third set, she crumpled quite spectacularly and lost.

Not even the Duchess of Kent’s comforting shoulder could calm the private hell of such a public collapse. The Independent likened it to “like a house without foundations in a gale”.

Four years later, Novotna lost again to Swiss Miss Martina Hingis but the following year, her SW19 agony was over as she claimed the title when defeating Nathalie Tauziat. The smile was majestic.

4. Murray’s waterworks on tap
Cleary Andy Murray is an emotional chap. Having entered hearts after losing to Roger Federer in the Wimbledon final of 2012, his keen sense of deadpan humour was on show to try and kill the pain of a fourth straight Grand Slam final loss: “I can cry like Roger. I wish I could play like him.”

When the Scot battled to the quarter-finals of this year’s ATP Washington event in August at 3am in the morning, he was sobbing uncontrollably in the chair. As he desperately strives to make it back to the top tier after hip surgery 12 months ago, Murray was trying to stop the tears roll again this week after beating James Duckworth in Brisbane: “I don’t know how much longer it’s going to last,” Sir Andy said as he fought his emotions once more.

3. Fed is ‘killed’ by relentless Rafa
After losing his SW19 crown to Rafa in the English summer in 2008, Roger Federer met the Spaniard again on the hard courts at the Australian Open final. Rafa’s epic five-hour semi-final against compatriot Fernando Verdasco had entered Saturday morning while the Swiss had blitzed his way through his without dropping a set.

However, Federer just could not shake his nemesis on the last Sunday, especially during an epic third-set tiebreak. Although Federer won the fourth, he visibly wilted in the final set and took this state of turmoil into his post-match speech which consisted of the epic words: “God, this is killing me” before breaking down. Rafa, in genuinely comforting mode, returned: “Sorry for today, Roger.”

2. Konta’s crying game as Nastase gets nasty
In the 2017 Fed Cup World Group play-off tie between Johanna Konta and Sorana Cirstea, Romanian captain Ilie Nastase was “sent off” after consistently abusing fellow skipper Anne Keothavong and Konta, as well as the umpire for bad measure.

Konta was visibly upset and play was suspended for 25 minutes to cool things off. She returned to win the match but her opponent showed no sympathy. “Why did we stop? Only because Johanna cried?”, Cirstea claimed. “I have never cried on the court because someone told me something. You have to toughen up.”

Nastase was banned until 2021 (reduced on appeal to 2020) for “racially insensitive comments” about Serena Williams’ unborn child and “sexual harassment”. He had asked for Keothavong’s room number earlier in the week, after crassly putting his arm around the GB captain. Room service was declined.

1. Ice-man Sampras cracks after coach diagnosis
The 1995 Australian quarter-final between Jim Courier and Pete Sampras was an emotional affair.

Prior to the match, the normally poker-faced Sampras found out that Tim Gullikson, his coach and friend, had terminal brain cancer
Courier went two sets up but the world number one hit back and led for the first time in the fifth and final set when, at the change of ends, the enormity of it all suddenly caught up with Pistol Pete: “As I sat in my chair on the change of ends, I started thinking about Tim; I had a flashback to the hospital, and how vulnerable and sad Tim had looked. Moments later, I fell apart.”

Courier famously offered empathy: “Are you okay, Pete? If you want, we can come back and do this tomorrow.”

That snapped Sampras out of his wretched state and he went on to claim the match, eventually losing the final to Andre Agassi. Gullikson died the following year.