Nick Kyrgios to Rafael Nadal: ‘Let’s do Instagram Live together. I am down with it’

Nick Kyrgios appears to have extended an olive branch to Rafael Nadal as he is keen to do an “Instagram Live” session with the Spaniard, saying “I am down with it”.

The duo are the first to admit that they are not the best of friends on or off the court with Kyrgios describing Nadal as “super salty” during an interview in early 2019.

Nadal refused to take the bait, saying “I’m too old for all this stuff” while earlier in 2020 Kyrgios backtracked somewhat as he said “I don’t really dislike him” before adding “there’s a layer of respect that we both have for each other”.

And now we could get to see and watch the two players talk about their differences live, if Kyrgios gets his wish.

On an Instagram post, BBC Sport asked their followers about video chats they want to see take place, saying a Live session between football superstars Cristiano Ronaldo and Lionel Mess is something they would “love to see these FaceTimes happen for real”.

We’d love to see these FaceTimes happen for real 🍿

And then Kyrgios piped up, saying: “Rafa lets do Instagram Live together. I am down with it. Rafael Nadal let’s do it.” 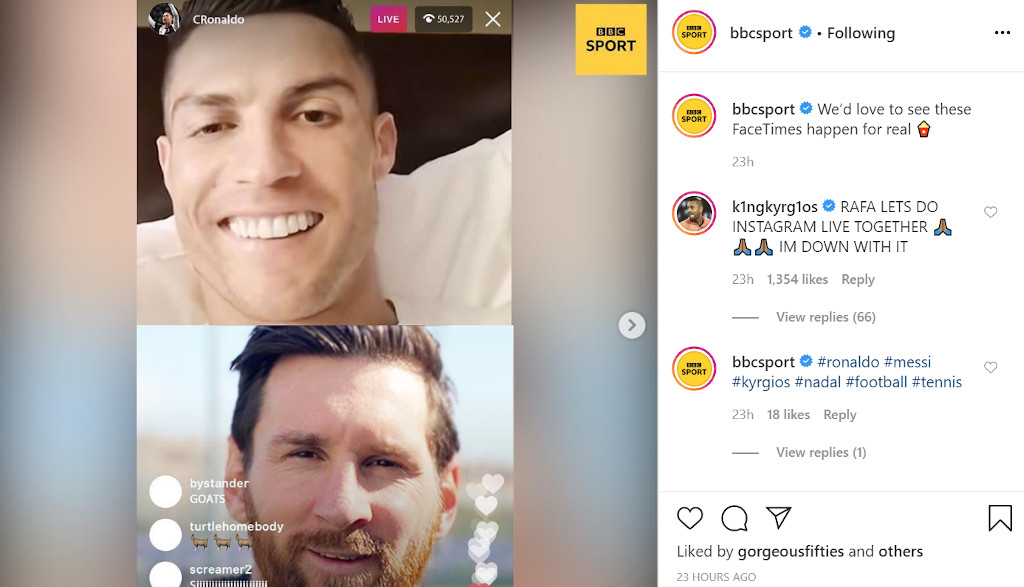 As BBC Sport said, “the ball’s in your court, @rafaelnadal 👀”.