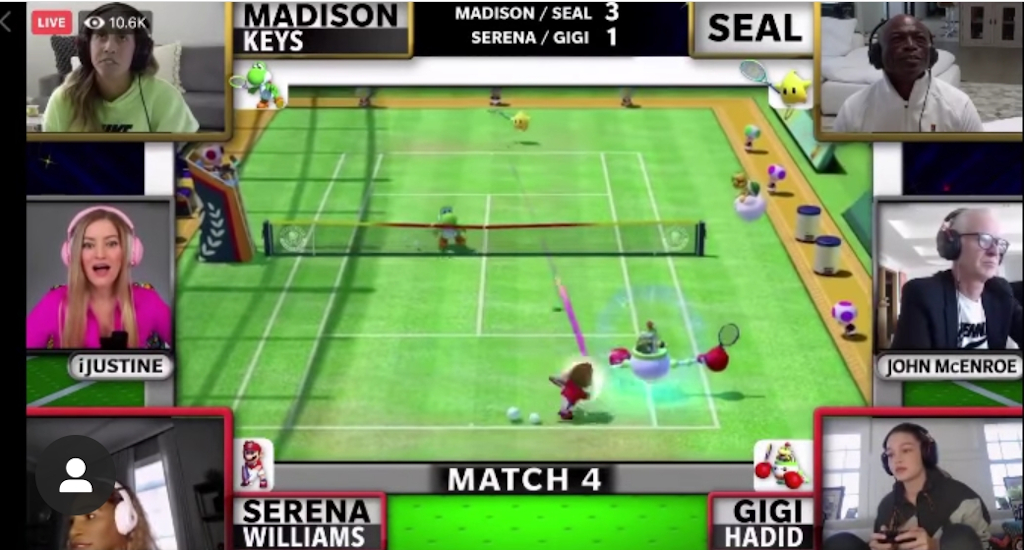 The tennis community has once again come together to raise money for charity with Serena Williams, Naomi Osaka, Kei Nishikori and Maria Sharapova all taking part in the Super Mario virtual tournament.

The Mario Tennis Aces tournament, organised by IMG Tennis and played on Nintendo Switch, saw stars compete from the comfort of their homes with each receiving $25,000 to donate to a charity of their choice.

The overall tournament winner received an additional $1m that they could donate.

TODAY IS THE DAY! Tune in at 4pm ET/1pm PT to watch the #StayAtHomeSlam LIVE on @facebookgaming. The teams are set, the bracket is set and now the only thing left to do is watch an epic virtual doubles showdown to support COVID-19 relief!

Serena and Hadid failed to live up to the hype as they crashed out in the opening round along with the Venus-Hopkins and the Sharapova-Kloss combinations.

Osaka and Bieber, meanwhile, had to forfeit their first-round match due to model Bieber’s poor internet connection.

It was getting competitive in this last matchup 😂 #StayAtHomeSlam 📹: Facebook Gaming

And it was the Fritz-Rae duo who came out on top of the 6-4 scoreline. The winners decided to donate their $1 million cheque to the No Kids Hungry charity.

@whoisaddison and I really just won the Stay At Home Slam + 1 MILLION dollars for our charity of choice @nokidhungry !!!! u can tell I was a bit pumped 😅 pic.twitter.com/XiXOioRCWS

“I was more nervous there than any of my real tennis matches,” Fritz said.