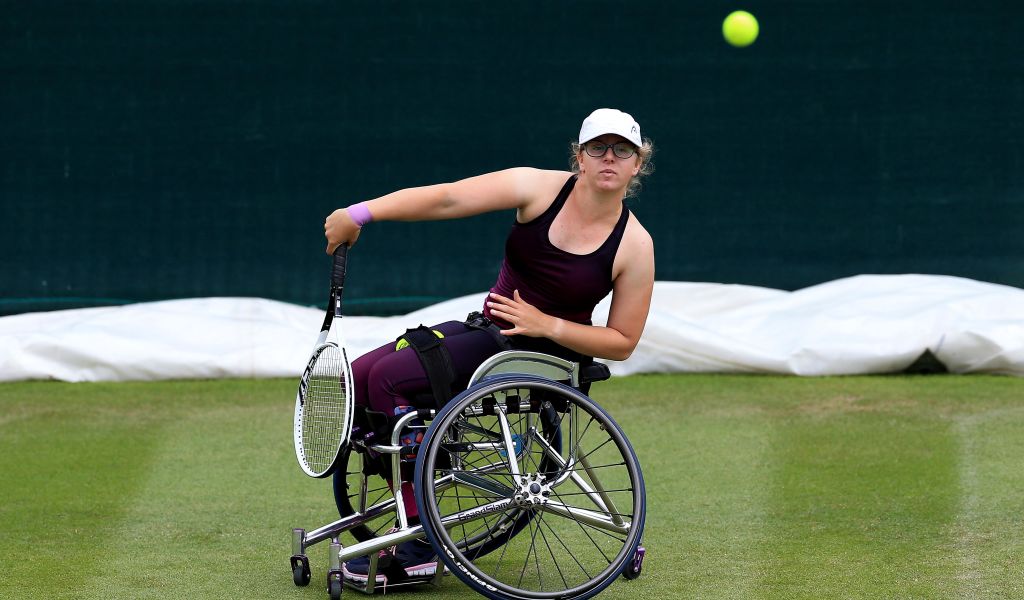 Six years after she first picked up a tennis racket, Abbie Breakwell has already taken her career to remarkable heights – and now she wants more.

The 19-year-old turned pro in 2019 and has rapidly risen up the world rankings to her current position of 33, with her story an inspiration to those looking to follow in her wheel prints.

Abbie has no intention of stopping her rise and her drive and passion to reach the top is boosted by ongoing support from the LTA, her racket and clothing sponsor Head and RGK, who supply her with the wheelchair she competes in.

“It’s not cheap to compete in wheelchair tennis and that’s why the backing of the LTA and my sponsors is so important,” begins Abbie.

“It costs about £1000-£1500 per tournament to play and get there, and you need to do about 16 tournaments a year, plus then you have training, travel costs and it amounts to a large amount,” begins Abbie, who was a torch bearer for the upcoming Commonwealth Games in Birmingham earlier this week.

“Even a sports chair is around £8500 for a good model, and obviously all those things add up. So we’re very lucky that the LTA gives us help and a lot of funding towards our career, but it’s still a lot that we have to fund ourselves and sometimes that can be very difficult.

“I think Great Britain is definitely one of the best countries in how they support their players. There are great events like the British Open across the country that allows us to create a family among the British player and we all support each other.”

In recent years, Britain has produced some of the best wheelchair tennis players in the world, with the likes of Alfie Hewett, Gordon Reid and Lucy Shuker impressing globally.

Tennis365 sat down for a chat with @AbbieBreakwell at @the_LTA British Open in Nottingham. There is so much more to come from this rising star of tennis. pic.twitter.com/SbE3RBJXip

And Breakwell takes great inspiration from those she is looking to emulate, with recent Wimbledon runner-up Hewett having a significant impact on her as a junior.

“Alfie and Gordon are such good players and they are always willing to go and take photos and go and hit with kids,” she continues.

“When I was the junior here and I’d just started out in my first year of playing, Alfie got told off because he saw us kids playing and having fun and jumped on with us.

“He spent an hour and half on court with us juniors. It was absolutely brilliant, just to spend that time with him, and there’s no segregation between the top players and those who are lower down. We’re all friends and we all get on really well.”

With an incredible level of British success to admire and a strong platform to work on, it is easy to see why Breakwell is so ambitious.

In recent years wheelchair tennis has moved to all the Grand Slam events – with the US Open set to expand their draw to 16 players – and has become one of the biggest events at the Paralympics.

Though the 19-year-old will need to work on her ranking to enter the Grand Slam and Paralympic stage, she is not afraid of the hard work needed to do just that.

“My dream is to play at Wimbledon and hopefully win at Wimbledon. I want to compete in the 2024 Paris Paralympics, that’s a big aim for me,” added Abbie.

“I think it’s very realistic. I need to go to around 21st in the rankings to get automatic qualification. We still have another two years to go so it is a very strong possibility.

“It’s definitely a challenge that I’m up for. The biggest thing between me and the top ten is that they’ve hit a lot more tennis balls, they’ve got a lot more experience and the only way to get that is with time and practice.”