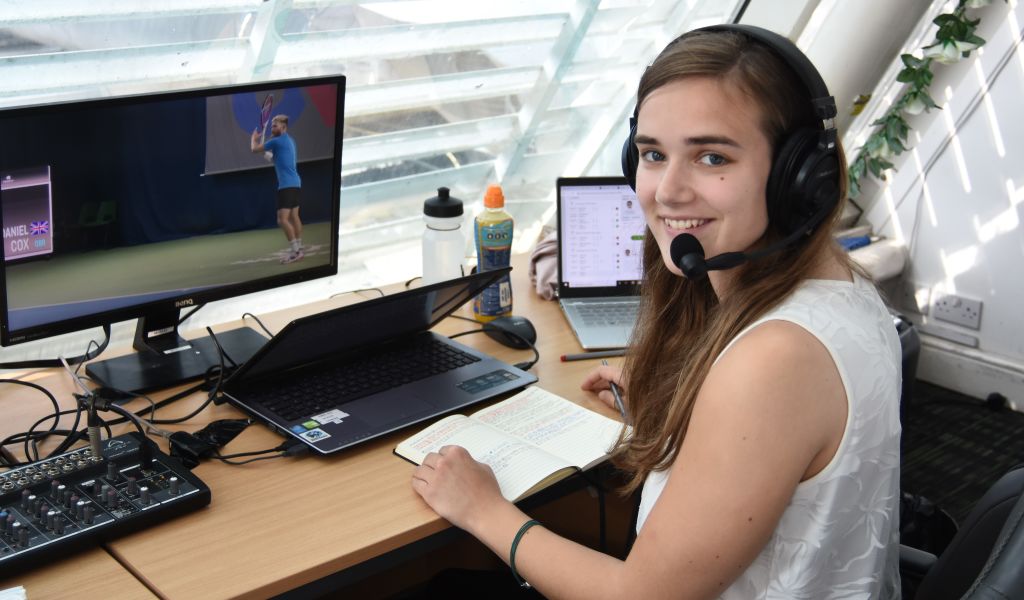 Abigail Johnson was just 18 when she took her first steps in tennis journalism and now she is rising up the ranks of the game’s commentators and is preparing to report on the 2022 Australian Open in Melbourne.

Female commentators working on men’s matches have been a source of heated discussion in some sports, yet Abigail has never felt any of that animosity in a tennis landscape that long led the way in gender equality on and off the court.

Abigail sat down with Tennis365 as she worked at the UK Pro League Finals Week and we chatted about all aspects of a sport that has always been her passion.

Tennis has paid equal prize money to male and female players for so long and has always led the way on equality compared to other sports. Has that helped you on your own tennis journey?

Yes, I think so. I have been very fortunate at the time I’ve come into this because people are keen to give women a chance in sport, and it has definitely been more of a help than a hindrance to me.

Women’s tennis is by far the biggest women’s sport in the world in terms of the prize money it carries, the prestige it carries. Also, this is a sport where the men’s and women’s grand slams take place as one event. I think that women’s sport is in a very good place when it comes to tennis and I’ve never felt unwelcome whether I’m working on men’s tennis, women’s tennis – if you know your stuff, have put the effort in and shown that you truly care then you are valued.

Do you feel other sports could learn from tennis when it comes to equality of the sexes?

Possibly, but women’s football and men’s football operate very separately and that is a factor. They don’t play in the same tournaments, as we do in tennis. If you look at our men’s and women’s grand slam events, they are played and broadcast at the same time on the same channels, but football just doesn’t have that. Rugby doesn’t have that either. There’s always more that can be done but men’s and women’s tennis is in a good place.

You have done a lot of commentary work with the UK Pro League over the last couple of years, so tell us how important the competition is for British players.

I’ve had so many players who have competed at the League this year tell me that they probably wouldn’t have been able to carry on their careers without this tournament. A lot of tournaments keep getting cancelled last minute due to COVID, and that has made it hard for players outside of the top 100 to make a living from the sport. So to have the UK Pro League with top-level tennis and good prize money up for grabs has been vital for a lot of players. They have come away from UK Pro League weeks benefitting from the match practice and have kicked on in their next event, which has been great to see.

Is it fair to say you enjoy working at events like the UK Pro League as much as the biggest events on the tennis tour?

Absolutely. I love working on the UK Pro League and hopefully there is lots more to come from the competition. Of course, I want to commentate on the big events, I want to work at that level but whatever else I do I want to be here giving a profile to the players that need it. Naturally, people want to work where the money is and that’s how this sport goes. You want to go sit at Centre Court at Wimbledon and get a commentary box at one of the best tournaments in the world but working at this level is so enjoyable. I have loved working on the UK Pro League, it is a real passion of mine. The talent further down the rankings ladder is there it just doesn’t have the profile, the money invested in it, the media attention which is going to generate interest.

Tell us about your experience covering Emma Raducanu?

I met Emma when she was 16 at an ITF event in Bolton in 2019, and then I commentated her coming through the UK Pro League last year and winning. So when people said Raducanu came out of ‘nowhere’ I knew where she had come from, I knew she was going to be this good. Maybe not as early as this, but we could all see the talent she had. I think she really underlined that experience is overrated when you’re that good and you’re that prepared for it. I don’t know that anyone could have called her winning a grand slam this soon but you could definitely tell just from the manner she went about things on court and the natural power, timing, tennis IQ and tennis instinct that she was destined for great things.