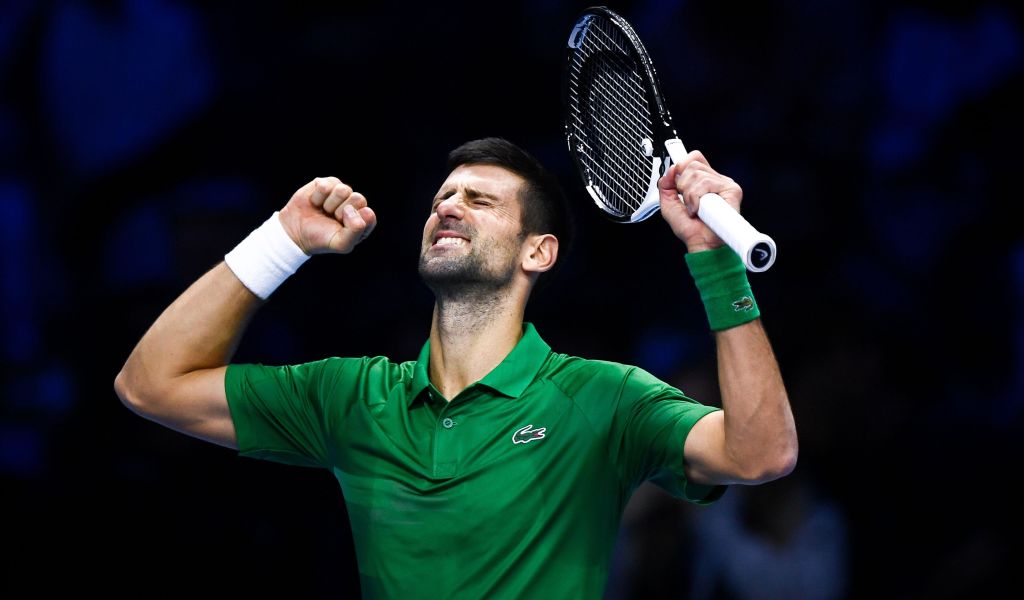 As Novak Djokovic sat down at the end of the second set of his match against Daniil Medvedev at the ATP Finals, there were genuine concerns for his well-being.

With his right hand shaking uncontrollably and his agitated appearance suggesting he was in the midst of some kind of health crisis, it seemed inconceivable that the 21-time Grand Slam champion could play another full set and win a tie-break against his Russian rival.

Yet that is the story that played out in Turin, with the fluid Djokovic took from the bottles his courtside team prepared for him clearly having a positive impact on his physical state.

At one point, Djokovic was seen inhaling from a plastic bottle and taking a powered substance to help him get through the challenge he was battling.

And while he didn’t seem to be comfortable at any point in the third set, he found a way to get to the end of the match and win, showing the heart of a champion.

Djokovic was already guaranteed to top the group and play Taylor Fritz in the semi-finals on Saturday but he dug deep to avoid defeat, completing a 6-3 6-7 (5) 7-6 (2) victory after three hours and 11 minutes.

“It was quite alarming,” declared former British No 1 Annabel Croft in her role as an Amazon Prime analyst.

“Novak is already through to the semi-finals of this event, so you wondered whether he might pull out at the end of that second set because he looked very unwell.

“Extraordinary scenes, I’ve never seen anything like it. He looked in control of the match and then he left the court at 5-4 and he lost a little bit of momentum, but he was clearly having physical problems.

“Seeing him like this… he’s not even walking properly. He is stumbling, he was looking so unwell, his right hand shaking. I couldn’t imagine he would want to continue the match.

“There is a lot to digest at the end. He left everything out there on the court and it underlined the character of Novak Djokovic and why he has won 21 Grand Slams.

“He was really suffering physically. He looked like he was going to be sick, his hand was really really shaking. I’ve never ever seen that from him.

“I don’t know whether he had low blood sugar level and whether he hadn’t eaten the right things. I’m sure his team will look into it.

“Then the rallies became so physical and it was a phenomenal contest.”

Djokovic let out a huge roar as he hit a stunning forehand to win the match that appeared certain to get away from him and he offered this verdict on the match.

“A huge relief,” said the Serbian. “Daniil and I had some huge battles in the past and it was going to be his last match of the season, so I knew he would not want to end on a loss.

“I didn’t physically so well in the third set, struggled a lot. It’s a battle, it’s a fight. I’m proud to have found the last drop of energy to come through the match.”

When asked whether he came close to pulling out of the match he added: “I wasn’t even thinking about it. This match against one of the greatest ruvals I have was very important today regardless of whether I have already qualified for the semi-finals.”

It remains to be seen whether Djokovic can recover physically in time for his ATP Finals last four match against Fritz on Saturday and there will also be questions about his health after what was a worrying episode for long periods of this final group stage match.

For Medvedev, who won the ATP Finals title in 2020 and reached the final again last year, leaves Turin having lost each of his three group matches in deciding tie-breaks.

READ MORE: Novak Djokovic on accusations he is ‘fake’ and being the ‘bad guy’ for expressing freedom of speech