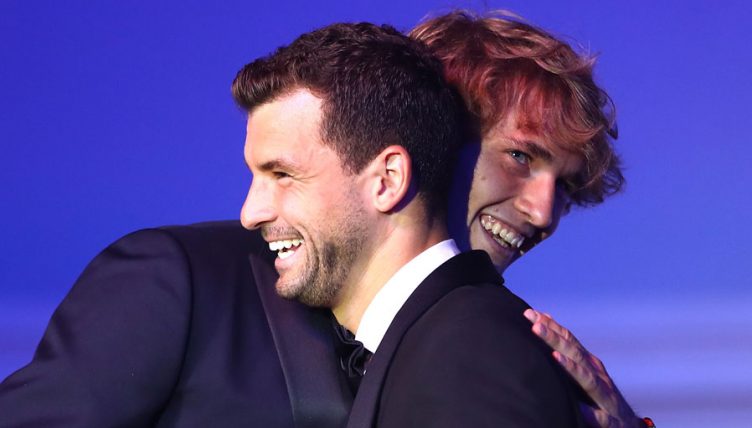 With Alexander Zverev tipped to topple the tennis top dogs in 2019, Grigor Dimitrov should provide a scary warning to the German that he can’t rest on his laurels.

Ask just about any tennis analyst right now and they all seem to be saying the same thing: The ATP Finals prove that Alexander Zverev is primed for a massive breakthrough in 2019.

And in just about every measurable way, that is an assertion with which it is difficult to argue. Zverev has won four titles in 2018, including both the ATP Tour Finals and a Masters event, and has come out of the season with an impressive win percentage of 74.7%.

Everything seems to be going his way.

However, rewind a year, and just about all of that could’ve also been said about Grigor Dimitrov, yet now the Bulgarian serves as little more than a stark reminder that there are no guarantees in tennis.

When Dimitrov won the ATP Tour finals in 2017, the next natural step appeared to be an attempt to break the hold of Roger Federer and Rafael Nadal.

The previous players to have flirted with it, Andy Murray and Stan Wawrinka, were on the shelf injured, as was the last player to actually do it. Novak Djokovic.

Ranked at number three and playing the best tennis of his career, the time appeared to have come for Dimitrov.

And yet, fast forward twelve months and Dimitrov is not challenging anyone at the top of the rankings. In fact, he’s down at number 19, barely clinging on to his spot in the top 20.

He hasn’t won a title since that brilliant victory at the O2 back in November 2017, his win percentage of 2017 – 72.1% – has dropped to a very mediocre 55.8%. He has reached just one final compared to five, and won just 3 matches all year against anyone in ranked in the top 20.

Frankly, it has been an absolute disaster of a season for Grigor Dimitorv.

The similarities between Dimitrov and Zverev are quite striking. Like Zverev, Dimitrov was once a precocious young talent of which much was expected.

He won the junior Wimbledon title in 2008 and, like Zverev, struggled to get past the first week of Grand Slams.

He was even given the nickname ‘Baby Fed’ as comparisons were drawn with Roger Federer and last year it all seemed to be finally coming together.

But since then, Dimitrov looks a broken player. His confidence is in pieces after the finesse upon which his game was built slowly start to become ragged and rubbish.

His entire service technique appears to have fallen apart, putting him on the back foot immediately, but in truth it’s just one of several problems.

Dimitrov has hired Andre Agassi to try to improve and it appears to be a wise move. Agassi, like Dimitrov, was a shot-maker who struggled to deal with the pressures of expectation after a great start to his career, so if anyone can get inside his head it is probably him.

Dimitrov’s future is one of the key stories to watch in 2019, but for now he serves as a very real reminder to Alexander Zverev that, despite his recent achievements, his toughest tests are yet to come.