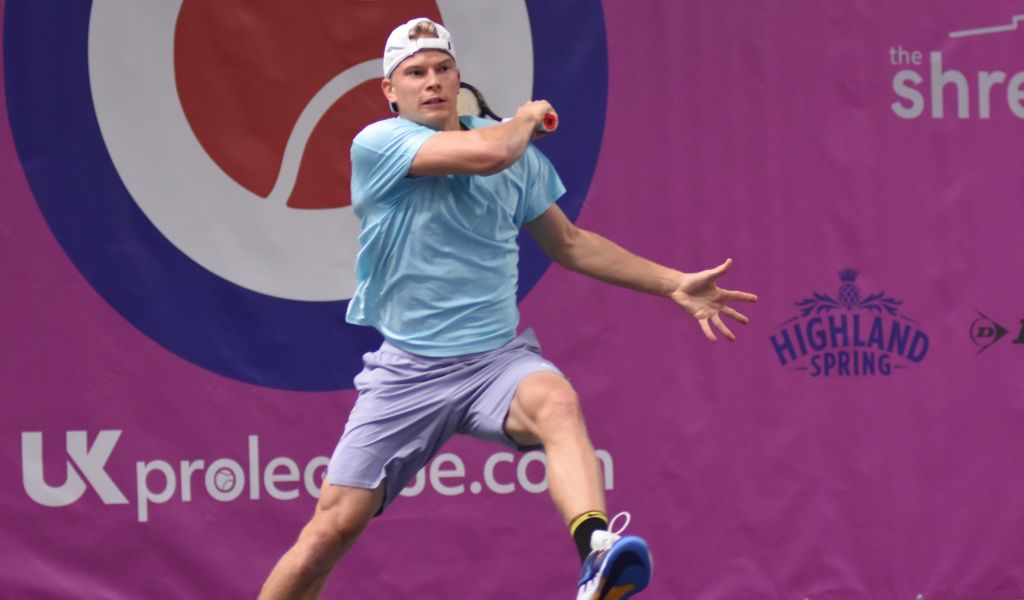 Making a breakthrough in tennis is tougher than most sports, yet rising British star Anton Matusevich believes he is on the right path.

The 20-year-old won the US Open junior doubles title back in 2018 and is now setting his sights on making 2022 his breakthrough year.

In an exclusive interview with Tennis365, Matusevich has suggested the challenges presented by the global pandemic have added to the hurdles thrown before players attempting to find their feet on the professional circuit.

Speaking to us at Finals Weeks for the UK Pro League event in Shrewsbury, Matusevich suggested a series of factors need to fall into place at the start of a successful tennis career.

“Making a living is not easy at the start of your career,” says the powerhouse player who hails from Kent. “Tennis is a tough sport to get into and trying to do it financially on your own is not easy.

“The LTA helped me out big-time during Wimbledon by sending a coach to work with me and that’s so important. Working on your own is tough a few levels and having a coach to give you some support is vital.

“Coaches don’t come for free and you need to invest in your career to have a chance, but funding it at the start is tough.

“That’s why the Battle of The Brits matches that were arranged by the LTA last year and this UK Pro League is so important for us.

“Covid didn’t help bevies a lot of tournaments were cancelled and I lost some sponsors because of it, but I have just signed a new deal with Migom Bank and help like that is vital at this stage of my career.”

Emma Raducanu won the UK Pro League last year and her success since has inspired those following in her footsteps in this year’s event to believe anything is possible in the sport, but Matusevich is setting himself realistic targets.

“I feel like I have a long way to go,” he continued. “I need to add consistency to my game and that means playing competitive matches on a regular basis and improving. You will lose a lot of matches at the start of your career, but playing tournament is what it is all about.

“It is a long and difficult journey to succeed at tennis. This sport requires a lot of dedication and money to and also, tennis is unforgiving as you cannot be injured in any part of your body. If your little finger hurts, you can’t hold a racket, so it is tough.

“Then you have so many great players down the other end of the court causing you nightmares and you are out there on your own. You have to be ready for it mentally and physically.

“If you fully commit to the sport, get everything right on and off the court, I believe you can crack the top 100. You also need to be very good and what Emma Raducanu has done this year shows what is possible if you get it all right.

“Radders is a ridiculous tennis player. I wasn’t expecting her to win the US Open so soon after she won the UK Pro League last year, but you could see how she was progressing as the tournament went on and by the end, she was getting better and better. At Wimbledon as well, she was fantastic so well done to Emma.”

Matusevich is a contender to win the UK Pro League and the £15,000 cheque up for grabs this week and he is relishing the experience in Shrewsbury.

“The organisers have done an incredible job with this UK Pro League event,” he added. “It was a massive confidence boost for me at the start of the year to play in these Pro League matches and the standard of play here is very good.

“I struggled on my first week, but match practice is so important and by the second and third week, I was playing really good stuff. The more you play, it helps you game massively.

You can take confidence from the matches you play in the Pro League and it can help you to get ATP points, so it is fantastic for us.”

Finals Week of the UK Pro Tour continues with the final on Sunday and all coverage is on BT Sport, The Tennis Channel and UKproleague.tv, with the Finals Week also broadcast live on free to air channel FreeSports (Freeview Channel 64 / Sky Channel 422 / Virgin Channel 553 / BT TV Channel 64 / TalkTalk Channel 64).