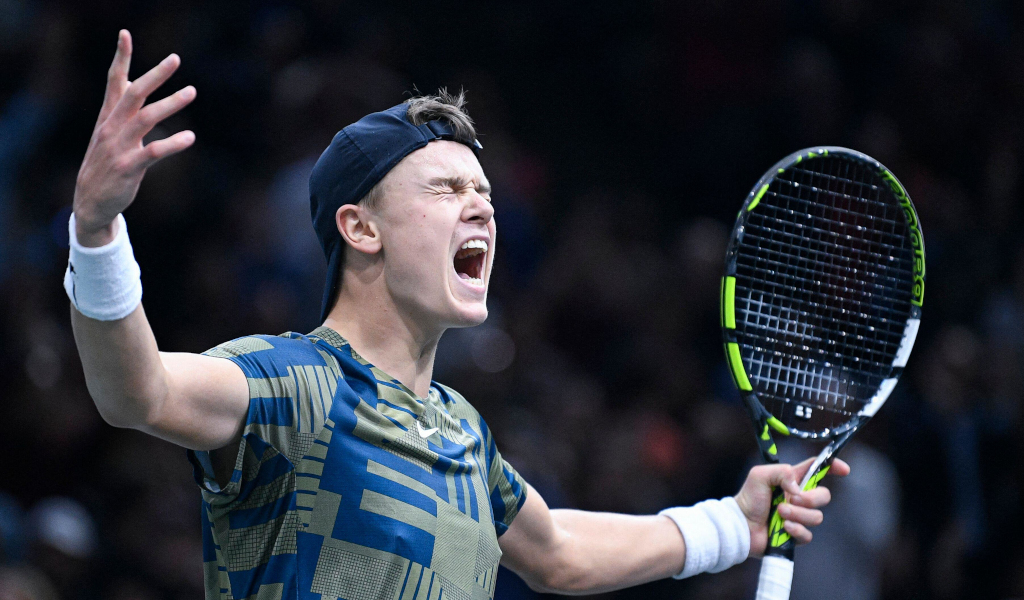 Holger Rune always backs himself to win matches, but he knew he was up against it when he faced Novak Djokovic in the final of the Paris Masters and to make matters worse he also found himself 3-1 down in the deciding set.

So how did he turn things around?

But a maiden ATP Masters 1000 final doesn’t get much bigger than playing 21-time Grand Slam winner Djokovic – a man who has won 38 of his 56 Masters finals.

The teenager, though, backed himself going into Sunday’s showpiece match in Paris Bercy.

“I would say always before matches I believe I can win, no matter who I’m going to play,” he said. “Obviously I know it was going to take some extra today because it’s in the final. He played, if I’m not wrong, over a hundred ATP finals in his career. He’s much more experienced than I am.

“I just tried to use my young power, willpower, to do everything I can to put him under pressure. I played great in the important moments today, and that was what made the difference. He was really tough to play. It’s probably one of the toughest matches I’ve ever played in my life.”

After losing the first set on the back of a solitary break in game four, Rune turned the tables in the second set as he broke in game two to take it to a deciding set

Djokovic appeared to turn the screw as he broke in game four to lead 3-1, but Rune wiped the advantage out quickly by breaking back in the next game and then claimed a second break in game 11.

Asked how he turned things around, he explained: “I really tried to stay in the moment, because I feel like I couldn’t, you know, just tell myself that it’s not acceptable to lose games.

“You know, I just had to accept it, because Novak, he’s obviously an amazing player, amazing athlete. So I have to accept that he’s going to break me and I just had to move on after that, try to see if I can get a chance in his serving game.

“I really stayed in the moment. After I got broken in the third, I was there. I tried to make him play on every return, was good enough to get the break. After that, you know, at 3-All, 4-All, 5-All, and then everything is open. As you saw in the end it was, you know, very open.”

But ultimately it was his bravery that got him over the line.

“I think to be brave, honestly, because especially in these kind of circumstances when you play in a final, for me the biggest final that I’ve ever played in my life, it’s really about trying to be brave and be solid at the same time,” he said.

“Because, you know, obviously I was very nervous before, playing Novak on this occasion is a bit stressful. So I had to tell myself to calm down, but still, you know, believe in my serve and go for my shots. I’m not going to beat him just by pushing the ball back.

“I really had to do something, be creative, and I was doing that. I made a few dropshots here and there, tried to change the rhythm. You know, it didn’t always works, but a few times it did. It worked enough today, so I’m happy.”