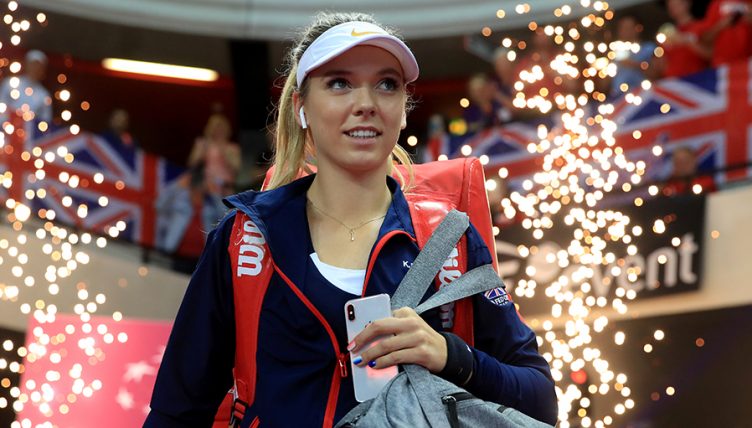 British tennis star Katie Boulter has launched an initiative she hopes will inspire kids across the UK to pick up a tennis racket, offering a unique coaching experience with the WTA Tour professional.

The initiative, which carries the #HitWithKatie hashtag, is open to all under 18s in the UK and simply requires people to respond to her social media posts stating why they should be considered for the once-in-a-lifetime experience.

Commenting on the initiative, the former world No. 82, who returns to competitive action at the Progress Tour Women’s Championships next week, said she was excited to act as a role model for stars of the future.

“I’ve been wanting to do this for a while now and I really feel like now is the time to do it. With Wimbledon being cancelled, I just think it will be a really fun thing to do,” she said.

“The eyes of the country and the tennis world would have been on Wimbledon during the Championships, and it’s typically the moment that many kids would have been experiencing tennis for the very first time. In light of that lost opportunity, I want to try and make a positive difference by giving the chance for one budding tennis player to experience the game I love in a unique way.

“There were many motivations that drove me to make it as a professional tennis player, one major one was the ability to inspire kids to pick up a tennis racket, because I was once that little girl watching the star names on television at Wimbledon wanting to be like them. That is why I am who I am today, so if I can do that and influence the next generation that would be hugely satisfying.

“I’m very aware of my position as a professional tennis player and I understand the need to give back to the sport and use any influence I have in a positive way. I’m so excited about the prospect of providing what, I hope, will be a truly memorable experience. As lockdown restrictions ease and life gets back to something approaching normality, I’ll be looking at more ways I can help get more people inspired by, and involved in, tennis.”

British No.2 Heather Watson will compete alongside GB Fed Cup teammates Harriet Dart and Boulter at the Progress Tour Women’s Championships next week, which will be staged at the LTA’s base in south London.

#HitWithKatie is open to all under 18s in the UK. People can enter directly via responding to Katie’s original post or be nominated by a parent, guardian or friend. Please find the full entries requirements and terms and conditions by visiting any Katie Boulter’s social media accounts.