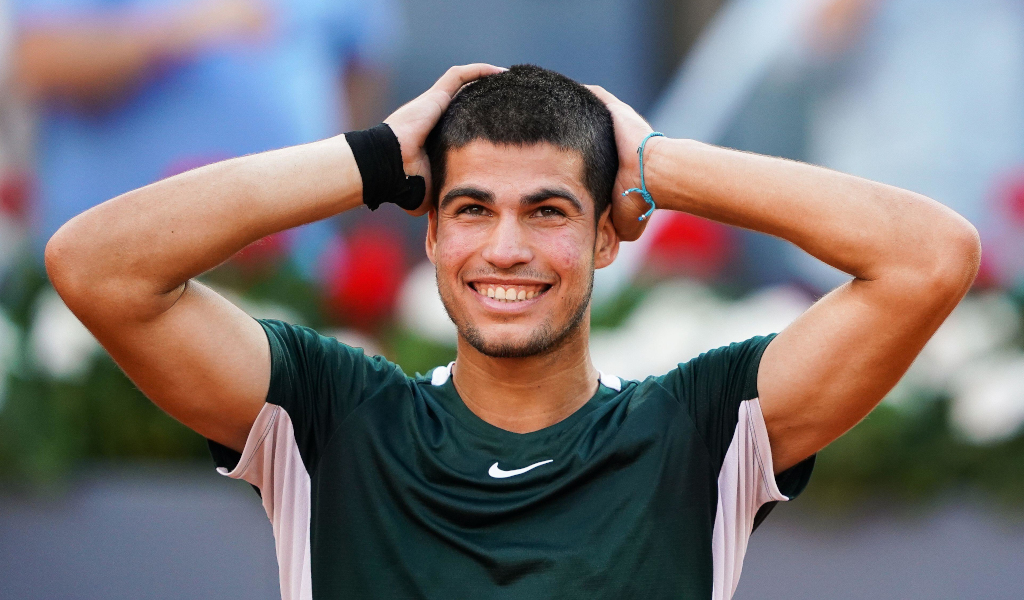 When Alexander Zverev paid tribute to Carlos Alcaraz after being thrashed by the teenage superstar in the Madrid Open final on Sunday evening, at least the German could see the funny side.

During the courtside interview afterwards, he joked: “Even though you are still five years old, you are still beating us all, so great to see for tennis that we have such a new superstar who is going to win many grand slams, who is going to be No 1 and is going to win this tournament many times.” There is life after the Big Three finally crash and burn. It looks like this new kid on the block wants all the candy.

Alcaraz is probably the “five-year-old” Zverev wanted to be when he first came onto the scene to challenge for accession to the Fedal and Djoker Game of Thrones. While Andy Murray kicked on after winning an Olympic gold back in 2012 in his mid-twenties, Zverev still awaits his first touch of real major silverware with a temperament that appears to be reaching fever pitch.

His sense of humour soon disappeared after the match, as he accused the ATP of poor scheduling. Twenty-five-year-olds should not be forced to go to bed at 4am.

Meanwhile, Alcaraz has shown the way to the ‘elder statesmen’ of the Next-Gen talents still seeking access to Grand Slam success. There is a way in and the 19-year-old has smashed the door down and is after the keys to the main lock.

As the quickstep double of the French Open and Wimbledon come into view, Alcaraz can realistically eye up some major scalps and real progress in the longer format. The new world No 6 is not scared of anyone having dealt with Rafa Nadal and Novak Djokovic like an old pro at squeaky bum time.

It will only be his body that could break down, as it did last year when he lost to Felix Auger Aliassame in the quarter-finals of the US Open. Sensibly, he is skipping Rome to rest his ankle for Roland Garros.

Alcaraz has a bit of a European Pete Sampras look to him but with a big smiling assassin grin to make opponents feel even smaller. As Zverev mentioned, this guy has a presence, the stride, purpose and maturity of a “grown man”. That’s the worry for the opposition. He’s become very good and very smart very quickly.

Murray is not one for hyperbole and is sold on the Spaniard scaling the heights: “From what I’ve seen, he’s got all the tools to be at the top of the game very soon. I think physically he’s extremely strong and moves great around the court. He obviously plays well on the clay and on the hard courts which isn’t the case for all the young guys.”

His finals record is an impeccable 5-0 already and even now, at this early stage, there is a hunger to kick on. Zverev, the 2018 and 2021 ATP Tour finals winner, is still waiting to land the big one. Likewise, Stefanos Tsitsipas talks a good game about working harder and not “staying up late” but is still not quite there. Dominic Thiem admitted he “fell into a hole” when finally making the breakthrough at Flushing Meadows.

Back in the not so distant days when the thirty something top three could still fight among themselves to claim the next major trophy, Roger Federer mused on the younger brigade: “You have to hit a lot of good shots to come through a Murray or a Djokovic. Over five sets, it catches up with you and it’s favourable for the top guys.” Alcaraz hits a hell of a lot of good shots through opponents.

Novak Djokovic hails ‘talk of the sport’ Carlos Alcaraz, says teen is ‘one of the favourites’ for French Open

There are no guarantees but all eyes will be on this young man as he steps on the ladder that shines the brightest in Paris. Didn’t a certain Spaniard win his first title there at the age of 19? Rafael wotsisname…