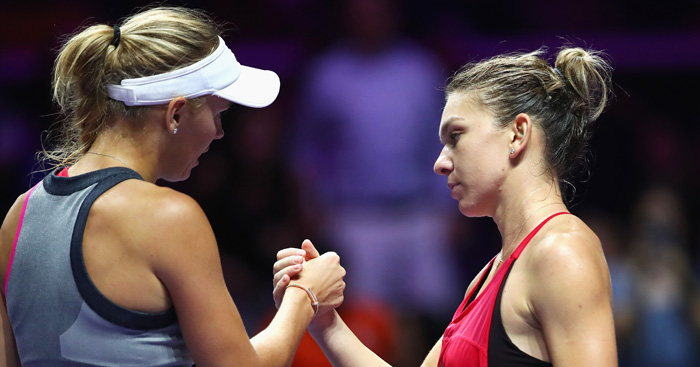 This is the first time in the Open era that both finalists have saved match points during the tournament, while Halep is the first woman to have done so in multiple matches and reached the trophy decider.

The world number one has had the look of a woman who will not settle for anything less than silverware ever since arriving in Melbourne.

She twisted her ankle in her first-round match, then saved three match points against Lauren Davis in the third round, winning the deciding set 15-13, before surviving two more match points in an extraordinary final set against Angelique Kerber in the semi-finals.

Wozniacki, meanwhile, trailed Jana Fett 1-5 and 15-40 in her second-round match before winning six games in a row.

Halep has certainly come a long way from the player who was briefly dumped by coach Darren Cahill last spring because of her poor on-court attitude.

The Romanian fought to reach her second French Open final last summer and looked poised to win the title only for Jelena Ostapenko to blast her way to the title.

Halep’s reaction to the disappointment was to add more aggression to her game, and ultimately her bravery at the biggest moments was what won her the match against Kerber.

She said: “I feel more experienced. Also stronger mentally. And the way I play, it’s different. I feel I’m more aggressive. I did 50 winners (against Kerber). Eight aces. I hope to keep this also on Saturday.

Halep and Wozniacki share the dubious distinction of having held the number one ranking without winning a grand slam title – and the winner on Saturday will top the standings on Monday.

Their paths, though, have been different. Wozniacki was a teenage prodigy who faded but has now risen back to the top of the game while Halep emerged as a grand slam challenger four years ago and has been a consistent member of the top 10.

What they share is a deep desire to stop knocking on the door. Wozniacki is playing in her 43rd grand slam and Halep her 31st, and whoever wins will join the top 10 for players taking the longest time to win a maiden title.

Should Wozniacki win, she would reclaim the number one ranking exactly six years since losing it, which would set a new record for the longest gap.

The 27-year-old Dane, twice a losing finalist at the US Open, insisted she never lost faith, saying: “I always believed in myself. I had a tough period where I had a few injuries.

History favours Wozniacki, who has won four of their six meetings, including the last three, and she lost only two games against Halep on the way to winning her biggest title so far at the WTA Finals in October. A title that would be thoroughly eclipsed should she win the big one here.