Djokovic vs Federer: Who has the better career statistics?

Novak Djokovic and Roger Federer are two of the greatest tennis players of all-time, but who is the best of the pair?

Both men have enjoyed unprecedented levels of success in the sport and splitting them certainly isn’t an easy job. We take a closer look at their rivalry.

The two players always feature prominently amongst tennis betting tips when big tournaments come around and they are generally in the mix when the titles are being handed out.

As of July 2020, they have faced each other 50 times during their respective careers, with Djokovic winning 27 of those meetings.

The Serbian leads 13-6 in all finals and 11-6 in Grand Slam Matches, numbers that suggest he is the better player.

However, having held a 13-6 advantage over Djokovic in 2010, Federer could argue that age has become a factor as their careers have progressed.

Federer and Djokovic have met five times at the Australian Open, with the Swiss star recording just one victory in the first Grand Slam of the year.

Their first-ever meeting in a major was in the 2007 edition of this tournament, with Federer securing a 6-2, 7-5, 6-3 victory on his way to winning the title.

Djokovic gained his revenge the following year, beating Federer in straight sets before claiming the first Grand Slam title of his career against Jo-Wilfried Tsonga in the final.

Their most recent meeting came in the semi-finals of this year’s tournament, with Djokovic beating Federer in straight sets.

The pair have had just two meetings in the French Open, with each player recording victories over the other in the semi-final stage of the tournament.

They first met at Roland Garros in 2011, with Federer prevailing in four sets to end Djokovic’s unbeaten start to the season.

That result gave Federer a 14-9 lead in the head-to-head, but Djokovic subsequently gained compensation by beating his rival in straight sets the following year.

Both men failed to go on and win the tournament, with Rafael Nadal proving too classy on clay on each occasion. 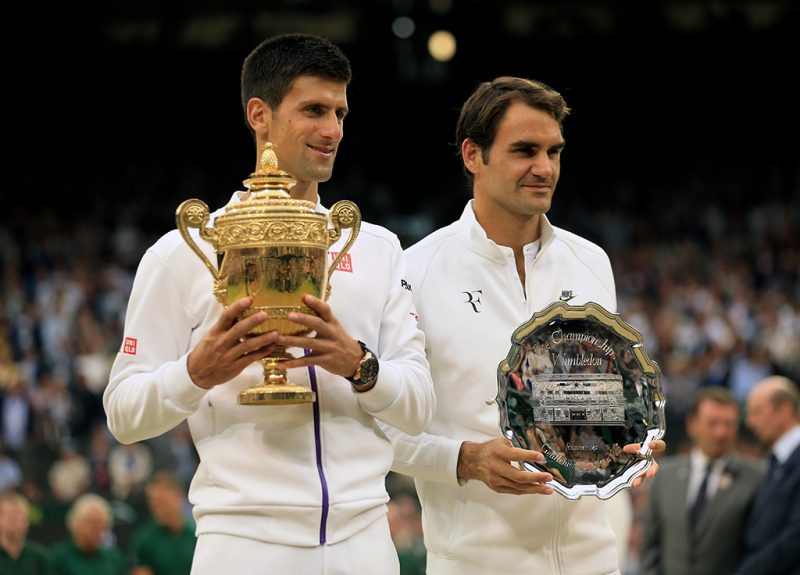 Despite Federer having a reputation as the king of the grass courts, he trails Djokovic 3-1 in their meetings at Wimbledon.

Their clash in the 2014 final is one of the best matches of all-time, with Djokovic eventually winning in five sets after a near four-hour battle.

However, their meeting in the 2019 topped that for drama as the two players went head-to-head for four hours and 57 minutes on Centre Court.

Djokovic took the deciding set 13-12 after a tie-break, but admitted afterwards that Federer had outplayed him for most of the match.

There is nothing to choose between the pair at the US Open, with each player beating the other on three occasions.

One of their most notable encounters came in 2010, when Djokovic saved two match points before going on to win the semi-final.

He repeated the trick the following year, recovering from a 5-3 deficit to take the final set 7-5 and leave Federer frustrated once again.

They last met in the tournament in 2015, with Djokovic claiming a thrilling victory in four sets to win the second of his three US Open titles.