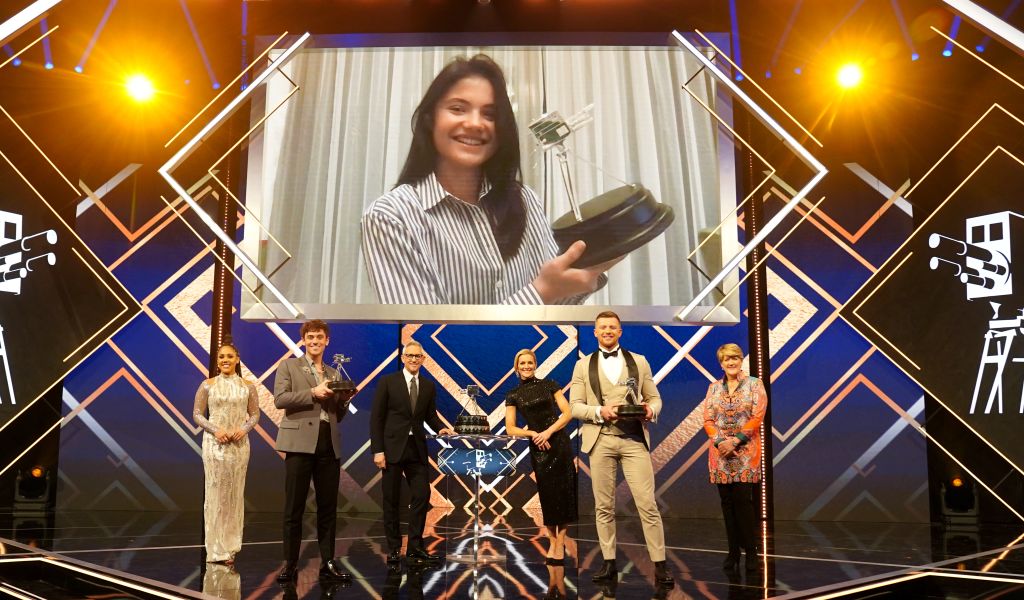 One year ago, on the same day Lewis Hamilton was being crowned BBC Sports Personality of the Year for 2020, Emma Raducanu swept aside Grace Piper to win the BT Masters title at the National Tennis Centre in Roehampton.

Afterwards Raducanu, then ranked 345th in the world and yet to make her main WTA tour debut, provided a glimpse of the steely resolve that, 12 months on, would see her succeed Hamilton to put her own name on the prestigious trophy.

“I’m pretty ambitious,” Raducanu said on that day in Roehampton. “I think the progress that I’m making at the moment, it (the top 100) isn’t too far out of the question. I really do believe I can do it.”

🏆 @EmmaRaducanu is the 2021 BBC Sports Personality of the Year! 🎉

This was her reaction…

Cue a year cut straight from the pages of the most outlandish sporting fantasy novels as Raducanu not only reached the fourth round at Wimbledon, but then proceeded to win 10 straight matches at the US Open to claim the title without losing a set.

Raducanu had played her first tour event in Nottingham only a few weeks before she seized advantage of her Wimbledon wildcard, a run only ended due to breathing difficulties midway through her clash with Ajla Tomljanovic.

But it proved to be a stepping stone to a more remarkable achievement. Arriving at Flushing Meadows, Raducanu had never previously played an overseas qualification tournament, and had her flights home booked before the main draw began.

Instead, she charged through the draw, sunk fellow teenager Leylah Fernandez in a memorable and preposterously unlikely final, and delayed her return home in order to be one of the guests of honour at New York’s exclusive Met Gala.

By the time it came round to emulating Hamilton, even world heavyweight champions and Olympic gold medallists were not going to get a look in. Britain had long since anointed its new sporting hero.

In reality, of course, Raducanu is far from an overnight success. She started playing tennis at the age of five, three years after arriving from Toronto in Canada with her family, and grew into a top prospect at Bromley Tennis Centre.

Not that Raducanu needed much encouragement, with varied interests in go-karting – starting out in a bus garage in Streatham before moving on to a proper track – motocross, horse riding, tap dancing, golf, skiing and basketball.

Outside of sport she took a keen interest in her parents’ Chinese-Romanian background: she speaks Mandarin, binge-watches Taiwanese television shows, and loves nothing more than visiting paternal grandmother Mamiya in Bucharest.

She won UK national titles at under-nine, under-12 and under-16 levels, claimed her first ITF junior title at 13 and reached the quarter-finals of the girls competition at Wimbledon in 2018, where she defeated her US Open final opponent Fernandez.

She peaked at a junior world ranking of 20 that same year, having reached the quarter-finals at Roland Garros and the US Open.

After turning 18 last November she made her senior debut at the Viking Open in Nottingham in June as a wildcard, a week later enjoying a run to the quarter-finals of the ITF 100k in the same city – a performance which convinced the All England Club to give her a wildcard entry at Wimbledon, and expediate her extraordinary rise to fame.