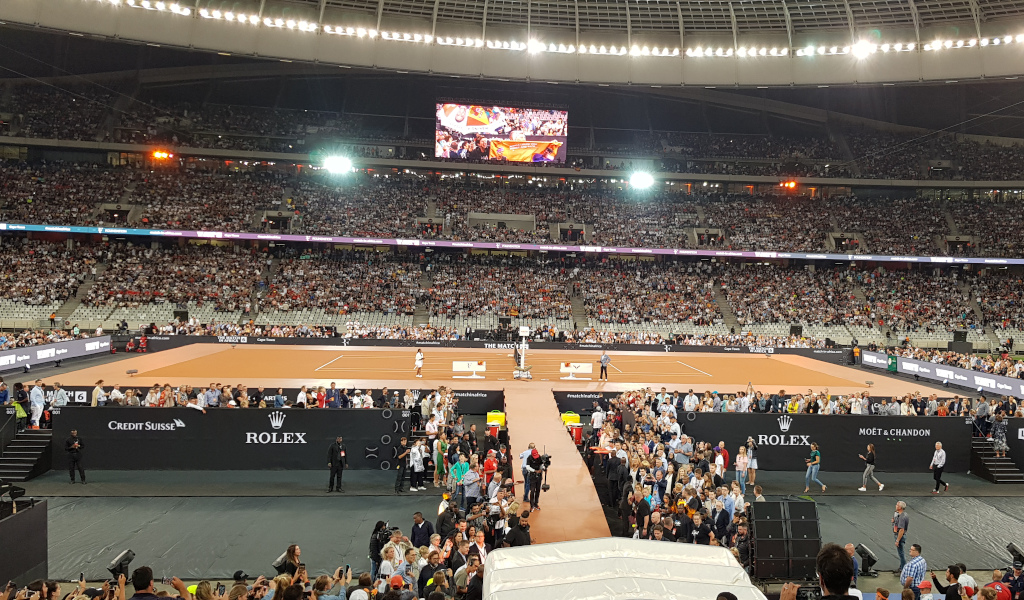 From raising a record-amount of money for the Roger Federer Foundation to setting a new match attendance milestone for a tennis match, it sure was a night to remember for Roger Federer and Rafael Nadal at the Match in Africa Cape Town.

Oh and there was also the small matter of Federer beating his long-time rival Nadal in three sets in the exhibition match in South Africa.

It was about two all-time greats – not just tennis greats, but sporting greats – coming together to give the world a glimpse of what can happen when giants join forces.

South African comedian and The Daily Show host Trevor Noah produced the humour, billionaire and philanthropist Bill Gates gave us the American star power, the Ndlovu Youth Choir brought us African flavour with their dancing and singing, and the Zip Zap Circus inspired with their tricks.

After a morning and afternoon filled with charitable events, the attention finally turned to on-court events as Federer and Gates took on Nadal and Noah in the celebrity doubles match.

Federer and Gates won the one-off set 6-3 to take their winning streak in Match for Africa doubles matches to 3-0.

And the match was as fun-filled as you’d expect from a celeb match.

Might this be the greatest rally of all time? 😅#MatchInAfrica pic.twitter.com/0LEPBLlWm2

Then it was time for the main act as the two legends took to the court, and of course it went to a three-setter.

For the record, Federer broke in the first game of the first set, Nadal then raced into a 4-1 lead in the second set to set up a decider, which Federer won after claiming two early breaks.

But that was all secondary as $3.5 million (about £2,7m) was raised for the Roger Federer Foundation, a record crowd of 51,954 watched the match and, more importantly, the two tennis greats left a lasting impressions on not only those in the stadium, but everyone across the African continent.

By the end of the night, an emotional Federer described it as “a magical evening”.

His mother Lynette, who is South African born, clearly had a ball of a time and was one of the stars of the show throughout the evening.

Nadal added: “We tried our best as always. It’s a lifetime experience playing in front of such an amazing crowd in an amazing stadium. It was a big pleasure for me to be part of it.”