EXCLUSIVE: ‘It started off as ridiculous dream in my back garden’ – Rashid Ahmad, touchtennis founder 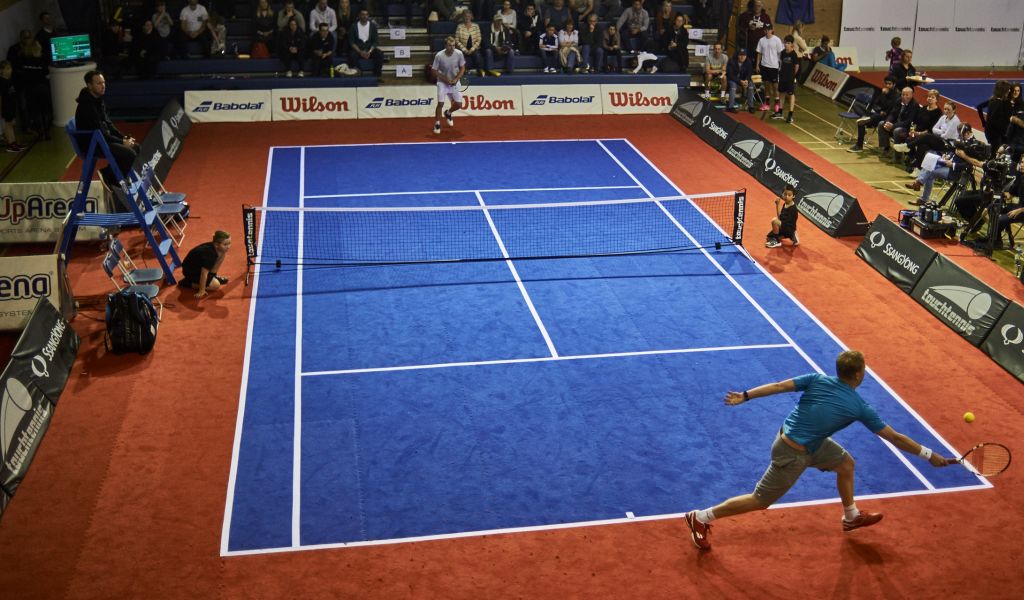 James Spencer had the pleasure of interviewing the founder and creator of the popular LTA accredited sport touchtennis, Rashid Ahmad. He explained how the idea came about way back in 2002 and how the sport has continued to grow in the UK.

How did you create the idea of touch tennis?

Rashid Ahmad: “I loosely use that term as creator or something like that. I’m the founder of a tour of people that forgot to grow up. By accident the game came about. We had a table turned over in my back garden that I was amusing my daughter with playing some weird adaptation of tennis with cut down wooden rackets. When my friends came over we ended up playing that, more than we would go and play tennis. So, they would park at my house and we’d walk to the tennis courts. In the end, they ended up parking at my house and we didn’t walk to the tennis courts.

“Eventually the rules started to change bit by bit. We moved out from central London to Surrey so I had a slightly bigger space to have a court. It was about 16 metres by five metres wide. But we only had a three-metre net. You could go around the net. You could hit up, down, anything. Originally you were allowed to hit up and then we changed it so you can hit up, down, side-ways or whatever. All shots were allowed. Around the net post, anything.

We’ve heard a lot of British players have needed a court to practice on for Roland Garros but have not had a chance due to ill timed refurbishments. Well touchtennis has a red court for you to practice on free of charge. Head over to Guildford and see us! #touchtennis #red #clay #redcourt #growingthegame #britishtennis #sport #claycourt

“At 5ft9 I decided in 2009 that actually it would suit me better to only have one serve. Because more and more tall people were playing. Then I decided no lets. Again, something that would suit me. And all of this stuff was done with the aim of this ridiculous dream of me being number one in my garden. That was it. It was never really planned to be any bigger than that. I just wanted to be the number one player of a sport that I’d come up with. Pretty much like England have done throughout their history. We’ve come up with cricket, we’ve come up with football. All of these sports we’ve come up with and ended up getting clubbed at them.

“So, I was convinced that an Englishman would be world number one. I changed and changed the rules. Eventually I realised that unless I change the rules to exclude anyone that didn’t have my name, date of birth, height, weight, eye colour, hair, address, there was no way I was going to become number one.

“It was just going to be other people were just going to get better and better. And they did. More and more people started turning up and we moved it from my garden to place by place. Anyone that would have us basically. We would mark out our courts and have our tournaments there.

“The idea was to get everyone in one place for one day of the tournament. And have a ranking system based on their results at those tournaments.

How does the ranking points work?

Rashid Ahmad: “So, similar to the old ATP. The top eight tournaments you enter count towards your ranking. If you play 20 it doesn’t matter. What matters is the top eight that you play best at. If you play seven, you would get zero point for one of them. That would bring your ranking down dramatically.

@touchtennis with some of the legends from @shedrestaurants ! Good times…

How far does touch tennis differ to normal tennis?

Rashid Ahmad: “Much of the main similarities will always remain when you think about the geometry of an oblong with a net in the middle, two rackets and a ball. So much of it tactically is quite similar.

“The difference in the rules are sudden death at deuce, one serve only, no lets. If you throw the ball up you have to hit it. And at four-games-all we play a tie-break which is a nod to the old format of tennis where the tie-break is just five points and its sudden death at four-points-all and the receiver chooses. We’ll play best of three sets at some events and best of five at others.”

What age group does it appeal too?

Rashid Ahmad: “Oddly enough, I mean when we’re best at awful things like that it appeals to four to nine-years-old. There’s no barrier in social playing the game. The tour is limited to 16 and up because we don’t want to ask every single child for permission, things like that or worry about having their parents there. So, we have the tour aimed at 16 and up. Also, we pay prize money. But the social side of it anyone from five to 95 can play.”

What equipment do you need to play it?

Rashid Ahmad: “We use a very specific foam dense foam ball. Which is unique to the sport. It’s an eight centimetre dense foam ball that we use. But the other equipment, a block of chalk you can buy anywhere. You can make your own net if you can’t buy one.  And the rackets are just 21-inch junior rackets. Any brand will do. As cheap as you can get.”

How far has the sport come from being little known to endorsed by the LTA?

Rashid Ahmad: “We started off quite small and we didn’t make any effort to grow it. Eventually it was taken on by people around the world. We ended up with players from different countries. We’ve got ambassadors like Bear Grylls and Miranda Hart, unpaid who just love the sport. It grew bit by bit through social media by being determined.”

How can the public sign up for tournaments or participate competitively if they choose?

Rashid Ahmad: “Well there’s an easy way to get into the game would be: the first thing you could do is get yourself a kit. Set up for 120 quid that’s an entire kit of a net, two rackets, four balls and a block of chalk. So, you can mark the court out in your garden. The ball is designed to bounce on bad grass, clay, on hard sand or concrete. So, that’s one way. The other way is to find a leisure centre where you can just drop the badminton net, use a single part of the badminton court just to rally. And the other one is sign up as a player and enter any tournament without the ranking. It’s not like tennis where you have to qualify. You just pay your entry fee, turn up and play. And you’ll be welcomed in as part of the family. It’s very, very welcoming as an atmosphere. It’s nothing like tennis tournaments where it can be a little abrasive.”

Some of my favourite things… This could be an #ad but it’s not! It’s simply four things that I use most days in some way or other. The only thing missing is maybe a 24kg kettlebell & @bemilitaryfit ! Thank you @dudekparagliders @jbchandelier @touchtennis run/fly/ski/train

Is it a good way for professional tennis players to train and practice with reduced court space and light balls?

Rashid Ahmad: “Well, Nick Krygios’ brother Christos is a massive fan of touchtennis. We play often whenever he’s over here in the summer. I’ve never had hits with Nick. If you ask Nick Cavaday who’s head of Loughborough, he used to take some of his top players onto the touchtennis court just to remind them they need to put more spin on their forehands for example. And because of the amount of spin you need to keep it in play, and stop them from drifting along, it can’t hurt them to practice.”

Which top male and women’s players, to your knowledge, have endorsed the idea?

Rashid Ahmad: “Tracey Austin, Jeff Tarango are the main ones that spring to mind.”

How far do you see the idea growing over the next five years?

Rashid Ahmad: “I’d like to see an increase in people playing this game. I think anything is possible when you’ve got a foam ball, anything for a net and something you can play anywhere. In India or China, where they may not have a smooth tarmac road let alone a tennis court. So, there’s no barrier. You can play anywhere.”

While, Rashid added that maybe they’ll get me on tour as well! With the idea continuing to grow, it sounds like we should all give touchtennis a go.

The tournament categories consist of Men’s, Women’s, Over 40’s mixed event, Mixed Doubles and Main Draw which is unofficially for the top 50 player standard. Anyone over 16 can create a profile and enter up to three of these events.