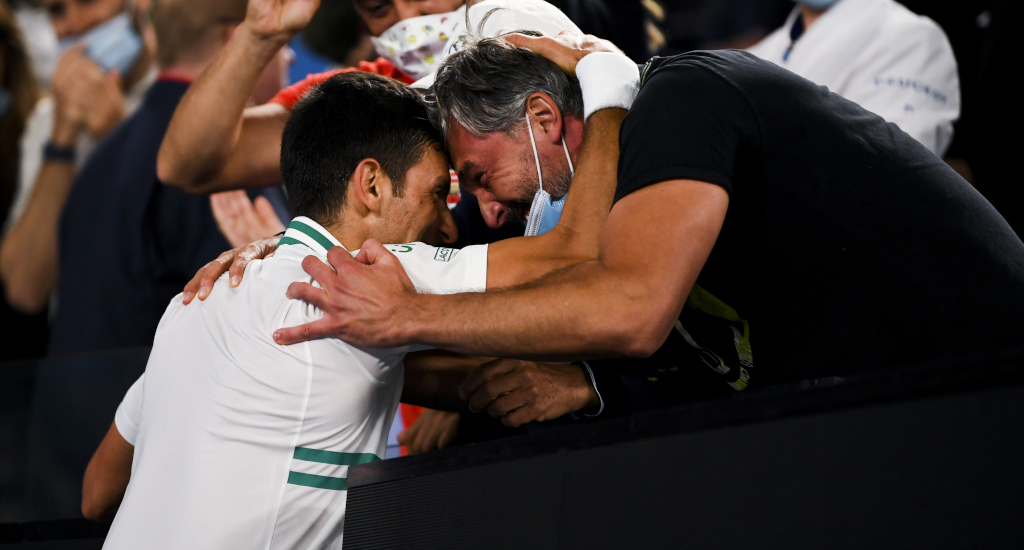 Goran Ivanisevic says Novak Djokovic’s 2021 Australian Open title success “tastes the sweetest of them all” as it comes on the back of a year in the world No 1 was “thrashed by some media”.

His victory came on the back of challenging year and his coach Ivanisevic took plenty of delight in his latest milestone as he believes the Serbian has been unfairly criticised by “some media”.

“Personally, as a coach and as a fan of Djokovic, this title tastes the sweetest of them all,” he told Tennis Majors.

“Novak would probably say Roland Garros 2016 or his first Wimbledon, but for me, after a year in which he was thrashed by some media from all disposable weapons… It feels really good. At the same time, it could turn out that this title was extremely important in the broader context (race for the most Slam titles).

“It was hectic, something we have not experienced before – 42 days in Australia, quarantine, the injury, crowd leaving in the middle of a match because of the lockdown, bleak atmosphere for a few days and then the perfect final match that Novak played from every aspect.”

Djokovic has long endured an uneasy relationship with the media, but things went further south in 2020 as he was criticised for organising the controversial Adria Tour during the middle of the coronavirus pandemic.

And when tennis eventually resumed, the world No 1 was disqualified from the US Open after he accidentally hit a linesperson in the throat while attempting to return a ball to a ball kid.

Meanwhile at this year’s Australian Open, Djokovic was accused of faking an injury after he pulled up midway during his third-round match against Taylor Fritz.

“Everything started with the Adria Tour; they were after him even before that, but in the last year it seemed to me as if I am watching that film The Texas Chainsaw Massacre (laughs),” Ivansevic explained.

“Why is he being treated that way? Probably because of his background, people from Balkans are always looked at differently; also, Novak is not afraid to speak his mind and to fight for causes he believes in. What happened at the US Open, it was as if everyone was glad because that kind of shit happened to him.

“In Australia he stood up for his fellow players and again – let’s kick Djokovic because he is the only one to speak up, everyone else stays silent. Throughout my career I have witnessed players doing all sorts of things, but nobody got the kind of treatment Novak does.

Then, the cherry on top… How shall I put this? The most perfidious, actually the saddest thing were accusations that he was faking an injury. Why on earth would he do that? Why would the best player in the world make up an injury, and he was up two sets to love at that point?! When some other top player is injured, it is considered a heroic act for them to even step on the court. But when it is Novak, he is faking it.

“Somehow he manages to deal with all of that. And the injury occurred in the third round, it is not like the tournament was nearing its end; no, he needed four more wins, and not against some unknown players. [Milos] Raonic, then [Alexander] Zverev, [Aslan] Karatsev did not reach the semi-finals by accident, and finally Medvedev, who is the best in the world in the last three months. It is just amazing.”