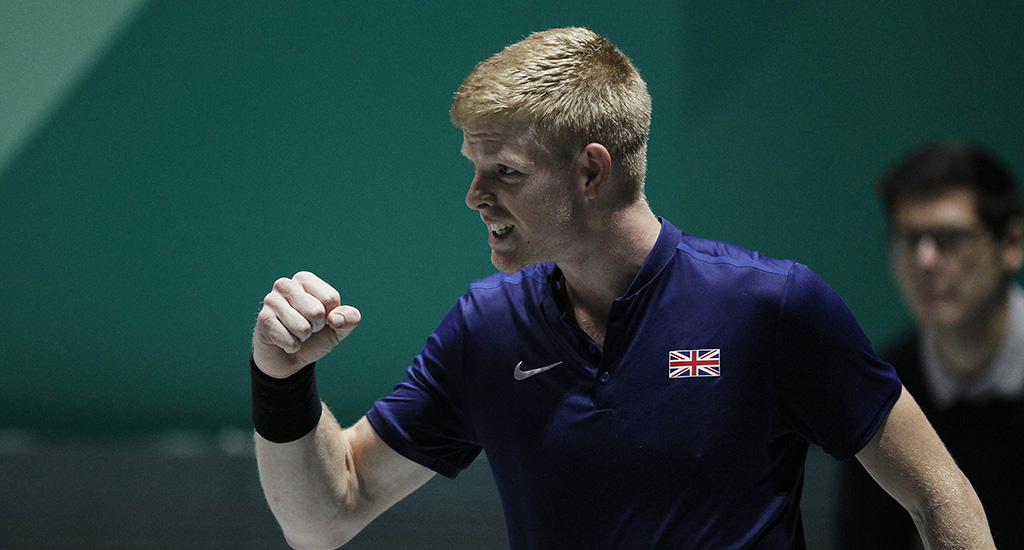 Andy Murray watched from the stands as brother Jamie Murray and doubles partner Neal Skupski once again dug Great Britain out of trouble at the Davis Cup.

Murray was left out of the line-up for the clash with Kazakhstan due to fitness concerns after his testing match against Dutchman Tallon Griekspoor on Wednesday – a contest that lasted nearly three hours.

Captain Leon Smith decided to leave him out for this one, with Kyle Edmund stepping in and stepping up in a 6-3 6-3 victory over Mikhail Kukushkin that was arguably his best performance of the season.

That gave Dan Evans the chance to send Britain through but, as against Dutchman Robin Haase on Wednesday, Evans was unable to build on a positive start against Alexander Bublik and fell to a 5-7 6-4 6-1 defeat.

With Britain unable to claim one of the two spots reserved for best-placed runners-up because of the number of sets they had lost, it was all or nothing for Jamie Murray and Skupski against Bublik and Kukushkin.

And the British pair, who had excelled against Holland, produced another brilliant performance, showing the value of having a top doubles team in a 6-1 6-4 victory.

Smith and his players can now look forward to a last-eight tie against Germany that on paper appears very tight.

There will be plenty to mull over selection-wise for the Scot. Edmund has surely booked his spot in the side along with the doubles pair, leaving Smith to decide whether to recall Andy Murray.

Smith admitted there will be no miracle return to peak fitness, saying: “It’s not going to change huge amounts. But it’s important after five weeks of not playing any competitive tennis that you play a match.

“It wasn’t his ideal match at all, but it was a match nonetheless, and that gets you going again. And Andy is not going to be difficult to get recalling on what needs to be done.

“It’s probably quite a good thing it’s a later start tomorrow. We can talk about it tomorrow, see how things are going, obviously do some practice, see how things feel, and then we can make a decision.”

Germany do not possess any star names but have two strong singles options in the hugely-experienced Philipp Kohlschreiber and fast-rising Jan-Lennard Struff, while doubles pair Kevin Krawietz and Andreas Mies are the French Open champions.

Jamie Murray said: “We’re really excited to be playing them in the quarter-finals. I don’t think our guys will hold any fear to play them, and likewise. I think it’s going to be a very evenly-matched tie.”

Edmund has had a poor season, dropping from inside the top 20 to 69 in the rankings, and only clinched his spot in the team at the last minute by virtue of a decent run at the Paris Masters.

But he produced an almost flawless display against a player ranked two places higher, striking his big groundstrokes with authority, serving very well and hanging tough under pressure.

Edmund, who defeated Novak Djokovic at the same venue last year, albeit on clay, said: “I had a good feeling about how I’ve been going about my practice this week and my performance on court. I was eager to really put myself out there and play my way. I was happy with what I did.”

A brilliant season has carried Evans to the British number one spot, but the 29-year-old appears to have hit the wall a little bit over the last month or two and has lacked energy this week.

This defeat had a lot to do with an unpredictable and explosive opponent in Bublik, who frequently sent down second serves in excess of 125mph.

That resulted in 11 doubles faults, including one on set point in the first set that landed virtually on the baseline and prompted Bublik to smash his racket spectacularly.

But his boldness also paid off on numerous occasions and the diminutive Evans was at times little more than a bit-part player in the Bublik show.

The fast, bouncy court does not suit the man from Birmingham and, provided Andy Murray is fit, it seems very likely he will not play against Germany.

RELATED: Andy Murray admits he is a bit weighty and carrying an extra ‘four or five kilos’

Asked about Britain’s strength in depth, Evans said with a wry smile: “At the minute, the number one guy is the weak one.

“If I’m needed again, I’ll put my game on the court and I’ll try to get us through. If I’m not, that’s all good as well. I’ll be there on the side supporting whoever’s playing.”