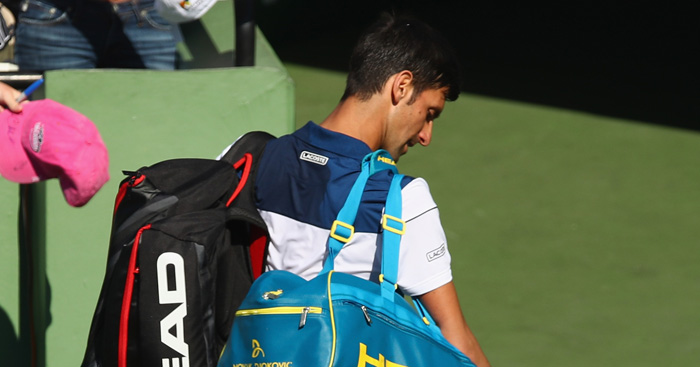 Novak Djokovic may be struggling at the moment, but Greg Rusedski sees no reason why he can’t be back to his best by the French Open.

The former world No 1 has battled to find form since returning to action after a “small medical intervention” on his elbow.

He first lost his opening match against Taro Daniel at the Indian Wells and then suffered a similar fate against Benoit Paire at the Miami Open last week.

Outside of the Sunshine Double he only competed at the Australian Open, which was his first tournament since the Wimbledon quarter-final, as he opted to sit out the remainder of the 2017 campaign due to his elbow injury.

“I am not really concerned about Djokovic,” Rusedski told Sky Sports. “I think he will be back once he feels fit again and is mentally there and gets the matches in.

“The question mark is how well the elbow is after the surgery. That was one thing he had to get done and he has but it is just a matter of time, being back in match situations and finding a way to get the job done.

“I wouldn’t be surprised to see the old Djokovic back [to his best] possibly before the French Open or for Wimbledon.

“You don’t just lose it, being such a great player. It’s mental but it is also physiological because at times it looks like he is getting tired when historically we have never seen him look fatigued.

“But when you have been away from the game it does take that little longer. We are not all Roger Federer!”

Djokovic admitted after his Miami Open defeat that the plan was to compete at the Monte Carlo Masters next, but he also revealed that he might tweak his schedule adding “let’s see what happens”.

“He needs as many matches as he can get. If I was Novak, along with Radek Stepanek and Andre Agassi I would get him to play every single week,” he said.

“It is not about getting his preparation to be perfect for the French Open, because that is not what he is looking for.

“He is aiming to get confidence and match wins so you have just got to put yourself in that situation week in week out as long as the elbow can take it.

“If the elbow can take it then play as many tournaments leading up to the French because it will help to get his rhythm, feel and confidence back.

“You can practice all you want and be brilliant in practice but match play is totally different.”