Nick Kyrgios lived to his billing as one of the most controversial characters in tennis as he took aim at a host of ATP stars during a colourful Instagram live chat with Andy Murray, including world number one Novak Djokovic.

The Australian has made a reputation for creating plenty of headlines on the court and in his post-match press conferences and he continued that trend as he joined Murray for a chat that left little to the imagination.

After confirming he has spent the tennis lockdown enhancing his knowledge on red wine, Kyrgios suggested Murray deserved to be recognised as the best player of the modern era, as he threw a few verbal jabs at Roger Federer, Novak Djokovic and his long-standing rival Rafael Nadal.

“Muz is better than the big three,” declared Kyrgios. “We all love Fed, Nadal and Djokovic, but Muz is the best, I believe that.

“People will take this to social media and say he has won this many Slams, but he was playing dodgeball on my returns the last two times we played and you were on them like a light and smashing them for winners.”

A jovial Kyrgios declared how handsome Murray was looking, much to the amusement of the somewhat embarrassed Scot, who questioned whether his pal had too many glasses of red wine as he continued to blast out a stream of feisty comments.

Next on his hit list was Team Europe’s Laver Cup players, as one of the stars of the Team World line-up offered up some spiky swipes at opposition players including Stefanos Tsitsipas and Alex Zverev. 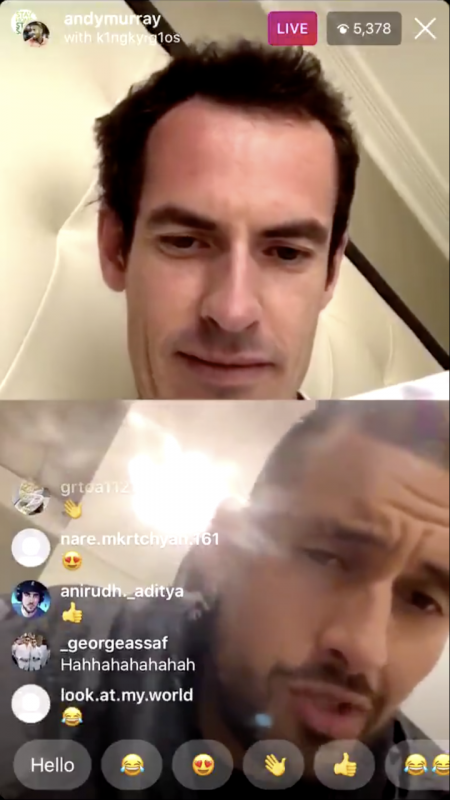 “It’s fun man,” he added. “We are they trying to beat some European guys who have no banter, don’t care for each other and act like they care for one week.

“Let’s be honest, Tsitsipas and Zverev hate each other. Then they are besties all of a sudden? I can’t stand it.

“Do you think me and Dominic Thiem would vibe. I’m more invested in a nice cocktail, but Thiem would be more interested in watching paint dry. It’s a different vibe.”

Kyrgios then urged Murray to join Team World when the Laver Cup returns in 2021 before the conversation was wrapped up before any more inflammatory comments could be muttered.