Jannik Sinner on fledgling rivalry with Carlos Alcaraz: ‘Great level of tennis, great attitude from both of us’ 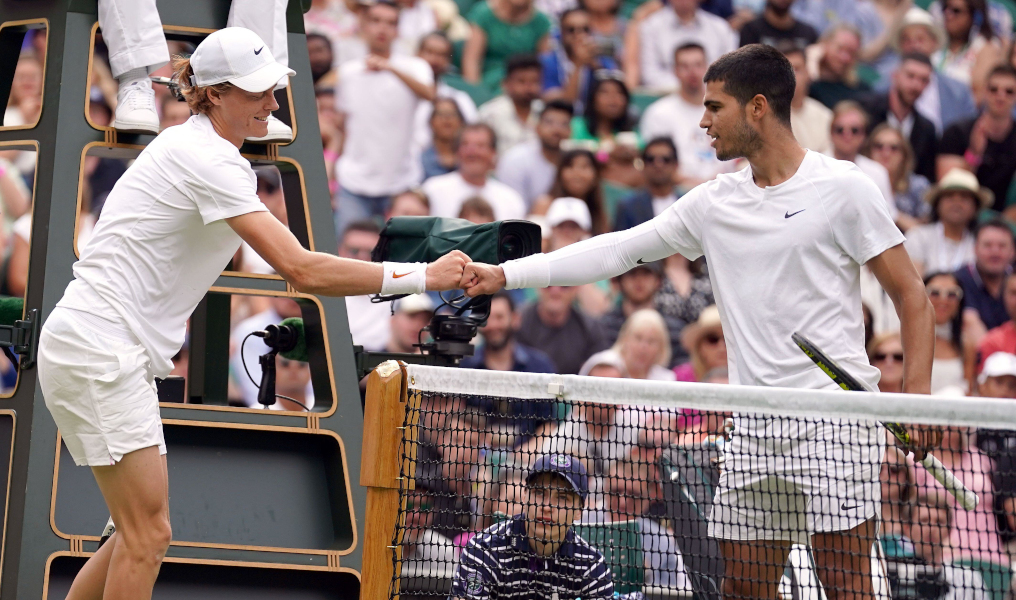 Jannik Sinner and Carlos Alcaraz are hopeful their maiden meeting at a Grand Slam will be the start of many blockbuster clashes following a thrilling fourth-round encounter at Wimbledon.

A breathless start by the world No 13 saw him grab the initiative and only briefly let it slip against the 19-year-old and his friend Alcaraz, who eventually found form but could never find the level that saw him make the quarter-finals at the US Open and Roland Garros during the past year.

Sinner wins the battle of youth.@janniksin becomes the youngest man to reach the quarter-finals at The Championships since 2014#Wimbledon | #CentreCourt100 pic.twitter.com/ProofLIX6u

“I think what we showed today, it’s a great level of tennis, great attitude from both of us,” Sinner said before talk turned to whether Centre Court had witnessed the beginning of a Rafael Nadal and Roger Federer-esque rivalry.

He added: “Hopefully this is going to be the case, but we never know. There are still so many other players who are playing incredible tennis.

“For sure we are the two youngest at the moment, so let’s see. I don’t know in the future what’s going to happen. Yeah, I think it’s just great for tennis to have also some new names, new players.”

Sinner revealed on Friday he spoke with Alcaraz over an ice bath after their third-round wins, which had represented the furthest either had reached at Wimbledon.

The two ATP Next Gen champions had both reached the last eight at two majors previously and despite the stakes being high, plenty of respect was on show throughout.

It was summed up when Alcaraz fist bumped his Italian rival after a slip at the net during the third set.

“Well, I mean I am always trying to be a good person first and then a good athlete. We have a good relationship,” the Spanish fifth seed explained.

“For sure he’s going to be in the top for many years. I hope to have a good rivalry with him. We hope to fight for the best tournaments in the world and the best moment in the world together.”

The clash between the youngsters occurred on the first official ‘middle Sunday’ at Wimbledon where matches were scheduled and also marked the day when 100 years of Centre Court was celebrated with an A-list cast of former champions.

It was both players’ first time playing at the 15,000-seater venue.

Sinner added: “It’s a special day. Many, many great champions are here or were here. It’s just great to see the crowd is fully packed.

“Obviously when you go out there and you see the crowd cheering and enjoying, that’s the most important. For me was a privilege today to go for the first time there in the Centre Court.

Jannik was the better player and he deserves it! 🤝🏻 Good luck for the rest of the tournament @janniksin! I’ll return home excited to work to improve and enjoy many more moments like this! 😀

“Yeah, hopefully also the next round will be there. It’s a very special feeling.”

Teenager Alcaraz went 40 minutes without winning a game in the opening stages and admitted he struggled to handle the occasion but believes he can return better for it in 2023.

He said: “I start really nervous. Playing on Centre Court is not easy for me. Jannik could handle it better than me, the nerves and the pressure, I’d say.

“But I felt really well here in Wimbledon. I got a lot of experience playing on grass. Now I’m thinking that I could be a great player on grass.

“Next year I hope to play some tournaments before here in Wimbledon to adapt my game, to get used to playing here on grass. But I would say I’m going to be a great player here.”