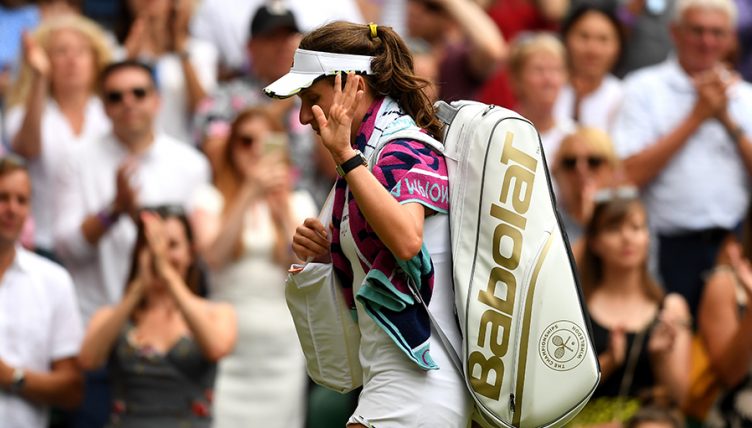 Johanna Konta’s Wimbledon dream is over for another year after Barbora Strycova came out on top of their quarter-final on Tuesday.

Konta reached the semi-finals two years ago and was hoping to do at least as well again, and she was looking strong in the previous rounds at SW19.

However, Konta was well below the standards she had set for herself in their last-eight clash, eventually sinking to an anticlimactic 6-7 (5-7), 1-6 defeat.

“It sounds crazy,” Strycova said of reaching her first ever Grand Slam semi-final.

“It’s happening but I cant really believe it. I am extremely happy and my voice is shaking because I can’t believe it.

“I felt like I was playing well and she was striking the ball quick and hard. I stuck to my game and tried to mix it a little bit. I felt better and better, turned it around.

“It was one of the best matches I played here. I haven’t been playing on Centre Court so it was a special moment.”

Serena Williams awaits for a place in the #Wimbledon final…@BaraStrycova is into her first ever Grand Slam semi-final after beating Johanna Konta pic.twitter.com/vHPxMvFwV7

Strycova will play Serena Williams in the semis on Thursday, but she insists she’s not daunted.

“It’s a great week to play her and a match I look forward to.”

Elina Svitolina will complete the women’s semi-finals line-up, after she overcame Karolina Muchova 7-5, 6-4 in the other quarter-final.

“It feels amazing. It is the first semi-final for me, and I actually didn’t expect it to happen here. It is exciting and I am looking forward to it already.

“I had to fight for every point, take my chances, and just try to get the extra ball over the net.”