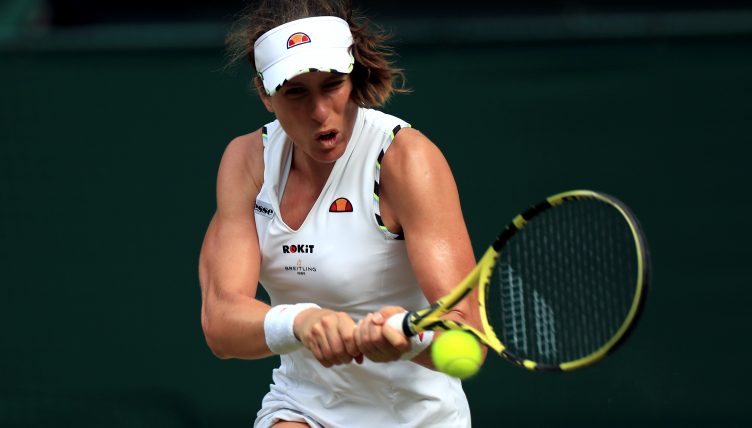 Johanna Konta fought back from a set and three games down to win 2-6, 7-6, 10-6 against Katie Boulter on the second day of the Battle of the Brits tournament in Roehampton.

British number one Konta, 14th in the world rankings, bounced back after her straight-sets defeat to Jodie Burrage on Monday with an impressive comeback victory.

Boulter, fresh off the back of her Progress Tour final triumph, took an early 4-1 lead in the first before going on to take the set comfortably.

The second appeared to be going the same way as the first, but Konta fought her way back from three games down to go 4-3 up in the second, eventually taking the set and forcing the deciding tie-break.

The 29-year-old then carried her form into the decider, powering her way to a 5-1 lead, although Boulter managed to close the gap to 7-4, it eventually finished 10-6 in favour of Konta.

The pair usually play alongside each other at events, but Konta said it was easy to put the camaraderie aside for the tournament.

Speaking after the match, Konta told the BBC: “I think you put that aside a little bit. Just last week we were just playing practice sets here.

“It’s not necessarily what it would feel like if we would be at a Grand Slam or at a WTA event.

“But I think more than anything it’s just to give both of us the chance to bring those competitive juices to the front, pretend we’re somewhere else and just bring some good tennis to the court.

“She started very well, but I felt like I was able to come to the party a bit as the match went on and I thought actually by the end we were playing some great tennis.

“I think it was similar to yesterday for me, these are my first three-quarter competitive matches since the beginning of March so it’s going to take time and I think, more than anything, I just gave myself a chance to start playing better.

“I thought in both matches I was in a good mindset, but especially today I thought I just kept staying there each point just to give myself the chance for my level to get better.”