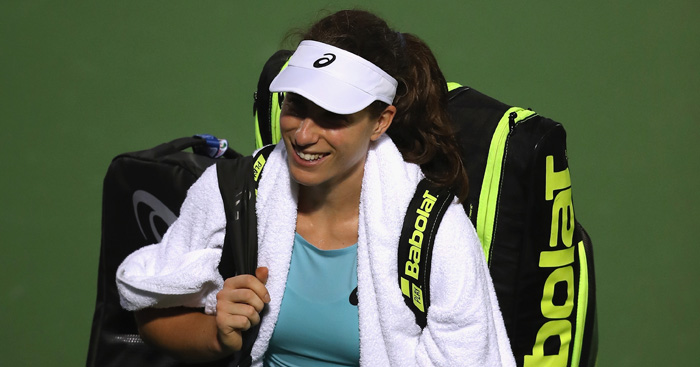 Johanna Konta has vowed to continue to search for her best form after suffering another disappointment in Dubai.

The British number one lost to Russia’s Kasatkina 4-6 7-6 (8/6) 6-2 in Dubai, throwing away a match point in the second set, meaning she has only reached one quarter-final since the Cincinnati open in August.

However, Konta, who has three singles titles to her name, was upbeat following the defeat, insisting that she did “a lot of good things” during the match.

Speaking at a post-game press conference, she said: “It would have been nice to have taken one of the match points, however that’s part of the game. I can really look back at this match… take the good things, because I did do a lot of good things, and learn from the things I can try to do better.”

The world number 12 denied the game quickly ran away from her, adding: “I fought the best that I could in that third set. Not to lie, I don’t feel amazing, at one point I was laughing, I did think we were playing two separate matches because she looked fresh as a daisy.

“So that was not a great feeling, but I did the best that I could today.”