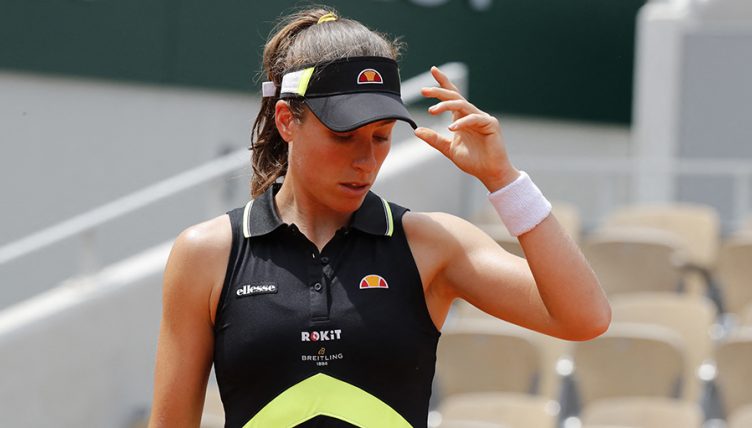 British number one Johanna Konta revealed she suffered from heart palpitations in her first-round defeat to Marie Bouzkova at the Lexington Open in Kentucky.

In just the second game of her 6-4 6-4 loss she appeared to be breathing heavily and needed a medical timeout as doctors checked her pulse and blood pressure.

She was able to return to court but lost her first match back on the WTA Tour since March.

Konta said it was the fourth time she had suffered the problem and it was a different ailment to the one that had seen her collapse at the US Open and Fed Cup in recent years.

“I’m fine, I sometimes have a heart palpitation and basically my heart rate shoots up for no reason,” she said. “We didn’t have a long point or I wasn’t gassing in anyway in terms of lungs.

“My heart rate goes up and it doesn’t go down, it stays there and it makes me light-headed and I just needed to see the doctor and physio to see where it was at, it was very, very high when they came out and then it is just a management thing.

“It is something that we are keeping an eye on, I’ve had to have the heart checks and there is nothing wrong, I am fit as a fiddle, it is one of those things that can happen and I am susceptible for it to happen and it took a while for it to settle down.

“This is the fourth time it has ever happened, the first time was in Birmingham in 2017, the second time was in Beijing in 2018 and the third time was in practice at home in London.

“I wouldn’t stay there is a massive common denominator, it has been under stressful situations, under no stress situations. We don’t know to be honest, it is one of those things you need to catch in the moment and record in the moment.

“I’ve had all the heart tests I could have possibly have and my heart is absolutely fine.