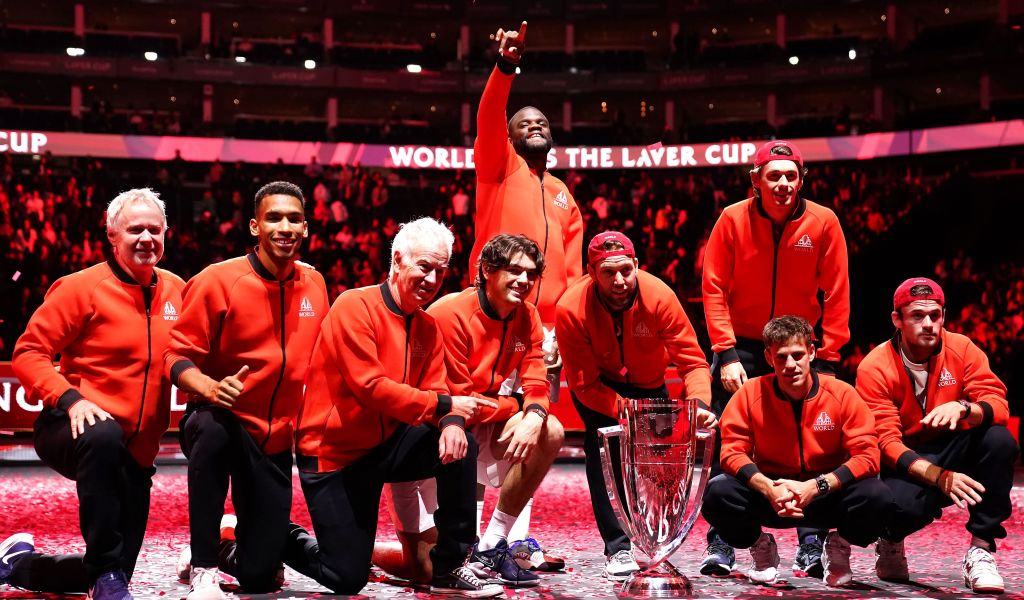 John McEnroe’s Team World scored a 13-8 victory with a match to spare as a result.

The global team dominated by North America sealed their maiden triumph in the competition after Team Europe won the first four editions.

Federer might have hoped to mark the end of his career by lifting the trophy in a tournament he helped create but instead the Swiss legend was left to congratulate Tiafoe and the rest of the Team World squad.

Federer played the last match of his all-time great career on Friday when he and Rafael Nadal were beaten by Tiafoe and Jack Sock in the doubles.

The 20-time Grand Slam champion’s tearful farewell was the tournament’s headline moment, but Federer stayed around to cheer on his Team Europe colleagues and help out where he could, including bringing Novak Djokovic water.

Despite the presence of Djokovic and former world No 1 Andy Murray on the Team Europe roster, it was a fitting changing of the guard moment with Tiafoe and Canadian rising star Auger-Aliassime powering Team World’s comeback from a 8-4 overnight deficit.

Tiafoe, 24, and Auger-Aliassime, 22, are part of a new generation of young stars expected to stage centre-stage now Federer has retired, with Nadal and Murray also in the twilight of their careers likely leaving Djokovic to fend off the young Turks on his own.

Team World were dragged back into contention by a double-win from Auger-Aliassime.

Auger-Aliassime first handed Djokovic his first singles defeat since May as the Canadian youngster powered to a 6-3, 7-6 (7/3) victory.

Djokovic had defeated Tiafoe in straight sets to put Europe on top.

The Serb had chance to maintain his strong return to action against Auger-Aliassime when he broke in the opening game of the first set.

However, Auger-Aliassime hit back with a pair of breaks to leave Djokovic on the ropes.

The second set went to a tie-break that Auger-Aliassime claimed as he overpowered Djokovic with some searing groundstrokes.

It was the first time Djokovic had been defeated in a competetive match since losing to Nadal in the French Open quarter-finals.

“It’s one of the best performances of my career. I’ve been close a few times against these great champions, so it feels to great to get a win like this,” Auger-Aliassime said.

Auger-Aliassime’s first ever win over Djokovic was especially impressive as he had already partnered Sock to a 2-6, 6-3, 10/8 doubles victory over Matteo Berrettini and Murray earlier on Sunday.

Auger-Aliassime’s heroics set the stage for Tiafoe who didn’t disappoint.

Tsitsipas blazed through the first set in just 21 minutes, but the Greek’s fast start was halted by the defiant Tiafoe.

Tsitsipas squandered four match points in the second set tie-break as Tiafoe showed why he reached this year’s US Open semi-finals, staving off defeat in nerveless fashion.

On his third set point, Tiafoe delivered a perfectly placed volley to trigger a first to 10 points ‘Laver Breaker’.

Tiafoe tipped the match in his favour with an astonishing cross-court winner after sprinting to the net to reach the disbelieving Tsitsipas’s drop-shot.

It was a moment of magic that recalled Federer at his finest and the Swiss great couldn’t resist a wry grin as he soaked up his last taste of big-time tennis before riding into the sunset.