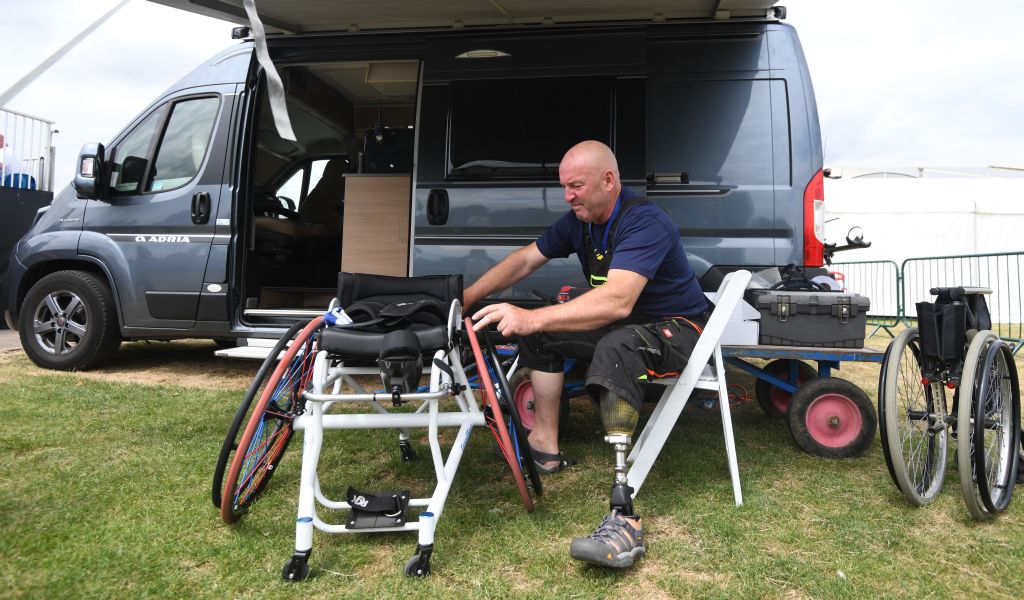 Have you ever wondered who fixes the wheelchairs when tennis stars lose their most vital piece of equipment during a match? Meet James Ascroft.

Whether it’s a loose wheel nut, a seat that needs adjusting, or even something as extreme as a chair split in two, Ascroft is the man often on hand as wheelchair tennis’ very own one-man repair shop at the LTA’s British Open Wheelchair Championships in Nottingham.

Though not Ascroft’s day job, he can regularly be found court side, tending to all manner of issues.

“I’m chief wheelchair fiddler,” joked Ascroft. “Or whatever they call me, that’s my official title!

“I’m just an odd job, it’s not official. It’s nice that we quite often take a situation that wasn’t going the right way and turned it round to the right way.

“I’ve done that at quite a few competitions now, and it’s quite nice when I can do that.”

Ascroft recently went above and beyond for South African player Donald Ramphadi, who found his wheelchair in two pieces following a match at Wimbledon, putting his participation in the British Open in doubt.

That was no obstacle for Ascroft, however, who managed to find a solution and get the 29-year-old back out on court with the help of the Spondon Gia Engineering workshop in Nottingham.

“I get a call saying this lad’s chair is broken,” said Ascroft. “I didn’t know any more than that. Quite often it’s when they’ve come through the airlines, that’s when they’ve broken.

“The chair turned up in two bits – it’s never good when you get a wheelchair in two parts of your hands. Good for packing, not brilliant for playing with!

“Between lots of phone calls we found this motorbike engineering firm. There was more chance of them saying no than yes but I bribed them with some bacon butties and we went down there early the following morning.

“They were absolutely fantastic, they couldn’t have done enough. I was like a kid in a sweet shop – I’m a biker myself. It was welding heaven.

“We managed to get it glued together but we still didn’t know whether it would actually work.

“We get back here with our shiny new toy and stuck all the rest of the bits on it, and Donald got in it, it was thumbs up.”

Ramphadi got back on court to take on Great Britain’s Andy Lapthorne, a clash which ended in defeat for the South African star.

Yet the South Afrcian would enjoy success in the doubles event, clinching the title in Nottingham with his partner Koji Sugeno and it was a sweet reward for Ascroft, who himself lost a leg in a motorcycle accident 15 years ago but admits he is not as skilled on court as the players to whom he tends.

“It probably helps a little bit [that he is also disabled.] I’ve only just got half a toenail missing as quite a lot of them remind me of!

“I have an affinity sometimes and a bit of empathy with what they’re having to contend with.”

Ascroft offers a vital, and often less acknowledged, service that keeps many players running but admits he is wary of making too many adjustments despite the requests of some players.

“I don’t try and change too many parameters. You don’t want to be saying to someone do this, do that before a match because it could be a game changer. We firefight and get things ready.

“We’re not going to start welding a chair in the middle of a match but if it’s chucking a nut and bolt on it, we can get it working again.”