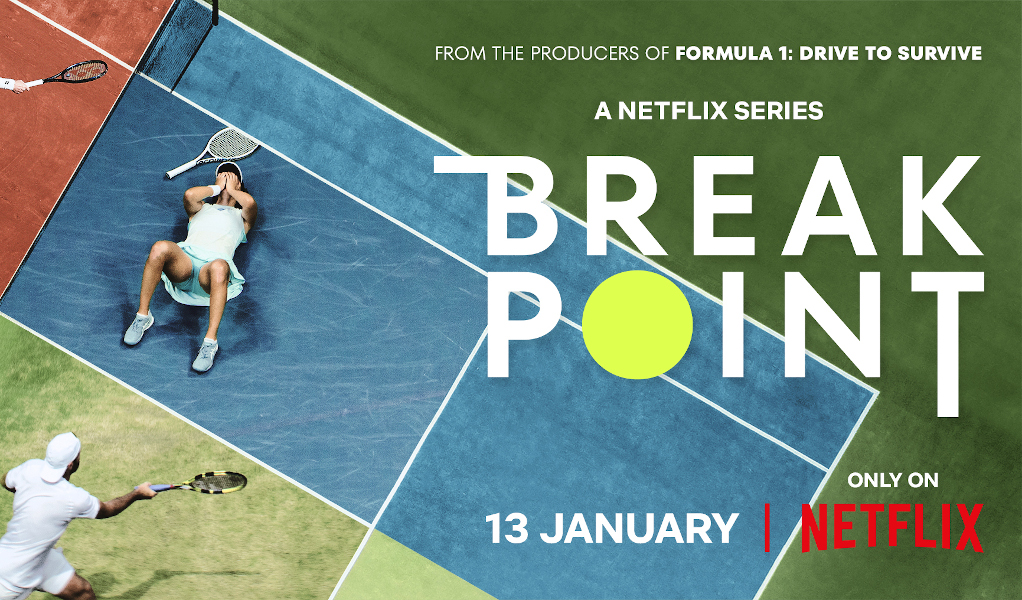 The long-awaited Netflix tennis series Break Point has finally landed and we give you all the ins and outs of the docuseries that is expected to take the sport to a new audience.

What is the name of Netflix’s tennis series?

In case you missed the headline and the intro blurb, here you go again. The Netflix tennis series is called Break Point.

The figurative meaning of break point is, according to the Cambridge Dictionary, “the stage at which your control over yourself or a situation is lost.”

Oxford states it is: “The time when problems become so great that a person, an organisation or a system can no longer deal with them.”

When and where was Break Point filmed?

The ATP and WTA Tours as well as the four Grand Slams – Australian Open, French Open, Wimbledon and US Open – announced in January 2022 that they signed an agreement with American subscription video on-demand over-the-top streaming service and production company Netflix for a “groundbreaking tennis documentary series”.

Filming effectively kicked off at the 2022 Australian Open and they also followed players around at the Indian Wells Masters (March 2022), Madrid Open (April-May 2022), French Open (May-June 2022) and US Open (August-September 2022) as well as one or two other tournaments.

When was Break Point released?

The big red carpet launch took place in Australia on Friday January 13 and the series “dropped” in the rest of the world on the same day.

How many episodes does Break Point have?

The docuseries consists of 10 episodes in total, but for now you can only watch half of them as only five were released on January 13. Episodes 6 to 10 are set for release in June 2023.

How can you watch Break Point?

It is exclusively available on Netflix. Once you have logged into your profile, simply type Break Point into the search bar and it will be the first one that pops up.

Which players feature in the series?

It Netflix crew follows Nick Kyrgios around at the Australian Open. If you are unfamiliar with Kyrgios, he is one of the sport’s most-outspoken players and has that X-factor that puts bums on seats at tennis matches.

Former world No 7 and world No 43 Ajla Tomljanović (who were dating at the time of filming) are the main stars of episode two as they look to win their maiden Grand Slams.

The Indian Wells Masters marks the start of the American swing and forms part of the “Sunshine Double” and Maria Sakkari and Taylor Fritz get their moments in the sun. As per Netflix, Sakkari “has a chance to overcome her demons and bring her A game” and Fritz is looking to “become the first American in over two decades to win his home state’s most iconic tournament”.

Paula Badosa is ranked No 2 in the world and she is eyeing a home title at the Madrid Open while Tunisian trailblazer and world No 10 Ons Jabeur is out to become first Arab and African player to win a major tournament.

Rafael Nadal is known as King of Clay as he has dominated at Roland Garros, but Canadian prodigy Félix Auger-Aliassime is looking to make the step up while Casper Ruud is also eyeing Grand Slam success.

A word from those who were part of filming…

“I think both James [Gay-Rees] and I were drawn to tennis as we had come close to doing a project with Andre Agassi a few years ago,” executive producer Paul Martin said.

“Spending time with Andre and hearing him talk about the physical and mental demands of the game really lit something in us. Although that project fell through, we always knew at some point we wanted to dive into the world of tennis and show people a side of the sport they didn’t know existed.”

READ MORE: Netflix tennis series Break Point is here and this is what you can expect