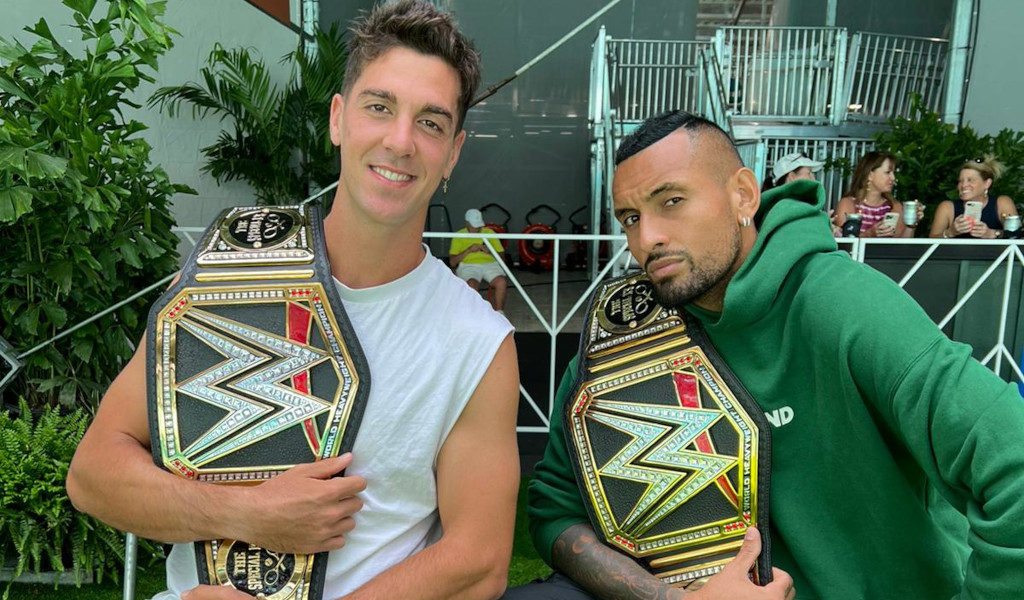 The first homegrown Aussie pairing to win the Australian Open men’s doubles since 1997, Nick Kyrgios and Thanasi Kokkinakis, have been honoured by the WWE.

The sports entertainment juggernaut has made it a tradition to hand title belts to winners on major championships across a number of different sports including the NBA, WNBA, NFL, various motorsports and even golf.

That the Special Ks are on the radar of the WWE affirms their rise as two of the sport’s most compelling characters.

Kyrgios and Kokkinakis were handed specially made WWE title belts with custom side-plates emblazoned with the ‘Special Ks’.

A press release from the WWE reads: “The first all-Australian duo to win the home slam since 1997 can now celebrate in style!

“Tennis stars Nick Kyrgios and Thanasi Kokkinakis won the 2022 Australian Open men’s double title this past January, and they now have the WWE Championship hardware to back it up.

“WWE wishes the duo the best of luck as they continue to compete at this year’s Miami Open.”

Kyrgios and Kokkinakis might even fancy a run in the WWE considering their tag team division is a little thin on the ground. Who knows they might even be able to get their names on the Raw or Smackdown tag team belts.

The WWE’s past association with the sport of tennis is largely limited to the antics of Jim Cornette, who was known to engage in a spot of racket abuse here or there.

WWE love to bring in sportsmen and women and famous entertainers as evidenced by the card for WrestleMania 38 which features Jackass star Johnny Knoxville and social media influencer turned combat sportsman Logan Paul.

The Special Ks will take on the pairing of American John Isner and Pole Hubert Hurkacz in the semi-finals of the Miami Open Men’s Doubles during the Thursday afternoon programme.

After a great start to their season the Australian Open champions are 7-1 for 2022 so far.