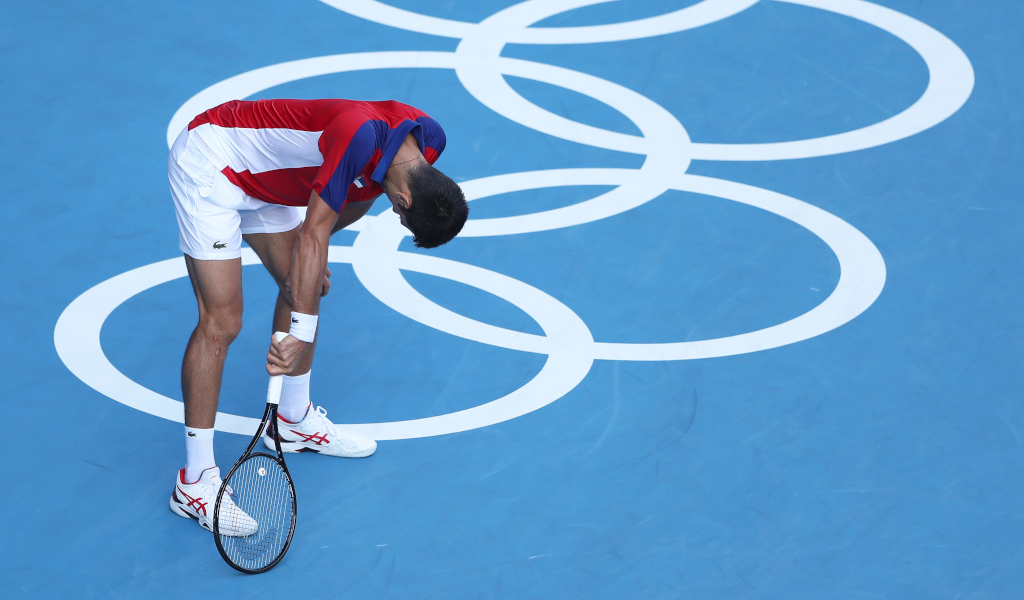 Cue the latest inquest into the most polarising sporting icons we have ever seen.

As Novak Djokovic walked away from the Tokyo Olympics without even a bronze medal to soothe his wounded pride, the manner of his defeat against Pablo Carreno Busta left many questioning whether this great winner had again forgotten how to lose gracefully.

The clip of the world No 1 angrily throwing his racket into the stands and narrowly missing the few sitting inside a near-empty stadium instantly went viral among the tennis community, as did his angry lashing of the Olympic rings printed on the net as he lost control of his emotions in alarming fashion.

Such has been the imperious form shown by Djokovic in 2021 that he has not had to swallow the bitter taste of defeat too often of late and that may explain why he couldn’t cope with a semi-final loss against Alexander Zverev on Friday and a 6-4, 6-7 (6-8), 6-3 against Carreno Busta a day later.

Arguably the most controversial decision made by Djokovic on a crazy day saw him pull out of the mixed doubles bronze medal match with Nina Stojanovic, denying his partner a chance to claim a medal in what many viewed as a reaction to his back-to-back defeat in singles matches.

Djokovic later suggested he pulled out of the mixed doubles due to being “physically and mentally exhausted” and given that Simone Biles was hailed as a hero for pulling out of her gymnastics events at the Tokyo Olympics after citing mental health issues, criticism of the world No 1’s decision to withdraw from his match needs to be tempered with some level of caution.

Yet former British No 1 Annabel Croft suggested Djokovic’s surly attitude on the court in Tokyo did not leave a positive impression for a player who headed to the Olympics striving to add a fourth leg to a potential ‘Golden Slam’ after his victories in the Australian Open, French Open and at Wimbledon this year.

“It was an interesting scenario in that final set,” declared Eurosport and discovery+ tennis expert Croft.

“He missed a volley, he’s down a break already and the frustration just boiled over. He smashed his racket up against the net post, gets a warning. He does a good job of completely annihilating that racquet! It’s almost splintered!

“Then chucks the racket into the crowd, well there’s not a crowd but somebody standing quite close by. It wasn’t in frustration.

“Carreno Busta hadn’t even seen him do it but his team behind him were asking him why he didn’t get a warning for putting that racket into the stands. I think it was almost a little bit of needle bearing in mind what I’ve just said about the history between these two.

“He was clearly trying to get the umpire to give him another warning. Who knows whether that would have meant disqualification again or what have you.

“So it was quite an interesting moment and showed a lot of tension between the two of them and unfortunately for Djokovic he couldn’t contain his emotions out there and it was Carreno Busta who came through.”

Croft also questioned Djokovic’s decision to pull out of the mixed doubled and hand the Australian pair of Ashleigh Barty and John Peers the bronze medal.

“I’m really surprised,” she added. “I mean that was a very brutal tennis match, he was on court for nearly three hours, but there wasn’t any particular sign that there was any issue there.

“Obviously his partner [Nina] Stojanovic, this is heart-breaking for her because she would have done anything to play this match and potentially for her own personal glory. Going for a medal would have been something really special for her. I would just say it’s a heartbreak for his partner.”

The social media debate on Djokovic’s tantrums were divided very much down familiar lines, with the Serbian’s fanatical supporters refusing to allow any negative comments about their hero to pass, while fans of Roger Federer and Rafael Nadal simply posted images of their icons with gold medals from previous Olympic triumphs.

Djokovic has vowed to return for another shot at Olympic glory at Paris 2024 and maybe then he will have the last laugh, yet this was another moment that highlighted the greatest winners in sport reminded us that he simply doesn’t know how to accept defeat.