Novak Djokovic steps up to put Team Europe back on track 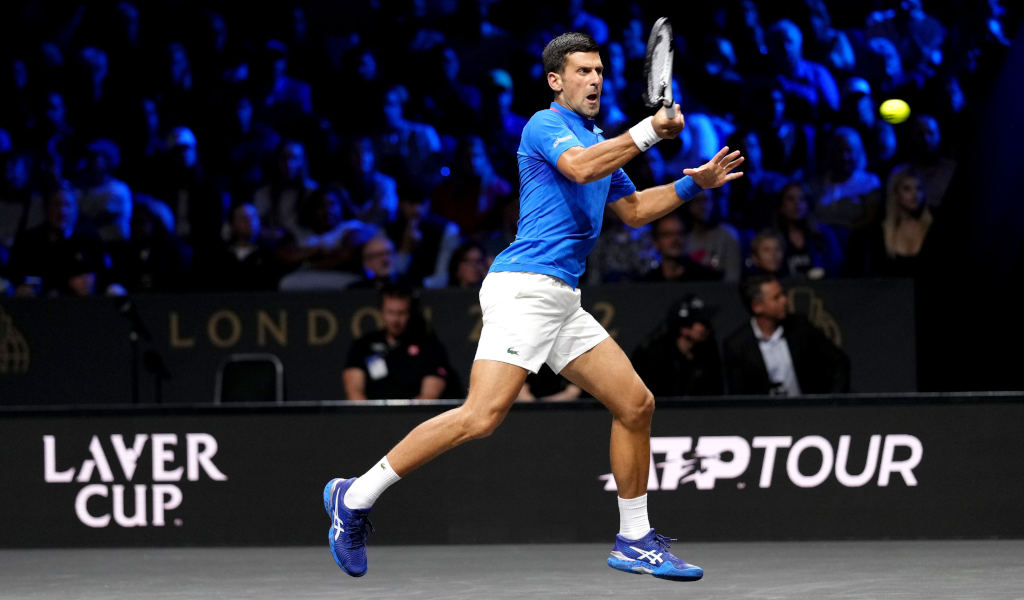 Novak Djokovic didn’t miss a beat as he made an impressive return after two months out of action in the Laver Cup.

The Team Europe star thrashed Team World’s Frances Tiafoe 6-1, 6-3 with Roger Federer cheering him on at the Laver Cup on Saturday.

Djokovic looked as sharp as ever despite not playing since winning the seventh Wimbledon crown of his remarkable career in July.

Djokovic returned to the court with Berrettini for a doubles match against Sock and Alex de Minaur on Saturday evening.

He was quickly back into his old routine against US Open semi-finalist Tiafoe.

Djokovic broke in the fourth game and again in the sixth to take the opening set in just 23 minutes.

The record-breaking rankings king went for the kill as he landed yet another break in the first game of the second set before cruising to the finish line with Federer waiting to congratulate him at courtside.

Federer bid an emotional farewell to tennis late on Friday night when the 20-time Grand Slam champion and doubles partner for the night Rafael Nadal were beaten by Tiafoe and Jack Sock.

The 41-year-old announced earlier this month that he would retire after the Laver Cup after he was unable to overcome the knee problems that had kept him on the sidelines since Wimbledon in 2021.

Federer’s fitness issues meant he was only able to muster playing one doubles match.

Matteo Berrettini was called into the Team Europe squad to replace the Swiss legend after the last game of his incredible career. Berrettini proved a capable deputy as he defeated Felix Auger-Aliassime 7-6 (13/11), 4-6, 10/7 in Saturday’s first game.

Berrettini, who finished as the 2021 Wimbledon runner-up, had to dig deep to hold off a spirited challenge from Auger-Aliassime, a 22-year-old Canadian rising star.

On the first day of his life after tennis, Federer could have been forgiven for following Nadal’s example and heading off for a well-earned rest.

But Federer showed his passion for tennis is unlikely to fade anytime soon as he sat courtside to support Berrettini with the rest of the Team Europe squad despite the post-midnight finish to his emotional finale.

Federer, who was involved in setting up the Ryder Cup-style Laver tournament, had said “we can all party together” as the 17,500-crowd raised the roof with their acclaim for one of the sport’s all-time greats after his final match.

Auger-Aliassime was unfazed by losing that 75-minute opening set and levelled the match in the second set but Berrettini closed out the victory in the first to 10 points ‘Laver Breaker’ which settles matches that aren’t won after two sets.

Norrie was playing because Nadal had opted to pull out of the rest of the tournament after the Federer doubles match for what organisers said were “personal reasons”.