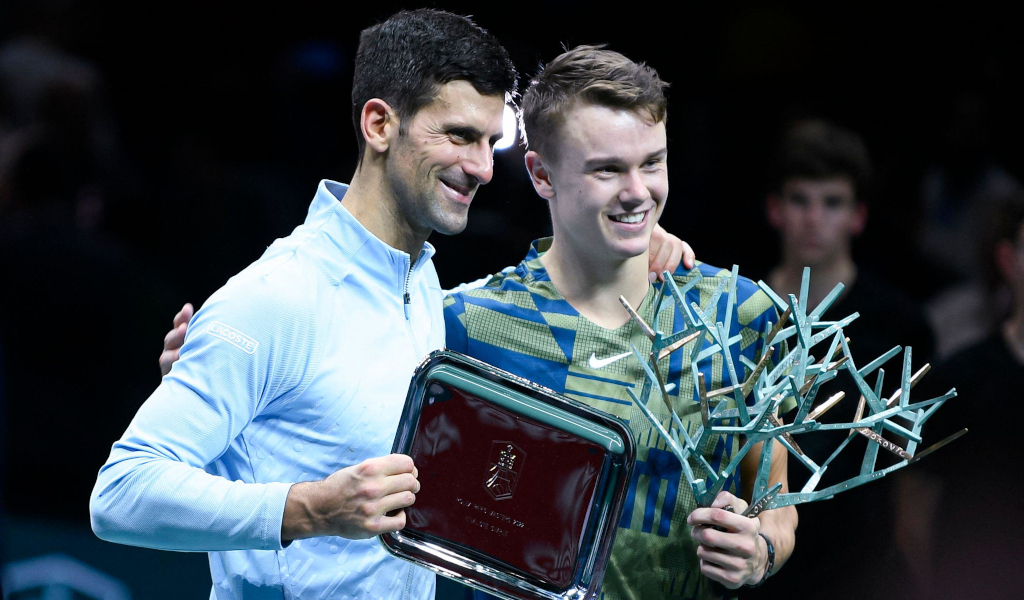 It’s not just age that Carlos Alcaraz and Holger Rune have in common as Novak Djokovic has highlighted why the two teenagers are so “impressive”.

Djokovic has lost against both 19-year-olds this season as Rune won the biggest title of his career when he upset the defending champion in Sunday’s Paris Masters final.

Back in May, Alcaraz also claimed a three-set win over Djokovic in the semi-final of the Madrid Open before going on to win the title.

Rune’s maiden ATP Masters 1000 win saw him rise to a career-high No 10 in the ATP Rankings while Alcaraz now sits at No 1 after winning five titles, including the US Open.

Following his defeat to Rune in Paris-Bercy, Djokovic was asked about their main difference as opponents, but he came up with a lot of similarities.

“They are similar in terms of physicality. I think they are both really fit. They train very hard. They are very dedicated guys. They defend, both of them, extremely well,” the former world No 1 said.

“Rune has [a] better backhand. Alcaraz has [a] better forehand. But they are both improving on those shots that maybe are not as good as maybe other shot.

“But they, you know, when I say, you know, is ‘not as good,’ meaning it’s not huge difference. I mean, they have great shots. I mean, great forehand from Rune or great backhand from Alcaraz.

“They are very complete players for 19-year-olds. It’s quite impressive. Also their energy on the court, just wanting, motivating themselves and wanting to do well and staying mentally present, it’s impressive.”

Djokovic won the opening set and also held a 3-1 advantage in the deciding set, but it was Rune who emerged victorious.

The 21-time Grand Slam says the Dane has the potential to “reach great heights”.

“I think he does have a lot of elements that remind me of myself when I was his age. Just a very competitive spirit, very confident, going for the shots. Backhand, very solid backhand, great backhand. Dropshots, good return, mixing things up, coming to the net,” he said.

“He has improved a lot. We played last year in US Open. Since then his level is higher. Two, three levels higher, for sure. So I’m sure that he’s going to keep going. He’s got, you know, big objectives and goals. Understandably so, because he’s really a player that has potential to reach great heights.”