As the long-time coach of Serena Williams, Patrick Mouratoglou has emerged as one of the most prominent and colourful figures in tennis and now he has opened up on his insecurities and anxiety in his youth.

In a passionate social media post, the highly respected coach gave an insight into his own personal journey, as he suggested he his insecurities have been one of the reasons why he believes he has made a huge success of his life.

“As a kid, having panic attacks at night, anxiety, always being sick, and totally unable to socialize with others, I could never envision that I would be speaking to and motivating thousands of people around the world,” he wrote. “This extreme weakness in my life became one of my biggest strengths.

“Because I wasn’t able to socialize, I observed and listened to others all the time trying to figure out their emotions.

“This allowed me to understand how people think and why they act certain ways, regardless of what they say. This skill helps me understand the needs of my players and enables me to feel how they really feel. My biggest weakness became my biggest strength. 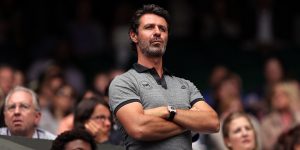 “Last year, I got the opportunity to share key life lessons in my own episode of The Playbook, a Netflix docuseries produced by LeBron James.

“Here are some other lessons that can apply in your coaching life, athlete life, or in your day-to-day life:

“Emotions are the worst advisor: avoid taking decisions when you are emotional, no matter if they are positive or negative emotions. Your brain knows what’s best for you. Give it time to see clearly, past all emotions.”

Mouratoglou went on to offer advice to his followers, as he suggested he has never shied away from telling some home truths to the players he has worked with.

“Never be afraid to get fired: Tell your player what you have to tell him in order to help him grow,” he added.

“Sometimes it might feel risky as you don’t know how he will react but that is the only way to keep growing. Do not think about the consequences it could produce on your position but look only at whether it will help or not your player. If you let the fear of being fired dictate your decisions, you stop being a coach.

“Mistakes are inevitable, but don’t let them define you: assume and learn from your mistakes, but don’t hold on to them. Mistakes are never definitive, just a wrong stop on the way to your success. Recognize it as what it is, don’t let that hurt you, and just adjust your strategy for the future.

“A good lie can become the truth: fake it until you feel it. It may not be true right now, but if you believe in it, it will happen. As a coach, I never lie but I sometimes anticipate something that will happen.

“Let them know they’re not alone: feeling that someone believes in you and supports you no matter what is one of the most empowering things in the world. Which lesson speaks to you the most?”