Rafael Nadal: I’m not currently good enough to be world number one 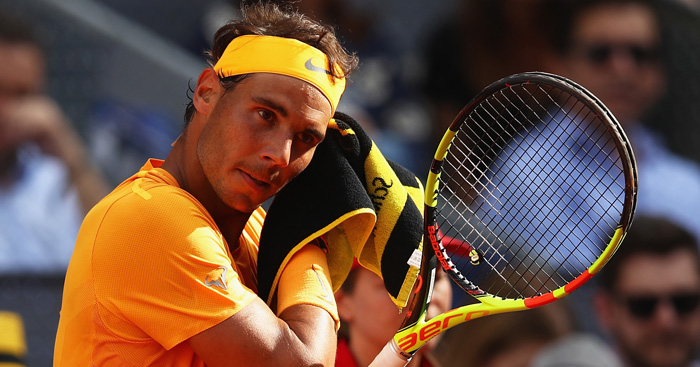 Rafael Nadal was in philosophical mood after losing his world number one status.

The Spaniard, who has been in stunning form of late, was dumped out of the Madrid Open in the quarter-finals by Dominic Thiem – a result that will see Roger Federer restored to the top of the rankings.

However, Nadal believes his injury absence at the start of the year means he cannot realistically expect to be world number one now, though he has vowed to be in serious contention at the end of the year.

“I think from Shanghai till Monte-Carlo, I hadn’t finished a single tournament,” Nadal said. “We’re talking about a lot of months that I gave up.

“If we were talking about the ranking of one year, if I played really good in one period of the year, which I’ve done, let’s be clear, I have been playing really good recently.

“Last year I made it to the finals in every single tournament. This year till now I had only one or two tournaments that I had played. This is the reality of this year.

“Five months without playing in a tournament means that I cannot be No. 1. I’m not even thinking about that. I’m not going to keep the number one today. At the end of the year we will see what happens.

“But I think from January till Monte-Carlo I played zero tournaments. These are three months or more given away. This is a lot of months given away to the other players.

“Having said this, I think I placed myself in a good position more or less. I am number three in the race of the year, which is the most important thing.

“I still have two good weeks on clay, and then I’ll keep on moving forward. This is the reality.

“Of course I prefer to be number one than two, and number three than five. I have said this a million times.

“I lost the number one before, but what makes me happy is I feel fit, can compete with possibilities every single week. This is my final goal: to be happy. That’s what I’m working on.”