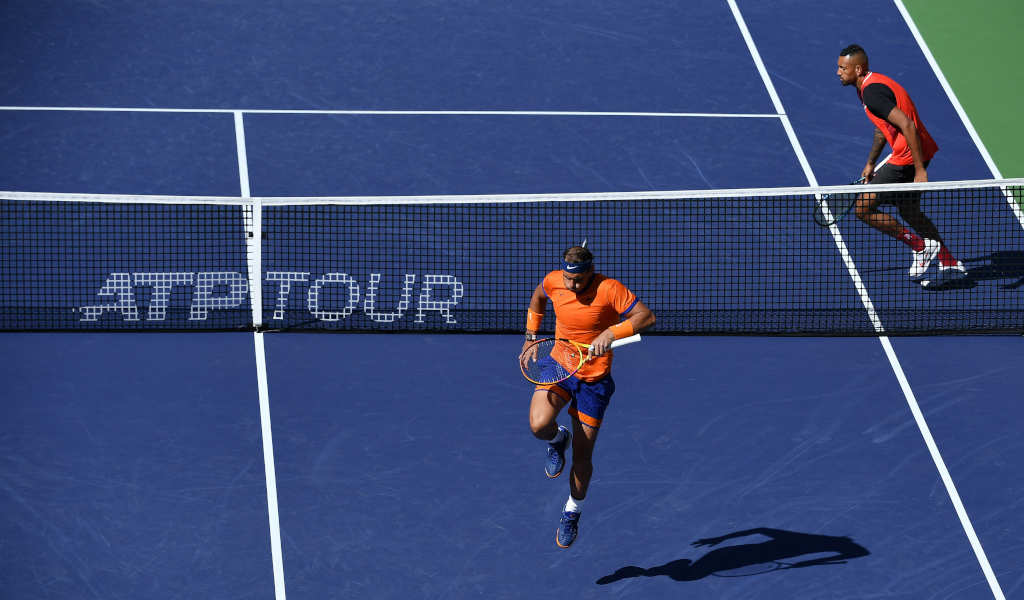 Rafael Nadal claimed a 7-6 (7/0), 5-7, 6-4 victory over Nick Kyrgios in the quarter-finals of the Indian Wells WTA and ATP Masters on Thursday.

The Australian was left fuming as a rowdy crowd got under his skin.

However, Nadal was his usual unflappable self and victory seemed inevitable despite a valiant effort from a fired-up Kyrgios.

19 and counting 👏@RafaelNadal remains unbeaten this year and defeats Kyrgios to reach his 76th Masters 1000 semi-final of his career!#IndianWells pic.twitter.com/GelYj9S44L

Kyrgios surrendered the first set on a penalty point and even had a testy exchange with actor Ben Stiller.

When it was all said and done Kyrgios flung his racket once more in disgust and sent a ball boy scurrying to get out of the way of the projectile.

Nadal admitted that he got lucky at times playing against a crafty opponent mixing up his serves.

“I put the racquet there, and then I played a good point, and then he make mistake on the break point,” Nadal said.

“I feel lucky to win that set because returning with 5-4 against Nick, the chances to win that set are, let’s say, 10%, maybe less. But it happened. I played some good points there.”

“That one hit pretty hard,” Kyrgios said. “I felt like, honestly, I was the one to end the streak. I felt like I was playing well. I felt like I did everything right in the first set that I planned to do.

“I mean, he’s too good, I guess. He played a few points well and he got out of it and that’s what he does. That’s what makes him great.”

Kyrgios insisted that he wasn’t hindered by his emotional response to the crowd — and his perception that umpire Carlos Bernardes wasn’t doing enough to control the disruptive spectators.

“It was an amazing atmosphere,” said Kyrgios. “I was focused. Just because I have an outburst doesn’t mean I’m not focused.”

Nadal, who hasn’t held back in his criticism of Kyrgios in the past, agreed.

“Nick is one of the most talented players on the tour without a doubt,” Nadal said. “When he’s playing with motivation and passion he’s one of the players that can damage your game and win against anyone.”