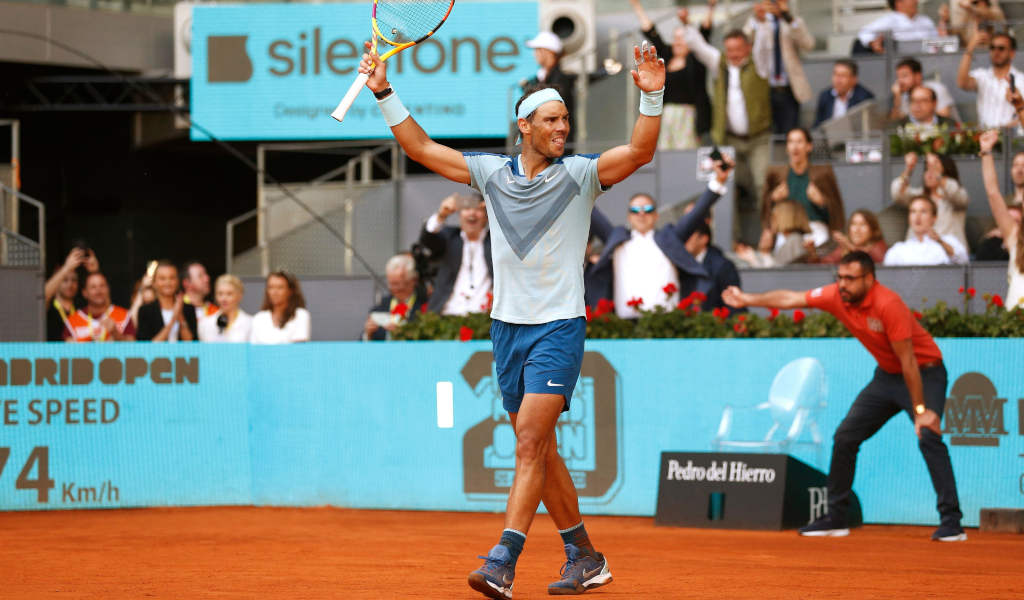 Rafael Nadal channeled the never say die spirit of Real Madrid as he saved four match points to ensure he progressed from an epic battle at his home Masters event against David Goffin.

Less than 24 hours after Real had beaten Manchester City in the semi-finals of the Champions League from a seemingly impossible position, Nadal mounted his own extraordinary recovery to beat Goffin 6-3 5-7 7-6 (9).

Nadal, playing his first tournament in six weeks after suffering a stress fracture of a rib at Indian Wells in March, saved four match points before conquering Goffin on the fourth of his own.

The 35-year-old will play Carlos Alcaraz in the quarter-final, his fellow Spaniard progressing with a 6-4 6-7 (4) 6-3 victory over Great Britain’s Cameron Norrie.

“It was an unforgettable night,” said Nadal – who had been in the stands at the Bernabeu to see Real beat City 3-1 and set up a final date with Liverpool – in his post-match press conference.

“The spirit that the Real Madrid team has is just incredible.

“For me today, in some ways it has been an inspiration in the way I have been fighting all my tennis career.

“I know how hard it is to lose this way so I feel sorry for them (City). But somehow for us, the supporters of Real Madrid, it was an incredible night.”

Nadal had looked on course for a comfortable victory before Goffin, who saved two match points in the second set, won four straight games from 3-5 down.

He saved two of Goffin’s four match points with drop shots, and a third when the Belgian netted a short forehand from an attacking posit

“It was an unforgettable night. The spirit that the Real Madrid team has is just incredible,” Nadal said after his victory. “For me today, in some ways it has been an inspiration in the way I have been fighting all my tennis career.

“Honestly, it was a very tough match. I think I played at a very high level. But at the same time I am not completely happy because I have to finish the match in straight sets, without a doubt.”

Nadal took the positives from the epic clash as he suggested his extended time on court could only do him good in the long run.

“Three hours and 10 [minutes] on court, that helps to increase my physical performance,” Nadal added. “A very important victory, saving match points. That’s confidence, that gives me the chance to keep going. I need matches and I need a day like to day to be fitter sooner.”

Nadal made a shaky start to the match but took the first set and looked on course to claim the second as well but he let a 5-3 lead slip as the Belgian rattled off four games in a row to force a decider.

That final set appeared destined for a tiebreak from the outset with neither man giving an inch.

Nadal did his bit to set up a blockbuster quarterfinal against Carlos Alcaraz.

Alcaraz defeated Cameron Norrie in the match that immediately followed on centre court in Madrid.

The teenage sensation also had to fight through a three-set battle against fellow top 20 player Cameron Norrie to reach the last eight.

Nadal has beaten Alcaraz in their two previous meetings at ATP Tour level.