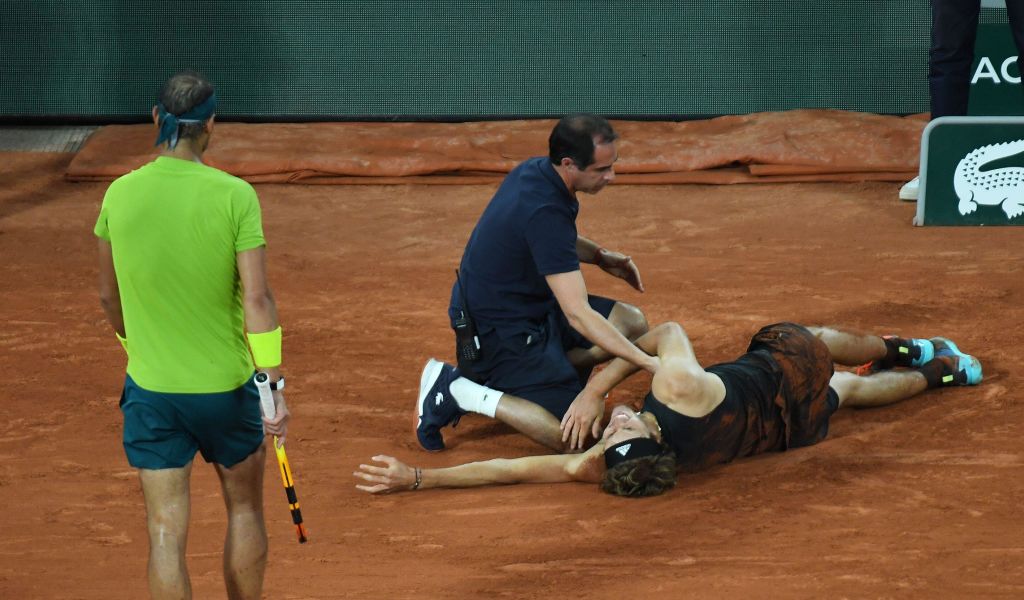 Rafael Nadal admitted the shine had been taken off reaching another French Open final by the horrific injury suffered by opponent Alexander Zverev.

Nadal and world number three Zverev had been battling for more than three hours when, at the end of the second set, the German slipped to the ground with his ankle twisting underneath him.

Zverev screamed in pain as medics rushed on to the court while Nadal raced around the net to comfort his stricken opponent.

The tearful 25-year-old was taken off court in a wheelchair, and Nadal sat with him while he underwent checks before he re-emerged five minutes later on crutches to confirm he could not continue.

Nadal, who had won the first set on a tie-break and had just levelled at 6-6 in the second, said: “Of course it’s not easy to talk after what happened. The only thing that I can say is I hope he’s not too bad.

“Hopefully it’s just the normal thing when you turn your ankle, and hopefully is nothing broken. That’s what everybody hopes.

“It had been a very, very tough match. I think he started the match playing amazing. I know how much it means to him, to fight to win his first grand slam.

“We are colleagues, we have been practicing together a lot of times. And to see a colleague like this, even if for me it’s a dream be in the final of Roland Garros, of course that way is not the way that we want it to be. If you are human, you should feel very sorry for a colleague.

“I was there in the small room with Sascha (Zverev) before we came back out. To see him crying, it is a very tough moment.”

It had been a pulsating semi-final right up until its premature ending.

On his 36th birthday Nadal, whose serve was broken in the very first game, was behind the eight ball for most of the opening set.

Having clawed the break back he found himself facing four set points at 6-2 down in the tie-break but somehow hit back, including one improbable backhand get followed by an outrageous forehand winner, to snatch it 10-8 after 92 gruelling minutes.

With three hours and three minutes on the clock, Nadal was serving at 5-6, 40-30 when Zverev’s footing gave way.

The crowd on Philippe-Chatrier – fiercely pro-Nadal as usual – rose to salute the third seed as his latest bid for a maiden grand slam title came to a devastating end.

“When you are injured like Sascha is now, a piece of your life is taken away from you for a certain time because you can’t walk, you can’t be on the tennis court.

“But there are much worse situations, much more serious problems in the world today.”

It was not the way he wanted it to happen, of course, but despite his own ongoing injury problems Nadal remains on track for Roland Garros title number 14 and a 22nd grand slam win.