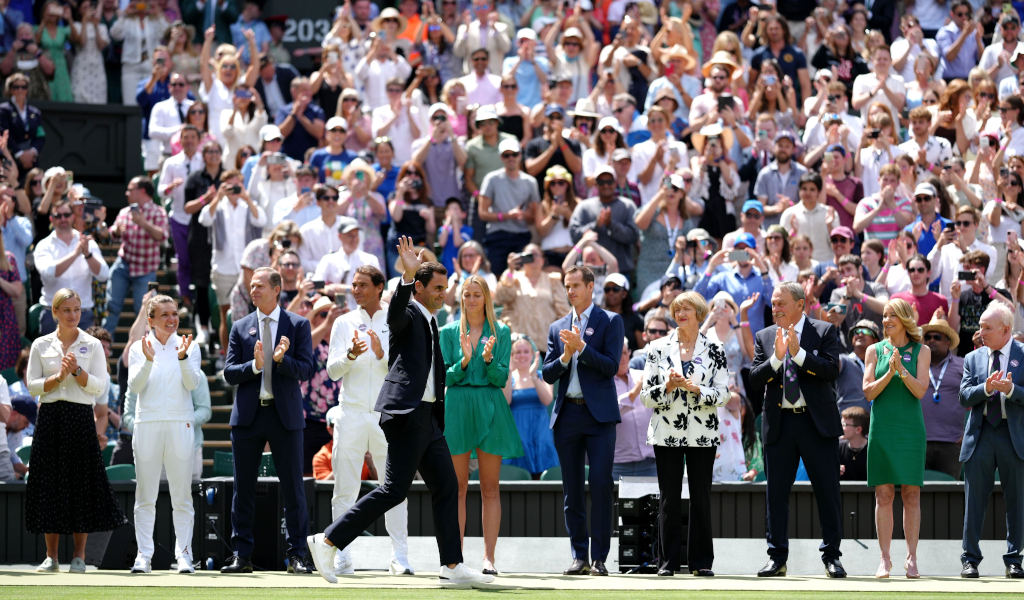 Roger Federer received a standing ovation as he returned to Wimbledon to lead a celebration to mark 100 years of Centre Court.

Absent from the tournament this year for the first time since 1997 as he continues his recovery from knee surgery, Federer received the biggest cheer in a parade of former champions.

Federer has not played a match since losing to Hubert Hurkacz in the quarter-finals here 12 months ago but is still targeting a comeback, which looks set to begin at the Laver Cup in London in September.

The 40-year-old said: “I’ve been lucky enough to play a lot of matches on this court. It’s great to be here with all the other champions. My biggest wins, my biggest losses. One of my big highlights was walking out here in 2001 with Pete Sampras.

“I hope I can come back one way or another. Of course I’ve missed being here. I knew walking out last year it was going to be a tough year ahead. It’s been a rough year but I’ve been happy at home.”

Organisers might have been apprehensive about the reception three-time singles champion Margaret Court, who has been widely criticised for her views on gay marriage, would receive but, although not as effusive as for many others, there was polite applause.

There were some notable absentees, including seven-time singles champions Pete Sampras and Serena Williams and nine-time winner Martina Navratilova, who has been forced to stay away from the All England Club after testing positive for coronavirus.

Andre Agassi, Jimmy Connors, Steffi Graf, Boris Becker, Maria Sharapova and Virginia Wade were others missing from the parade while 1961 champions Laver and Angela Mortimer could boast the most long-lasting links to Centre Court.

The ceremony ended with another standing ovation for former semi-finalist Barker, who is in her final year of presenting duties for the BBC.

Barker, who has had to deal with many emotional players following final defeats, shed tears of her own on Centre Court at the reception.

“John McEnroe will be sent to Court 17 for going off script but thank you, that really does mean the world to me,” she said.